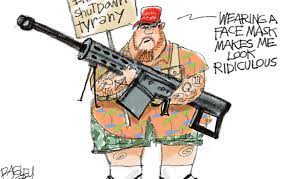 Rational thought seems to be a lost and forgotten trait in this country if the 19th July 2021 is anything to go by. It was billed as “Freedom Day”; even though a passport which is supposed to grant the bearer freedom to pass without let or hindrance, is still not worth the paper it’s printed on, thanks to the tyrannical rules set by the Government to both leave and enter the United Kingdom.

But nevertheless, 19th July was supposed to be the day social distancing was scrapped, nightclubs opened again, and face masks were no longer required to be worn in indoor public spaces by law.

However, it seems the only thing that really changed on “freedom day” is that nightclubs opened their doors again, and even then Boris Johnson put a dampener on the “freedom” part of that by announcing vaccine passports will be a legal requirement to enter nightclubs by the Autumn.

I fully expected to be surrounded by people on the 19th who had binned the face masks despite wearing them just hours earlier on the Sunday. In my head I was looking forward to berating them for it. You should wear a face covering because you believe it works. Not because the government tells you to.

It was extremely disappointing to find that despite the change in the law everywhere I turned another facemask clad cultist darkened my door hole. People were wearing them in cars, despite being on their own. Cyclists were adorning them proudly despite not wearing a helmet. Children were wearing them obediently walking down the street, despite there never being a legal requirement for them to ever do so – I blame the parents.

I remember realising how gutless a majority within this country really are back then. A face mask should be worn because you believe it will protect you or others, not because the Government says you must do it. To wear it for the latter means you have relinquished control to the government when they are meant to be there to serve you.

Of course, I suspect there were other reasons people wore them, such as the fear of “what the neighbours would think or say” if they were caught not wearing one in the local shop. Many people have a fear of not fitting in, and this Government and its advisors have used that to their advantage from day one, manipulating the public to police their draconian policies for them.

That is why freedom day was not just disappointing but also so surprising. There was no longer just a gutless majority in this country, there was now one clearly gripped by fear. Fear that they will catch or spread an alleged virus if they do not wear a face covering, that has killed just 0.2% of those it has allegedly infected, with the vast majority being over the age of 85 and having underlying conditions.

I could probably show them every scientific study showing the harms of wearing a face mask, how they don’t work, and how they’re more likely to become infected with “something” if they do wear one, and they would still carry on wearing a mask that’s been in and out of their pocket for the past week.

Maybe I’m wrong, maybe they are still just gutless, and scared of what the neighbours will think or say if they choose not to wear a face covering, at a time when false positive test results for the alleged Covid-19 virus are going through the roof.

The underlying reason doesn’t really matter, what matters is what it symbolises. It symbolises victory for this tinpot authoritarian Government and it’s “scientific” advisors. In sixteen months they have managed to turn the United Kingdom from the most freedom loving nation on earth into a country that is well on its way to becoming the new China, and they’ve managed to do it thanks to the compliance of the gutless majority.

You would never have dreamt in 2019 that from March 2020 and well into 2021 it would be illegal at certain times to hug a loved one, or stand up in a pub, or even just leave your home for a “non-essential” reason. But it has been.

On the one hand they could be bluffing and this could purely be a coercion tactic to force the hand of those who have not yet had the vaccine. A tactic that is illegal, I may add. They did it with holidays which worked so well for them. To those that fell for it, how is that going for you?

On the other hand, it could be both a coercion tactic and most definitely coming to fruition, in which case do we really need any more evidence that the current government has lost the plot, and the United Kingdom is firmly in the grip of tyranny?

Many people will now queue up for this experimental vaccine in their droves, not because it will protect them or others from Covid-19, but because they fear losing their right to live as a free human being.

We were told that once the vulnerable were vaccinated freedom would be restored, so you have to ask why this Government and the Scientific advisors are desperate to vaccinate every man and woman in the world?

It certainly isn’t to prevent the spread of Covid-19 because that’s not what these experimental vaccines are proven to do. They are allegedly proven to reduce the risk of hospitalisation and death, not prevent you getting it or spreading it.

Just ask Patrick Vallance who confirmed that 60% of people in hospital who allegedly have Covid-19 have been fully vaccinated.

Something much more sinister is afoot here, and I have my suspicions of what they may be. Can I confirm them as fact? No, I can’t. But there is certainly a draft of evidence to support those theories, and a draft of emerging evidence from the effects on people in the real world as well.

But I can be almost certain that if you do not want to take this experimental vaccine, and then choose to do so because this Government has coerced you into believing they will remove your rights and freedoms if you don’t, then you will live to regret it for the rest of your life, however long that may then be.

Things are really going to heat up over the next few months, they are going to be long, difficult, and infuriating, and it looks like the authorities are just getting started. But you can’t fall for the trap, you need to hold the line. If you don’t I can guarantee they’re going to come for your children next.