DID YOU KNOW that a cartel led by the British BALFOUR COMPANY sold Easter Island, and a lease was purchased by the son of a Jewish slave trader?

The ‘Maison Brander’ was a merchant corporation owned by a Jewish man called ALEXANDER SALMON.

His cartel had interests in Coconut plantations, slavery and sheep ranching.

It was the grazing of sheep which caused habitat loss for the trees – and many sheep pens were made by smashing the sacred AHU PLATFORM ALTARS which the Moai statues stand on.

The islanders became slaves, owned by Alexander Salmon and his business partner who was a convicted murderer.

Alex Salmon bought every inch of the island and was a slave driver on not only Rapa Nui, but also owned a coconut slave plantation on Taihiti.  The loss of every single tree species on Easter Island is mostly caused by SHEEP RANCHING which was introduced by the British, who profited greatly from growing coconut oil.

He used his profits from slavery on Easter Island to start plantations in Fiji and Tahiti – he even crowned himself as a king, and his son a kind of Prince. 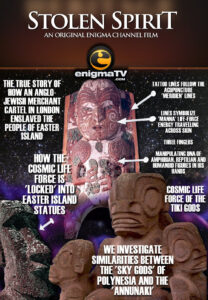