Whilst you have been distracted with Coronavirus, other more deadly and mysterious diseases have been killing people and animals all over the wold…

According to the Godfather of Israel’s Space Program, the royal-political deep state have done a deal with aliens and this would explain the chemtrailing phenomenon and would also explain why regions which the royal elite have taken over – such as Tanzania, Uganda and other African nations – are suffering from a mystery disease which makes you vomit your own internal organs and blood – and lions and chimpanzees and elephants are mysteriously dropping dead – in Botswana, a land stolen from the Kalahari bushmen by the British and Belgian royal elite in the Victorian era – we have had 400 elephants drop dead.

This is called ‘DISEASE X’ but no mainstream media and no YouTubers dare mention it.

INDIA rebelled against the royal deep state back in the 1930s and 1940s – and now today we have another mystery disease killing people in India.

Well, it is highly likely that the DEEP STATE will do some kind of DEAL with aliens – probably trading territory, minerals or even human DNA in exchange for the freedom to enslave and govern their planet on behalf of an unseen alien master race – and that would explain why the mainstream media and youtube constantly censor real UFO clips and censor information about alien abductions.

Why does the Boeing mini shuttle require cleaning by a team wearing bio-hazard suits and air filters? Obviously some biological o vial pathogen has been on board – does that means that the deep state is chemtrailing humans from space in cahoots with aliens?

COSMIC TOP SECRET is a new film by CHRIS EVERARD.

COSMIC TOP SECRET has the best, clearest footage of UFOS ever seen on film…

…But this new film is about far more than just UFOS…

COSMIC TOP SECRET proves that there is a WAR IN SPACE.

This war has been going on for DECADES.

No wonder President Trump started SPACE FORCE as soon as he had access to the Pentagon UFO files.

WHY ARE UFOS IN OUR ATMOSPHERE SPRAYING STUFF INTO THE SKY?

What is in this alien CHEMTRAIL?

WHAT IS IN OUR CHEMTRAILS?

EITHER WAY YOU LOOK AT IT – if this turns into a CHEMTRAIL WAR with neurotoxins and aliens – there is likely to be thousands of people and animals poisoned and killed by the chemtrail fallout. 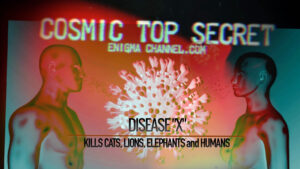