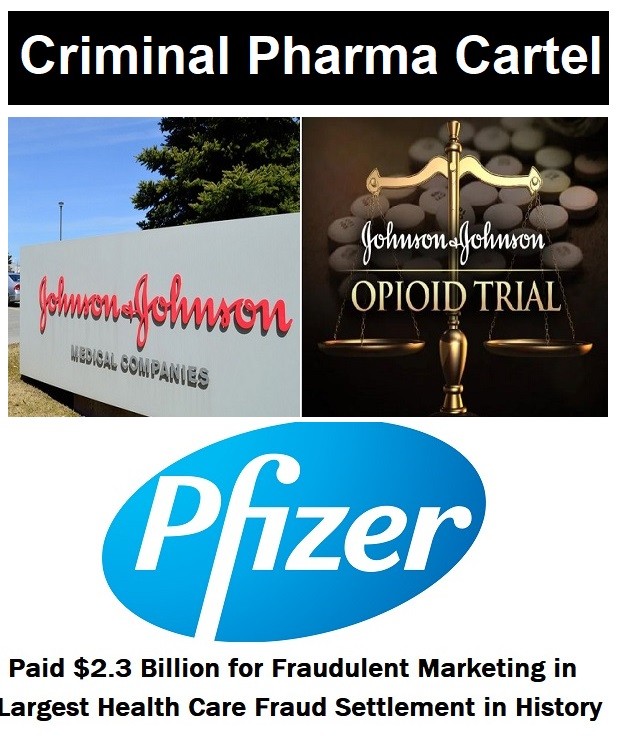 I wonder how many people who have eagerly received COVID-19 injections from Pfizer and Johnson and Johnson are aware that these are two of the largest criminal organizations in the world?

The pharmaceutical industry as a whole is the largest criminal cartel in the world, with no serious competitors.

We have covered the shady criminal past of these two companies, and the industry in general, in multiple articles in the past. See:

Pharmaceutical Industry is the Leading Cause of Death in U.S., and the Largest Criminal Group in the World

Johnson and Johnson Has Paid $BILLIONS in Criminal Settlements and Never Produced a Vaccine Before – Why Would We Trust Them for a New Experimental COVID Vaccine?

Both Pfizer and Johnson and Johnson were back in the news this week, because their products have harmed so many people.

Yesterday, it was announced that Johnson and Johnson had reached a $26 BILLION settlement to end litigation over thousands of opioid lawsuits.

Facing thousands of opioid lawsuits, Johnson & Johnson and major distributors are close to a $26 billion settlement to end the litigation, The Wall Street Journal reports.

Under the deal, J&J would pay $5 billion over nine years and the three distributors would pay a combined $21 billion over 18 years, the report says. In a recent SEC filing, J&J had already earmarked $5 billion for an “all-in settlement” that would resolve “opioid lawsuits and future claims by states, cities, counties and tribal governments.”

Over the last two decades, the opioid and addiction crisis killed roughly 500,000 Americans who overdosed on prescription and illegal opioids, the CDC says. The epidemic has sparked lawsuits from local and state governments, who claim the companies downplayed the risks of using opioids while aggressively marking them. (Source.)

And J&J has had problems with their COVID-19 “vaccine,” as well, being the only one of the three currently in use to be halted by the FDA for a while, due to serious side effects.

This made former President Donald Trump, the most pro-vaccine president the U.S. has ever had, furious, showing that he had more concern for his buddies on Wall Street in Big Pharma, than he did for the victims of the experimental injections. He wrote:

The Biden Administration did a terrible disservice to people throughout the world by allowing the FDA and CDC to call a pause in the use of the Johnson & Johnson COVID-19 vaccine.

The results of this vaccine have been extraordinary but now it’s reputation will be permanently challenged.

The people who have already taken the vaccine will be up in arms, and perhaps all of this was done for politics or perhaps it’s the FDA’s love for Pfizer.

The FDA, especially with long time bureaucrats within, has to be controlled.

They should not be able to do such damage for possibly political reasons, or maybe because their friends at Pfizer have suggested it.

They’ll do things like this to make themselves look important.

Remember, it was the FDA working with Pfizer, who announced the vaccine approval two days after the 2020 Presidential Election. They didn’t like me very much because I pushed them extremely hard. But if I didn’t, you wouldn’t have a vaccine for 3-5 years, or maybe not at all. It takes them years to act!

Do your testing, clean up the record, and get the Johnson & Johnson vaccine back online quickly.

The only way we defeat the China Virus is with our great vaccines! (Source.)

Today, it was announced that Pfizer was recalling its popular “stop smoking” drug Chantix, as it has been discovered to potentially cause cancer.

Pfizer, which put global Chantix distribution on hold late last month, is escalating its response to discovering a potential cancer-causing agent in the drug.

Pfizer has recalled 12 Chantix tablet lots with levels of the likely carcinogen N-nitroso-varenicline—a type of nitrosamine—above Pfizer’s pre-set Acceptable Daily Intake (ADI) level, the company said in a notice posted on the FDA’s website. The move expands on a recall—covering 9 lots—issued to warehouses last week.

Pfizer’s version of the drug, which also goes by the generic moniker varenicline, is currently in shortage in the U.S. The company in June said it would pause shipments worldwide over nitrosamine concerns, though a spokesperson at the time said Pfizer believed the drug’s benefits “outweigh the very low potential risks, if any, posed by nitrosamine exposure from varenicline on top of other common sources over a lifetime.” (Source.)

Hmm… Where have we heard that marketing gimmick before: “The drug’s benefits outweigh the risk”?

And they’re making this claim in regards to a drug that can help you quit smoking, but may also cause cancer??

Sadly, most Americans just blindly trust these criminal pharma cartels and their products, and will keep on using them.

But what about Moderna, the third company that is currently distributing COVID-19 shots? Where’s their rap sheet?

They don’t have one, because they have never produced a single drug, even though they have been around since 2010.

The one drug that is currently in the market, their mRNA COVID-19 shot, is not FDA approved yet, and it is their first product ever to be used on humans. They have tried for over a decade to perfect their mRNA technology to start producing drugs, but have failed.

But now through the magic of FDA emergency use authorizations, they just became one of the richest drug companies in the world by pumping out billions of doses of an experimental new “vaccine,” topping $110 BILLION in value last week as they joined the S&P 500. (Source.)

And you won’t be able to sue Moderna (or Pfizer or J&J) if you have a bad reaction to their experimental shots that could cripple or kill you, because these are not FDA approved products, and are only authorized for emergency use, which means that basically you are willingly participating in their drug trial as a lab rat.

It also probably means that your health insurance policy won’t cover your medical costs for injuries resulting from their unapproved “vaccines,” and if you die, your life insurance company will most likely not pay out any death benefits to your beneficiaries either.

That’s the price you need to pay for trusting in the wrong people, in this case the very notorious pharmaceutical cartel, and their mouthpieces, the corporate media. Not only is the corporate media bought out by Big Pharma and Wall Street, so too are the Government bureaucrat “doctors and scientists” running the government health agencies.

You didn’t know all that before you decided to take the shot? Well, that’s a shame. Because that’s how life works.

The excuse “I didn’t know” actually counts for NOTHING, and you might as well have had a criminal intent to injure yourself or your children with these toxic, experimental COVID-19 shots that are not even FDA approved, because the end result is exactly the same thing.

Half of the wood he burns in the fire; over it he prepares his meal, he roasts his meat and eats his fill. He also warms himself and says, “Ah! I am warm; I see the fire.”

From the rest he makes a god, his idol; he bows down to it and worships. He prays to it and says, “Save me; you are my god.”

No one stops to think, no one has the knowledge or understanding to say, “Half of it I used for fuel; I even baked bread over its coals, I roasted meat and I ate. Shall I make a detestable thing from what is left? Shall I bow down to a block of wood?”

Just replace the “wood” ancient man used to make idols, and replace it with other things in nature that the pharmaceutical cartel has weaponized and replaced with their poisonous products, and you will see the exact same principle involved today with people trusting in idols.