British funeral director John O’Looney has revealed to architect and film producer Robin Monotti how he experienced this “fake pandemic. “Mortality was at normal levels and was even slightly lower than 2019,” he wrote in a message on Telegram.

O’Looney said many of his colleagues turned off their refrigerators around Christmas because “nobody died. “We started vaccinating here on January 6, and then almost immediately the number of deaths went through the roof. I have never experienced such a high mortality rate in 15 years as a funeral director.” 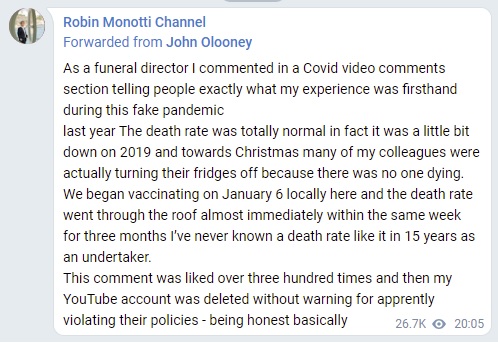 At the beginning of the “corona pandemic,” O’Looney, who lives in Milton Keynes, made headlines when he warned that bodies might remain in hospitals because next of kin could not afford a funeral or cremation due to the lockdown.

He told the BBC that all the focus was on increasing cooling capacity in mortuaries while no consideration was given to people who could not arrange a funeral due to financial difficulties.