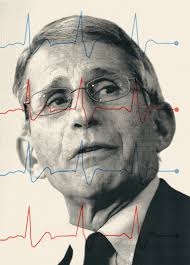 Fauci was fully apprised of the contents of McNeil’s nutty February 27, 2020 NYT podcast. He most certainly listened to it. Here, the reporter did his best to whip up a wild public panic, predicting millions of dead and calling for nationwide panic and lockdown. Crazy irresponsible!

Trying to reconstruct the timeline, I’ve scoured the Fauci emails looking for what might be Fauci’s first email mention of lockdowns.

Two days prior, Fauci was still making sense. He told CBS News in an email that “You cannot avoid having infections since you cannot shut off the country from the rest of the world… Do not let the fear of the unknown…distort your evaluation of the risk of the pandemic to you relative to the risks that you face every day…do not yield to unreasonable fear.”

Somehow, for some reason – maybe politics? – over the course of 48 hours, he flipped in the other direction.

So as far as I can tell, Fauci’s first mention of the coming school closures was in an email exchange with… Morgan Fairchild. That’s right, the famous actress from Search for Tomorrow, Paper Dolls, Falcon Crest, Murphy Brown, and my personal favorite, Pee Wee’s Big Adventure in which she played Agent Dottie.

Morgan on February 26 wrote Fauci: “I’m reaching out to see if I can help in any way to get good information out to the public, as I tried to do with AIDS. I have almost 100,000 Twitter followers and have been tweeting articles to them that I feel are helpful, but if you have any info I can help disseminate, please let me know.”

Most of Fauci’s replies to his 1,000 emails-per-day inbox are as brief as possible. Not this one. I do believe that within his response we find Fauci’s very first mention of the likelihood of lockdowns. Fauci replied as follows:

“Thanks for the note and the offer to help. It would be great if you could tweet to your many Twitter followers that although the current risk of coronavirus to the American public is low, the fact that there is community spread of virus in a number of countries besides China…poses a risk that we may progress to a global pandemic of COVID-19… And so for that reason, the American public should not be frightened, but should be prepared to mitigate an outbreak in this country by measures that include social distancing, teleworking, temporary closure of schools, etc. There is nothing to be done right now since there are so few cases in this country [NB: no way he could know this] and these cases are being properly isolated, and so go about your daily business. However, be aware that behavioral adjustments may need to be made if a pandemic occurs.”

Nineteen days later, most of the country was in lockdown. There was a reason he tapped Fairchild to be the bringer of the first hint of really bad news, aside from Fauci’s admiration and nostalgia. He needed some way to start warming up the American public to the completely unthinkable. What better way than to give a huge scoop to this beloved actress who is widely trusted?

Notice the nonchalance in his prose. Closing schools and workplaces, widespread quarantines, forced human separation – hey this is just the kind of stuff we do in a pandemic. Right? It’s just normal! Only the day before (Feb 26), Fauci had told China state media that “the USA is not in a preparative mode… our response is much different than that of China.”

Different but not that much different!

Never mind that nothing like this on a national scale was ever attempted in the history of the US.

Pandemics have come and gone in these shores for hundreds of years. Not even in 1918 were there lockdowns, while the limited quarantines didn’t work. There was limited masking and some panic in Northern California and Chicago but nothing in most cities. There were school closures in 1957 and 1968 but due mostly to absenteeism, not force.

Lockdowns as we now know them were always unthinkable, not only because they violate every principle of liberty but also because they do not work, as we know. What Fauci was contemplating here was an experiment without precedent. So just tossing off this in a passing and friendly email to this beloved actress is a pretty smart way to go about it.

To be sure, the plans had long been in the works, even dating back 15 years, but the idea of deploying totalitarian measures for COVID-19 was an idea only a few weeks old at this point.

Clearly Fauci was readying his big public-relations push. You can just imagine him sitting at his desk and thinking: “Hey, here’s a great chance to start the push, not with a press conference but from a famous actress with a Twitter following!”

What Was Fauci Thinking?

Five days later, on March 2, 2020, with lockdowns still two weeks away, Fauci received an email from Washington Post columnist Michael Gerson. He asked the following: “Is the overall strategy of social distancing just to keep the percentage of Americans who get the disease low until a vaccine is available? This seems much harder to do in a free society. Does this mean closing schools? Public transport? Do states and localities make such decisions?”

Harder to do in a free society – indeed! It should have been unthinkable.

Fauci’s answer is remarkable, and basically ended up in the Gerson column. He confirmed his lockdown plans but also gave a rationale for them. It wasn’t about the need to flatten the curve to preserve hospital capacity. That was propaganda – a lie – fed to the American people to convince them to go along. It wasn’t about waiting for a vaccine either. Fauci did not even believe that a vaccine was necessary. He said so.

What Fauci revealed in his response was his actual thinking on why we need lockdowns. He was convinced that if people stopped socializing together, the virus would essentially get bored because it could not find a host. How long was this supposed to take? A month? A year? Ten years? He doesn’t say. He was trying out a nutty idea here and just wanted to see how it worked.

Here is what Fauci wrote on this day.

“Social distancing is not really geared to wait for a vaccine,” wrote Fauci. “The major point is to prevent easy spread of infections in schools (closing them), crowded events such as theaters, stadiums (cancel events), work places (do teleworking where possible… The goal of social distancing is to prevent a single person who is infected to readily spread to several others, which is facilitated by close contact in crowds. Close proximity of people will keep the R0 higher than 1 and even as high as 2 to 3. If we can get the R0 to less than 1, the epidemic will gradually decline and stop on its own without a vaccine.”

Is his theory correct, that you can drive down the infection rate to 0 by keeping people apart and thereby cause the virus to “decline and stop?” I’ve spoken to many experts about this idea for the better part of a year and they all say absolutely not. The attempt to do so is mixing up a measurement with the thing being measured. It is conflating an effect with a cause.

Attempting to game the rate of infection (which is impossible to measure in real life with any precision) and thereby affect the fate of a virus is a bit like imposing price controls to control inflation without stopping the printing presses. It attempts to manipulate a symptom or a measurement, all without honestly dealing with the reason why the symptom and measurement exist.

Let’s just say that a powerful government can manage to achieve some weird reality in which there are no crowds, no gatherings, no travel, and no one standing closer to anyone else than six feet. Only in the fantasy world of computer gaming does such a thing work. In the real world, viruses will certainly outsmart a central planner.

Even if it did work, which it could not, the transmission will start again once people start hanging out again. You will have rolling snap lockdowns forever – which is rather like what we see in Australia today. Once a virus is here, it is not going anywhere until population immunity takes hold and protects people from getting sick from it. This is a point that still exists in first-year medical textbooks (and also 9th grade biology class) but somehow Fauci managed to replace this time-tested wisdom with a new theory concocted by himself and his friends.

Fauci’s career and reputation will not likely survive this email dump. My friends in the know have been telling me for many months now that Fauci will be sacrificed by the establishment. The lockdowns were so grim, so unAmerican, so contrary to science, and also completely failed — not only in the US but all over the world — that someone’s head needs to be on a platter. It looks like they were right: it will be Fauci.

As a sign of the times, only last week did Amazon and Barnes & Noble pull Fauci’s once-forthcoming book “Expect the Unexpected” from their website. His full discrediting is happening in real time. The man over whom all major media and large corporations fawned for the better part of 15 months seems destined to go down in disgrace.

Nor will this be the end of it. Prepare yourself for many years of this. The lockdowners themselves certainly are, as one can tell by their near silence for the last two months. The winds have changed dramatically. That’s good for the cause of human freedom.