Is this paid-for trouble, like the claimed timetabled punch-up which supposedly attracted 300 partakers.    This alleged punch-up was broadcast all day on Radio Shropshire so everyone kept away, and the media could report whatever they wanted about a deserted park.  Of course young people are desperate after a year of lockdown.  Many local boys are committing suicide.

The Quarry is a lovely tranquil place where tens of thousands of visitors go every year.  We spent some days there recently having fun with the kids surrounded by thousands of others enjoying the park, the playground and the weather.  In all my life I have never seen any trouble there.  Nor has anyone I know.  Are they importing some trouble as an excuse to start closing the place down and restricting access?  I wouldn’t be surprised as the pandemic seems like a distant unreality in such a beautiful happy place, and doesn’t fit in their grizzly media depression-soaked world.  As ever, the trusty Shropshire Star is pushing the agenda.

Is there any reality to it, or is it just more fake news?  The Quarry has limited numbers of access points, and would be easy to police.  The town centre is almost totally surrounded by the River Severn with very entry points.  If I was a criminal, really I’d set up making trouble somewhere else.

By Nick HumphreysShrewsburyPublished: 6 hours ago

Organised gang fights, drug taking and vandalism have been rife as louts have run riot in a popular park.

Shrewsbury’s Quarry has been a hive of anti-social activity in recent weeks, with a planned punch-up on one day this week attracting around 300 yobs.

Now police and civic leaders are calling on Salopians to do their bit to take the sting out of the problem by reporting issues when they see them happening.

Helen Ball, town council clerk, said an officer told her that practically every Shrewsbury bobby on shift was called to the Tuesday incident, and that the constant bad behaviour and trashing of the park was causing staff stress.

“Some people are feeling intimidated by these groups and its stopping them from wanting to use the park,” she said. “We want to urge anyone who sees anything that isn’t right to please report it to the police on 101 or 999. It’s the only way.

“We’ve got three security officers now working every evening from 5pm to 11pm, but they can’t be there all the time.

“There has been a lot of underage drinking and drug taking. It’s not what you want. It’s causing stress to staff with all the additional pressures.”

Inspector Saf Ali said: “Those who are identified as ‘persistent offenders’ may find themselves the subject of further police intervention and prosecution.

“We have been successful in securing Criminal Behaviour Orders (CBOs) against persistent offenders to exclude them from entering the town centre.

“Whilst we want everyone to have fair access to the town and enjoy the facilities, anyone causing anti-social behaviour or disruption to the wider public may find themselves the subject of such sanctions.”

A dispersal order was put in place and ran until yesterday, but officers were considering extending it over the weekend.

“Of late, the commissioning of security staff in the park has proved valuable to the police in ensuring there are resources to combat these unprecedented levels of anti- social behaviour,” added Inspector Ali.

“Officers and PCSO’s from the Safer Neighbourhood Team, as well as patrol officers, will be covering the town and anyone causing anti-social behaviour, or other related issues, will be directed to leave the area under the dispersal order.”

Leader of Shrewsbury Town Council, Councillor Alan Mosley, said: “The levels of anti-social behaviour, including underage drinking and drug taking, is extremely worrying and has caused us to take the necessary steps to increase the security presence and stamp out this type of behaviour.

“Our message is clear, we will not tolerate this kind of behaviour in the park. The Quarry is a safe place for everyone and anyone carrying out activity that stops the wider public enjoyment of this area will be brought to account.”

If anyone sees any anti-social behaviour, they are advised to report it either on 101 or 999 or the West Mercia Police online reporting channels. 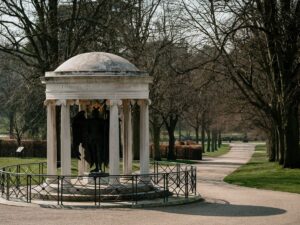 TAP – I haven’t counted the points of the sun’s rays above this macabre figure in the Quarry gardens’ war memorial in Shrewsbury.  But let’s take a guess.  33?  This is Freemasonic holy ground, not to enjoyed by poor local lads with little money.  Underage drinking in a park?  Whoever heard of such a thing?  I certainly never did it…..ahem!  Every town has its ‘problems’ already well known to the Police.  Close them down, for sure, but why should everyone else suffer?  The drug dealers operate around the bus station, but for some reason the Police leave them alone there to ply their trade.