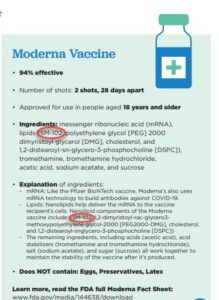 SM-102 is one of the ingredients of the Moderna vaccine.

This chemical is made by several companies including the Cayman Chemical Company. And by law they have had to produce a Material Safety Data Sheet (MSDS) for this chemical.

It begins with this:

Application of the substance/the mixture:

For research use only, not for human or veterinary use.

That should say it all. But it doesn’t. Read it for yourself:

• Suspected of damaging fertility or the unborn child.

• Causes damage to the central nervous system, the kidneys, the liver and the respiratory system through prolonged or repeated exposure.

But it gets worse. Yes, unbelievably:

The use of Chloroform in the medical industry was halted because when exposed to oxygen and UV light, it can form Phosgene Gas which was a major component in chemical warfare agents in the past – especially during World War One.

In fact, in WW1, it was used as a weaponised chemical nerve agent and was responsible for the vast majority of deaths.

And as an aside: Phosgene is also used in industry to produce many other chemicals such as pesticides.

Would you say this chemical sounds healthy or harmful?

To quote a concerned friend in the US who researched this and sent this info to me via email:

If you breathe and sit out in the sun, well… you can figure it out.

They go on to say:

When you realize what is taking place right now when it comes to this subject, you start to understand what is probably going on and the most likely outcome such a program will have on the world’s population over time.

And regarding the warning on the MSDS and repeated exposure:

• Causes damage to the central nervous system, the kidneys, the liver and the respiratory system through prolonged or repeated exposure.

According to the CDC (Centers for Disease Control and Prevention), you will need two shots to get the “most protection”.

The half-life of SM-102 is roughly 180 days before it passes out of your system. Double that time to get the full time it takes to clear out of your body. Yes, “repeated and prolonged exposure” indeed.

Are you starting to get the picture?

Vaccine ingredient “not for human use”

2 Responses to “Vaccine ingredient “not for human use””