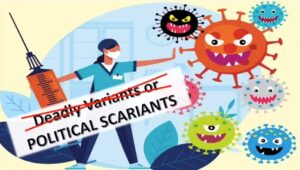 We all knew this was coming, right?

It is just beyond belief to me that there are still people who actually believe that those in our Government like Mass-murderer Anthony Fauci, and the Fake President suffering from dementia, Joe Biden, are telling the truth. What evidence do you have that they have EVER said anything publicly that is true about COVID-19?

But there it is. Fear mongering to get more people to sign up for the bioweapon shots, because now the “unvaccinated” will be blamed for this “new variant” which is neither “new” nor dangerous (if it exists at all).

This was originally posted by Ivor Cummins on Twitter, @FatEmperor, where things tend to disappear that challenge the lies of Big Pharma and government, so we also cross-posted it on our Rumble channel and Bitchute channel.

And of course Dr. Mike Yeadon has been sounding the alarm on these fake “deadly” variants for weeks now, and so we found a short video clip where he once again explains how a variant is never more than .003% different from the original virus, and how people who already have immunity from most of these coronaviruses have absolutely nothing to worry about.