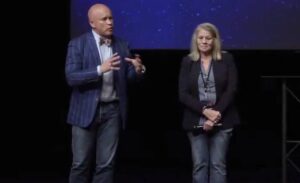 Dr. David Martin and Dr. Judy Mikovits at the Church of Glad Tidings in California in May, 2021.

The official Plandemic Documentary Bitchute Channel has just released a video from the “Free & Brave” Conference held at the Church of Glad Tidings in May, 2021.

On the night before the conference started, there was a film screening of the Plandemic documentary, which featured Dr. David Martin and Dr. Judy Mikovits.

This was apparently their first public appearance together, and they held a very informative Q&A session following the film screening.

This is a video you are going to want to watch, as it is not only very informative, but full of hope as well, and very comforting.

Their overall message is that we need to fight FEAR, and trust God.

Then Dr. Martin addresses the history of the development of the SARS bioweapon, which was originally funded for AIDS/HIV research in 1999, and he dropped this bombshell on the audience:

And it is YOUR money that has been spent.

A question was asked about who funds Dr. David Martin’s research. This is worth hearing, at the 27-minute mark of the video.

He says his business model is based on a very old, 6000 year old, business model, which is found in the first book of the Bible in Genesis, when Joseph ruled Egypt.

Because this is a Q&A session with questions from the audience, a wide range of topics were covered, including Facebook co-founder Dustin Aaron Moskovitz and the funding of Event 201, CRISPR technology, whether or not there is such a thing as a “good vaccine,” and much more.

This is from the Plandemic Bitchute Channel. We will also upload a copy to our Rumble Channel, since some people have difficulties playing Bitchute videos.