Seriously.  There are no plastics available in the USA as the only plant making plastic car parts closed.   The office distributing plastic parts in the USA is also closed.  To find out information about the availability of plastics in  the USA, traders have to call the European office , where a single manager runs Europe and the USA.  I know this information because I met him recently and he explained to me that the simple truth is that in two years time there will be no new cars available.

The price of second hand cars is rising for a very good reason.  Soon they will be all that’s available.  Buying a new Merc in the UK you wait six months for delivery now.  In two years time there won’t be any.  I can’t give the name of my source.  He’s being made redundant in two years time and he’s negotiated his lay-off deal.  This is really happening.

Chip manufacturers say they don’t have the capacity to quickly ramp up production for the auto industry as car sales recover. President Joe Biden last month called for $37 billion in new funding “to work with industrial leaders to identify solutions to the semiconductor shortfall.” He also signed an executive order calling for a 100-day review of supply chains. It’s unclear how soon any of the measures might boost production and help refill the order pipeline.

Adding to the crisis, some manufacturers are running out of critical petroleum-based products after the recent freezing weather in Texas led to shutdowns of key petrochemical plants. Industry analysts expect shortages of plastics and petroleum-based automotive products, especially seating foam.

It is a particularly tough time for the auto industry. North American manufacturing was halted for about two months last spring because of the pandemic. Since they reopened, automakers have struggled to refill showrooms. Inventory on U.S. dealer lots is down by at least a million vehicles compared to what would be normal this time of year, according to the research company J.D. Power.

Consumers are feeling the pinch in several ways, analysts said. Buyers may find it harder to find the exact models they want, especially when it comes to color and accessories. With supplies short, meanwhile, automakers have cut back on incentives, while salespeople have less need to cut deals.

But idling production and reducing sales will have a big impact on the collective bottom line. Ford warned that the chip shortage alone could reduce earnings by $1 billion to $2.5 billion this year. General Motors put its number at $2 billion. While Honda didn’t put out a dollar figure, it warned last month that it expects to sell about 100,000 fewer vehicles worldwide this year solely because of the chip shortages. 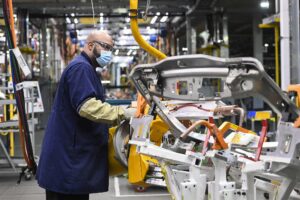 TAP.  They can blame COVID, weather or whatever, but the source I spoke to  says that car manufacturing will be halted within two years as a matter of deliberate policy.  This Prince Charles’ Great Reset, and the sustainability agenda.

4 Responses to “No cars for sale in two years from now.”