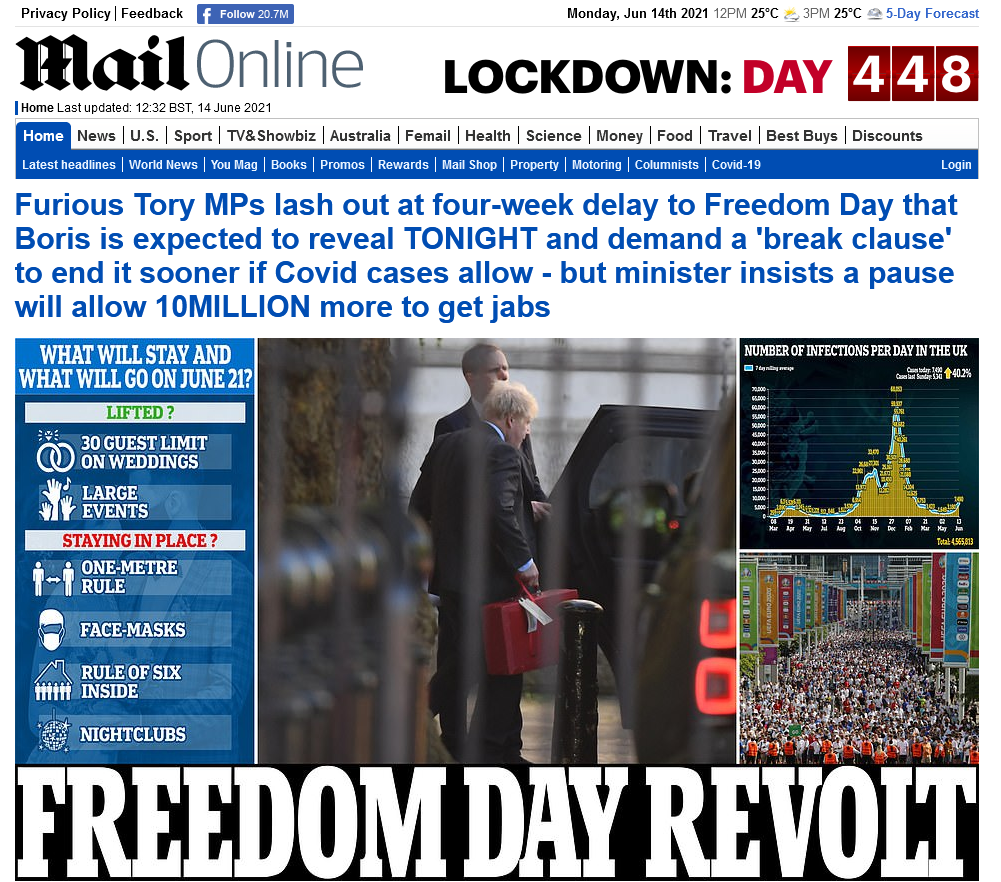 Ian Crane used to say “The media is not there to tell the truth … it’s there to control the narrative”. How right he was. He also used to say the three tools used against us are Apathy, abdication and wilful ignorance.

The headline story on the Daily Main online now (13.01 GMT 14/06/2021) is a fine example of abdication. Humans like a quiet life. They don’t want trouble, they don’t want to protest. The best the British will ever do is write a stiff letter. Generally if they think someone else is doing something they themselves won’t bother. This story implies there is hope. Hope can be romantically powerful or foolishly misplaced.

Which side of the argument/politics/media/narrative/history do the rulers control? All sides. All the time we think the MPs are “furious” we’ll sit back and leave it to them. Of course in truth they’re not furious. They’re bought and paid for opposition doing exactly as and what they’re told. Remember they can tell “The Noble Lie” and get away with it. As long as it’s in the interest of the crown and state. The people are irrelevant.

Of course the informed Tap reader knows this. I post in the hope that new readers take something from the post and their minds starts to ask questions. Events today don’t pass the smell test. That’s always a good indicator.

Maybe the day of a million good and true people peaceful standing outside parliament demanding they all leave their posts and walk away is coming. If it isn’t just yet hopefully headlines like this bring that day ever so slightly nearer.

Honourable gentlemen. If you really are “furious” then act now. You have the power to make a difference. Use it or sit on the wrong side of history … and karma.

Fury comes with great energy, great power, great, force, motivation and even passion. Fury makes things happen. If the MPs are furious and nothing changes, they’re not furious. They’re in the commons bar drinking cocktails, wearing stockings and suspenders and laughing at the plebs.

“Is there a single virtue now remaining amongst you? Is there one vice you do not possess? Ye have no more religion than my horse; gold is your God; which of you have not barter’d your conscience for bribes? … In the name of God, go!” -Oliver Cromwell

If Albert Pierrepoint was still alive and working he wouldn’t be getting a day off any time soon.

2 Responses to ““Furious” or Playing the Game?”