The Philippines has had some highly publicised cases of vaccines killing large numbers of people – especially children. The Dengvaxia (vaccine for dengue fever) fiasco killed thousands. This has helped Filipinos to realise that not all vaccines are good for your health, and they are naturally cautious of the COVID vaccine. Other vaccines were used to cut population there including tetanus which programmed women so they miscarried if they became pregnant. Filipino doctors realised something was wrong and the vaccines were returned to the manufacturers. Unfortunately countries like the UK have no previous experience of earlier versions of depopulation vaccines hitting the news. AIDS was spread via the hepatitis B and smallpox vaccines, especially in Africa where 120 million died, and there too there is hesitancy to line up for a death shot, as in the Philippines. The UK with its NHS propaganda pumped out year after year is one of the last countries on earth to awaken as to the real agenda of medical intervention – which is always having a mind open for reducing your years on earth and cutting population. Filipinos are holding out against the COVID vaccine apart from the wealthier Filipinos who mostly still seem to have total faith in their doctors, which they can afford, and the poor cannot. As the wealthier all get vaccinated, many have trouble having babies when marrying, while the poor are still fertile and have bigger families. Cancer is becoming more prolific in the poor areas though as the mobile phone masts are sited to affect the population wherever possible, often placed right next to schools. They had very few cancers in the poorer areas until the mobile phone masts arrived.

Incidentally the Philippines has had very few COVID cases as the uptake of the flu vaccine is low (which is where COVID-19 comes from). There are bonuses paid to both families and hospitals in the Philippines when a COVID death is registered. The illness is seen as a money-making scam and is believed to be simply the renaming of a local flu-like illness called Trangkaso. People put on ventilators and given opiates like Fentanyl die quickly enough keeping the news narrative rolling with a few deaths to report. The majority of Filipinos see most government narratives as lies as it is, and COVID being no different. No doubt the genocidal world government will keep trying out other methods. The lockdowns in the Philippines were totally counter productive and have led to millions of extra births as all anyone could do for the last year was make babies, not being allowed out of the house!

World governments operating out of western cities have no idea what their measures turn into once translated and applied in the bundok. The phrase ‘only in the Philippines’ continues to apply.

Bundok – Bundok, with its connotations of jungly impenetrability, remoteness, and unpredictable violence, became the military slang word boondock. For these soldiers, boondock was the alien landscape, unknowable and violent as well as ecologically foreign. Once away from the Philippines, American troops applied boondock to landscapes of combat encountered worldwide. By the Second World War, the term was cemented in military language, as in boondockers, the field boots issued to Naval and Marine personnel.

Brought into nonmilitary use by returning soldiers, boondock was soon stripped of its military connotations. Boondock transformed into a descriptor of mysterious and remote, but not necessarily hostile, hinterlands. Today, the American term boondock retains little of the specific ecological and topographical descriptiveness that it had in its military context. Boondock’s wilderness today is societal and cultural rather than environmental. The wilderness of bundok, however, remains both mountainous and culturally remote, wild in spirit as well as in ecology. 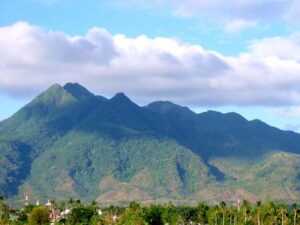 One Response to “COVID meets the BUNDOK”