GB News has ramped up pressure on the BBC by sending a letter of complaint to ministers and regulators about alleged efforts to disrupt its launch as the right-leaning news network went live on Sunday night.

Lawyers for the company have alerted media regulator Ofcom, the Competition and Markets Authority (CMA) and Oliver Dowden, the Culture Secretary, about a row over its access to political footage in an escalation of its dispute with rival networks.

The new media business – which came on air at 8pm on Sunday evening and is chaired by former BBC presenter Andrew Neil – has accused competitors of blocking its access to “pools” footage, video of public events produced by the country’s three main broadcasters.

In a letter sent to the CMA, Ofcom and the Culture Secretary, lawyers for GB News claimed that the BBC and other major broadcasters’ move could amount to “an abuse of their collective dominant position”.

They added: “If it is the case that UK pool members are conspiring to disrupt our clients’ entry to the UK news broadcasting market [this would be] wholly contrary to … fair and effective competition”.

GB News claims it had a deal with Reuters, the news agency, to supply footage of Parliament and political events produced by the BBC, Sky and ITN. The pooling system reduces the number of film crews needed at any event.

But Mr Neil’s broadcaster alleges that the agreement has fallen apart amid pressure from incumbents, with rules for accessing the video content changed from Monday – the first full day of shows on GB News.

The Telegraph understands that GB News also wrote to Reuters, and has received a response saying that the news agency is standing by the decision to block it.

A spokesman for GB News said: “This raises serious questions about competition and seeks to prevent us from reporting on democratic developments in the UK.

“We will carry on, but we won’t be able to get access in the same way to the G7 Summit, Downing Street, Covid announcements or activity relating to the opening of Parliament.”

On Sunday, ITN told The Telegraph it was prepared to licence material to GB News and had approached the BBC and Sky about striking an agreement.

An ITN spokesperson said: “As a copyright owner, ITN is legally entitled to control the way its material is copied and used by others. We have approached other pool members to propose a mechanism that would allow GB News to licence UK pool material. We are hopeful of finding a solution that works for everyone.”

A BBC spokesperson said: “We are very happy for GB News to be part of the pool and we are happy to discuss how that could happen.”

It follows a similar row in 2010 when the Press Association complained it was unable to access footage from “single camera assignments” filmed by the UK Broadcast Pool.

At the time, the BBC described the pool as “an informal working arrangement whereby television broadcasters combine their resources to cover events (sometimes very expensive and international) in a cost-effective way”.

The channel is expected to bring in an opinion-driven agenda and has sparked comparison with right-wing US channel Fox News over planned segments such as “Woke Watch”.

Mr McCoy said this weekend that comparisons to Fox News were “unfortunate” and that viewers should expect “a more friendly approach to news”.

The Department for Culture, Media and Sport did not respond to a request for comment. Ofcom declined to comment. The CMA said: “We have received the letter sent on behalf of GB News and will be considering it carefully.” 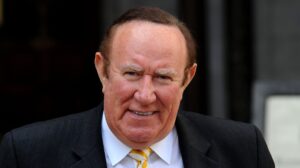