Even NASA agree with Professor FRANK DRAKE that there is a likelihood that 10,000 space-faring extraterrestrial civilisations are LIVING IN OUR OWN GALAXY…

SECRET SPACE is the companion film to Chris Everard’s book DEEP STATE. If you want to see HD FOOTAGE of UFOS flying at 3,000MPH in broad daylight over StoneHenge – then you must watch this new film by CHRIS EVERARD.

…We’re not talking about just one, or two UFOs in a single frame of blurred footage – this new documentary shows DOZENS of UFOs all filmed in broad daylight in HD from all over the world.

SECRET SPACE Vol.IV is a new THREE HOUR in-depth documentary exposing the SECRET SPACE PROGRAM and shows clear evidence that planet Earth’s atmosphere has been invaded by HUNDREDS OF THOUSANDS of UFOs.

You can stream parts 2 and 4 via the GumRoad Library, or log-in at our members site and see the first four parts of this new documentary film – click the MOVIES category and scroll to the bottom of the list to start watching SECRET SPACE Vol.IV – it’s available to everyone who has a current ENIGMA CHANNEL TV NETWORK SUBSCRIPTION. 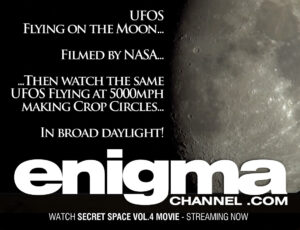