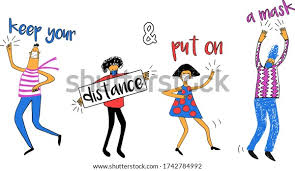 There is much more evidence supporting the fact that masks should not be worn. Over a dozen scientific papers show clearly that masks are ineffective in preventing the movement of infective organisms and/or reduce oxygen levels, and expose wearers to increased levels of carbon dioxide. Over a dozen studies failed to show that wearing a mask provides protection against infection. In 2011, a meta-analysis of 17 separate studies proved that none of the research showed masks to be useful in preventing influenza infection. The available medical evidence proves overwhelmingly that masks do no good in preventing the spread of infection but do a great deal of harm to those wearing them.

Here are some of the facts included in the second edition of my hugely popular book Proof that Face Masks do More Harm than Good.

(The book is available as a free PDF on various websites including www.vernoncoleman.org. For months now around 5,000 people a week have downloaded free copies.)

1) Dr Eric Nepute of St Louis, made a video, which went viral, telling others about what had happened to a four-year-old relative of a patient of his, who nearly died after developing bacterial pneumonia because of prolonged mask use.

2) At the University of Witten/Herdecke, Germany, an online registry has been set up where parents, doctors, pedagogues and others can enter their observations. On 20.10.2020, 363 doctors were asked to make entries and to make parents and teachers aware of the registry. By 26.10.2020, the registry had been used by 20,353 people. Parents entered data on a total of 25,930 children. The average wearing time of the mask was 270 minutes per day. Impairments caused by wearing the mask were reported by 68% of the parents. These included irritability (60%), headache (53%), difficulty concentrating (50%), less happiness (49%), reluctance to go to school/kindergarten (44%), malaise (42%), impaired learning (38%) and drowsiness or fatigue (37%).

3) Kester Disability Rights in the UK helped a disabled woman to win the first face mask discrimination case. The woman was refused access to an unnamed service because she was unable to wear a face mask, and as a result of this egregious discrimination, she was paid £7,000 in compensation. The pay-out was achieved through negotiation as there was no dispute that access had been denied, or that the Claimant had a disability exemption.

4) In February 21, The North Dakota House of Representatives passed a bill that would prohibit state and local governments, schools and businesses from ordering mask mandates. The bill’s sponsor, Rep. Jeff Hoverson who described the rules requiring face masks as ‘diabolical silliness’ also said, ‘The mask is a part of a larger apparatus of a movement of unelected, wealthy bureaucrats, who are robbing our freedoms and perpetuating lies.’

5) Fifteen million face masks provided to pharmacists in Belgium to be distributed free of charge, caused health chiefs some concern when it was discovered that the face masks might contain nanoparticles of silver and titanium dioxide that when inhaled could lead to pneumonia.

6) In March 21, a 13-year-old boy was banned from attending classes at the British International School, Stockholm in Danderyd, until he agreed to remove the face mask he was wearing. The public Health Agency of Sweden states, ‘Children do not need to wear face masks. It is difficult for children to handle and wear face masks the right way, and children are not the drivers (of infection) in this epidemic and do not spread infection in the same way as adults’.

7) A recent study in the Journal Cancer Discovery found that inhalation of harmful microbes can contribute to advanced stage lung cancer in adults. It is known that long-term use of face masks may help breed dangerous pathogens. Microbiologists agree that frequent mask wearing creates a perfect, moist environment in which microbes proliferate before entering the lungs. The invading microbes travel down the trachea and the bronchi until they reach the tiny alveoli. ‘The lungs were long thought to be sterile, but we now know that oral commensals – microbes normally found in the mouth – frequently enter the lungs due to unconscious aspirations,’ reported Leopoldo Segal. Study Author and Director of the Lung Microbiome Program and Associate Professor of Medicine at New York University Grossman School of Medicine. According to the study, after they have invaded the lungs the microbes cause an inflammatory response in proteins known as cytokine IL-17. ‘Given the known impact of IL-17 and inflammation on lung cancer. We were interested in determining if the enrichment of oral commensals in the lungs could drive an IL-17-type inflammation and influence lung cancer progression and prognosis,’ said Segal. Whilst analysing lung microbes of 83 untreated adults with lung cancer, the research team discovered that colonies of veillonella, prevotella, and streptococcus bacteria, which may be cultivated through prolonged mask wearing, are all found in larger quantities in patients with advanced stage lung cancer than in earlier stages. The presence of these bacterial cultures is also associated with a lower chance of survival and increased tumour growth regardless of the stage.

8) Each month, it is estimated that 129 billion face masks and 65 billion gloves are used and disposed of globally. A lot of this waste is ending up in landfills, waterways and oceans, which is having a harmful effect on wildlife – particularly sea life. Non-reusable masks, which are made out of plastics such as polypropylene, take around 450 years to biodegrade, making them just as environmentally unfriendly as plastic carrier bags.

9) According to the UK Government’s website (at the time of writing), the following do not need to wear a face covering:

1) children under the age of 11 (Public Health England does not recommend face coverings for children under the age of 3 for health and safety reasons)
2) people who cannot put on, wear or remove a face covering because of a physical or mental illness or impairment, or disability
3) where putting on, wearing or removing a face covering will cause you severe distress
4) if you are speaking to or providing assistance to someone who relies on lip reading, clear sound or facial expressions to communicate
5) to avoid harm or injury, or the risk of harm or injury, to yourself or others – including if it would negatively impact on your ability to exercise or participate in a strenuous activity
6) police officers and other emergency workers, given that this may interfere with their ability to serve the public.

10 .The UK Government’s website has this to say about exemption cards:

11. There is a considerable amount of evidence from around the world to show that politicians who have ordered the public to wear face masks have themselves benefitted financially. For example, in the UK the National Audit Office found that companies recommended by MPs, peers and ministers’ offices were given priority as the Government sought to obtain Personal Protective Equipment.

At no previous time in history have large numbers of people been forced to wear masks. The long-term physical and psychological consequences are unknown though those ordering that masks be worn are no doubt aware of the extraordinary risks and of the way that masks can be used to oppress and subjugate a population. The evidence clearly shows that mask wearing is likely to do no good but a great deal of harm. The big lie, which the WHO, governments everywhere and YouTube want to disseminate, is that wearing masks is essential to control covid-19. But the medical and scientific evidence (banned by YouTube and most mass media) shows that masks have little or no useful effect but can increase the risk of infection and can make breathing difficult. There is little doubt that masks do far more harm than good. Cloth masks are permeable to 97% of viral particles. A study by the University of East Anglia concluded that wearing masks was of no benefit and could increase infection. Experts in respiratory disease and infection protection from the University of Illinois have explained that face masks have no use in everyday life – neither as self-protection nor to protect other people. A study published in the Annals of Internal Medicine concluded that neither fabric masks nor surgical masks can prevent the spread of covid-19 by coughing. An article in the New England Journal of Medicine, published in May 2020 concluded that masks offer little or no protection and that the call for masks to be compulsory was an irrational fear reflex. A German study showed that masks had no effect on infection rates. Dr Fauci, the American covid-19 supremo, expressed real doubts about masks. On May 28th 2020, he admitted masks are little more than symbolic. Virtue signalling. A meta study on influenza, published in May 2020 by the CDC in America, found that face masks were of no help. The available evidence shows clearly that masks do not work but do have the potential to cause a variety of health problems – including short-term problems such as breathlessness and long-term problems such as brain damage and death. And yet, despite all this, there have been suggestions from various authorities that mask wearing and social distancing will need to be permanent. It has also been suggested that masks should be worn in the home. The sceptical will find it impossible to avoid the conclusion that there is far more to masks (and compulsory mask wearing) than meets the eye.

Don’t forget to download (and read) your free copy of the PDF of Proof that Face Masks Do More Harm than Good. And send copies to everyone you know.

2 Responses to “Why on Earth Do People Wear Masks?”