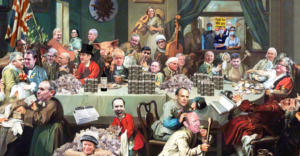 A wee confession – I used to be of a socialist bent, falsely believing that authority as claimed by govern-ment could be used to tweak the behaviours of people and that an ‘unfair’ society could be somehow equalised by and through a progressive tax system.

That is mildly embarrassing but it would be more shameful if I had not wised up to the realities of life. After all, the follies of youth are many and are there to be learned from. Suffice to say, my naive belief in ‘gov’ as a necessary and valid mechanism for establishing ‘fairness’ in society was shattered by the Blair Government of 1997 onwards. The blatant falseness of Blair left me nauseous and I swiftly reached the conclusion that the Con-Lab parties were simply 2 cheeks of the same arse:

Politicians are like diapers, they need to be changed often, and for the same reasons.
-Mark Twain

However, there is a certain mindset in most people which is clearly stunted. When one has not learned those lessons and reaches middle age and beyond, still believing in discredited systems of control, then it is fair to say one is something of a fuckwit.

Behavioural Science and the manipulation of the people is what the Tavistock institute is all about. These psychotic pseudo scientists have been advising the treacherous tyrannical UK government with the techniques for manipulating the population into levels of paranoia that make the people easy to manipulate.

The perceived level of personal threat needs to be increased among those who are complacent, using hard-hitting emotional messaging.

The entire edifice of Behavioural Science and Psychiatry is one which not only is engaged in influencing and shaping the behaviour of the flock but also serves the outliers for the pharmaceutical industry whose psychotropic drugs are ruining the minds and health of those who consume them and whose prescriptive use leads to massive profit for the producers.

Psychiatrists are pedlars of Snake Oil – the products of Big Pharma and its hold over the fake medical establishment have been well-established and the Great Lurgy Psy-Op is built upon the quakery that there is a pill for every health condition, mental or physical.

Their motivation? As ever, follow the money for that is the motivation of the whore, a term that is appropriate in this context:

• debase oneself by doing something for unworthy motives, typically to make money: he had never whored after money.

To return to my initial point about growing up and away from the authoritarian iniquities of socialism, it is an old maxim that if an individual has not dropped the false beliefs of his younger self, then he has not become wise. Wise to the nefariousness of socialism and all forms of govern-mental control.

Those who continue to hold such beliefs and publicly propagate them are useful idiots/expensively ‘educated’ fools to the would-be controllers. One such individual is an adviser on SAGE, the Scientific Advisory Group for Emergencies, an entity that is self-evidently up to its gills in fraud if only on the simple fact that there is, in reality, no pandemic. She is a psychologist named Susan Fiona Dorinthea Michie.

She is not a GP or an epidemiologist, but don’t dismiss her just yet, for she is a member of the Communist Party of Britain and leads something called the ‘Human Behavioural Change Project’.

Although she is the grand-daughter of a baron, Ms Michie once referred to herself as being of ‘the working class’ while speaking in front of photos of the mass-murdering despot Fidel Castro and the equally grisly revolutionary Vladimir Lenin.

Dr. Susan Michie, a member of the British government’s Scientific Advisory Group for Emergencies (SAGE) and a frequent presence on the BBC speaking in defense of lockdowns, is a member of the Communist party. The daughter of two Marxist scientists, Michie has been a party member for 40 years.

The BBC has not covered the story. Perhaps they think it’s old news or not relevant. It’s true that Michie’s affiliation has long been known. She was married for almost 20 years to Andrew Murray, another longtime member of the Communist Party of Britain and defender of Stalin and North Korea, who served as an adviser to Jeremy Corbyn.

But it is relevant. Dr. Michie is not an epidemiologist or virologist whose politics have no connection to her work. Her expertise is behavioral science. She specializes in getting people to make different choices. How far it is appropriate for authorities to go in manipulating the behavior of free people is very much a matter relevant to politics.

Michie’s day job, when not advising Boris Johnson’s government, is at University College London’s Centre for Behaviour Change, a delightfully Orwellian name for an organization. She is the originator of the “Behaviour Change Wheel,” a “systematic way of identifying relevant intervention functions and policy categories based on what is understood about the target behaviour.” These and other innovations are promoted through UCL’s equally delightfully named Human Behaviour Change Project.

The quakery at play and the links between psychiatry and Big Pharma are as blatant as the nose on your face, as presented in this documentary from 2008, ‘Making a Killing The Untold Story of Psychotropic Drugging’

The next layer down from the Big Pharma whores is the celebrity whore who is literally shilling for the Pharmaceutical Industrial Complex when he/she encourages the population to be injected with the genetically modification substance contained in the vile vials – these snivelling shill whores are complicit in genocide, regardless of whether they know it.

4 Responses to “Whores keep on whoring”