The WHO Confirms that the Covid-19 PCR Test is Flawed: Estimates of “Positive Cases” are Meaningless. The Lockdown Has No Scientific Basis 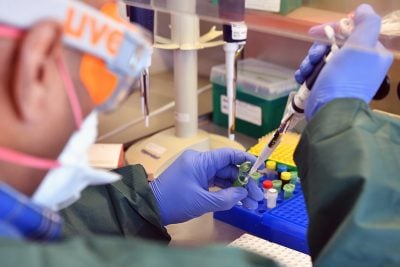 The Real Time Reverse Transcription Polymerase Chain Reaction (rRT-PCR) test was adopted by the WHO on January 23, 2020 as a means to detecting the  SARS-COV-2 virus, following the recommendations of  a Virology research group (based at Charité University Hospital, Berlin), supported by the Bill and Melinda Gates Foundation. (For Further details see the Drosten Study)

Exactly one year later on January 20th, 2021, the WHO retracts. They don’t say “We Made a Mistake”. The retraction is carefully formulated. (See original WHO document here as well as in Annex)

While the WHO does not deny the validity of their misleading January 2020 guidelines, they nonetheless recommend “Re-testing” (which everybody knows is an impossibility).

The contentious issue pertains to the number of amplification threshold cycles (Ct). According to Pieter Borger, et al

The number of amplification cycles [should be] less than 35; preferably 25-30 cycles. In case of virus detection, >35 cycles only detects signals which do not correlate with infectious virus as determined by isolation in cell culture…(Critique of Drosten Study)

The World Health Organization (WHO) tacitly admits one year later that ALL PCR tests conducted at a 35 cycle amplification threshold (Ct) or higher are INVALID. But that is what they recommended in January 2020, in consultation with the virology team at Charité Hospital in Berlin.

If the test is conducted at a 35 Ct threshold or above (which was recommended by the WHO), segments of the SARS-CoV-2 virus cannot be detected, which means that ALL the so-called confirmed “positive cases” tabulated in the course of the last 14 months are invalid.

According to Pieter Borger, Bobby Rajesh Malhotra, Michael Yeadon, et al, the Ct > 35 has been the norm “in most laboratories in Europe & the US”.

Below is the WHO’s carefully formulated “Retraction”. The full text with link to the original document is in annex:

WHO guidance Diagnostic testing for SARS-CoV-2 states that careful interpretation of weak positive results is needed (1). The cycle threshold (Ct) needed to detect virus is inversely proportional to the patient’s viral load. Where test results do not correspond with the clinical presentation, a new specimen should be taken and retested using the same or different NAT technology. (emphasis added)

“Invalid Positives” is the Underlying Concept

This is not an issue of  “Weak Positives” and “Risk of False Positive Increases”. What is at stake is a “Flawed Methodology” which leads to invalid estimates.

What this admission of the WHO confirms is that the estimate of covid positive from a PCR test (with an amplification threshold of 35 cycles or higher) is invalid. In which case, the WHO recommends retesting:  “a new specimen should be taken and retested…”.

The WHO calls for “Retesting”, which is tantamount to “We Screwed Up”.

That recommendation is pro-forma. It won’t happen. Millions of people Worldwide have already been tested, starting in early February 2020. Nonetheless, we must conclude that unless retested, those estimates (according to the WHO) are invalid.

I should mention that there are several other related flaws regarding the PCR test which are not addressed in this article. (See Michel Chossudovsky’s E-book:  The 2020 Worldwide Corona Crisis: Destroying Civil Society, Engineered Economic Depression, Global Coup d’État and the “Great Reset”  (Chapter III)

From the outset, the PCR test has routinely been applied at a Ct amplification threshold of 35 or higher, following the January 2020 recommendations of the WHO. What this means is that the PCR methodology as applied Worldwide has in the course of  the last 12-14 months led to the compilation of faulty and misleading Covid statistics.

And these are the statistics which are used to measure the progression of the so-called “pandemic”. Above an amplification cycle of 35 or higher, the test will not detect fragments of the virus. Therefore,  the official “covid numbers” are meaningless.

It follows that there is no scientific basis for confirming the existence of a pandemic.

Which in turn means that the lockdown / economic measures which have resulted in social panic, mass poverty and unemployment (allegedly to curtail the spread of the virus) have no justification whatsoever.

According to scientific opinion:

“if someone is tested by PCR as positive when a threshold of 35 cycles or higher is used (as is the case in most laboratories in Europe & the US), the probability that said person is actually infected is less than 3%, the probability that said result is a false positive is 97%  (Pieter Borger, Bobby Rajesh Malhotra, Michael Yeadon, Clare Craig, Kevin McKernan, et al, Critique of Drosten Study)

As outlined above, “the probability that said result is a false positive is 97%”: It follows that using  the >35 cycles detection will indelibly  contribute to “hiking up” the number of “fake positives”.

At the time of writing (mid-March 2021), despite the WHO retraction, the PCT test is being used extensively to hike up the numbers with a view to sustaining the fear campaign, justifying the ongoing lockdown policies as well as the implementation of the Covid vaccine.

Ironically, the flawed numbers based on “invalid positives” are in turn being manipulated to ensure an upward trend in Covid positives.

Moreover, those PCR tests are not routinely accompanied by a medical diagnosis of the patients who are being tested.

And now, national health authorities have issued (fake) warnings of a “Third Wave” as part of their propaganda campaign in support of the Covid-19 Vaccine.

The WHO confirms that the Covid PCR test procedure as applied is invalid. There is absolutely no scientific basis for implementing the Covid Vaccine.

Both the WHO and the scientific assessment of Pieter Borger, et al (quoted above) confirm unequivocally that the tests adopted by governments to justify the lockdown and the destabilization of national economies are INVALID.

Invalid Data and the Numbers’ Game

It should be understood that these “invalid estimates” are the “numbers” quoted relentlessly 24/7 by the media in the course of the “First Wave” and “Second Wave”, which have been used to feed the fear campaign and “justify” ALL the policies put forth by the governments:

And Now we have entered a so-called “Third Wave”. (But where’s the data??)

It’s a complex “Pack of Lies”.

It’s a crime against humanity.

Since its release on March 21, 2021, quite unexpectedly tens of thousands of people have read this article.

My intent was essentially to Refute and Reveal the Big Lie (focussing on scientific and statistical concepts) without directly addressing the broader implications of the lockdown and closure of economic activity.

This diabolical project which emanates from the upper echelons of the financial establishment (including the World Economic Forum) is destroying people’s lives Worldwide. It is creating mass unemployment, triggering famines in developing countries.

With some exceptions including Tanzania, most of the 193 member states of the United Nations have endorsed the WEF’s “corona consensus”.

The Truth is a peaceful yet powerful weapon.

Now is the time to confront those governments and demand a repeal of the lockdown policies which are triggering poverty and despair Worldwide.

The WHO’s BIG LIE is refuted by the WHO.

The alleged pandemic is a scam. That is something which cannot be denied or refuted.

And that was the object of this article.

It’s a complex scam based on “a pack of lies” with devastating consequences.

In the course of the last 14 months starting in early January 2020, I have analyzed almost on a daily basis the timeline and evolution of the Covid crisis. From the very outset in January 2020, people were led to believe and accept the existence of a rapidly progressing and dangerous epidemic.

We are at the crossroads of one of the most serious crises in World history. We are living history, yet our understanding of the sequence of events since January 2020 has been blurred.

Worldwide, people have been misled both by their governments and the media as to the causes and devastating consequences of the Covid-19 “pandemic”.

The unspoken truth is that the novel coronavirus provides a pretext and a justification to powerful financial interests and corrupt politicians to precipitate the entire World into a spiral of mass unemployment, bankruptcy, extreme poverty and despair.

More than 7 billion people Worldwide are directly or indirectly affected by the corona crisis.

I invite Global Research readers to view the Video below (which provides an overview) as well as consult my E-Book (consisting of 10 chapters) which addresses in detail the complexities of this crisis.

Also please forward this article. Your support is invaluable. 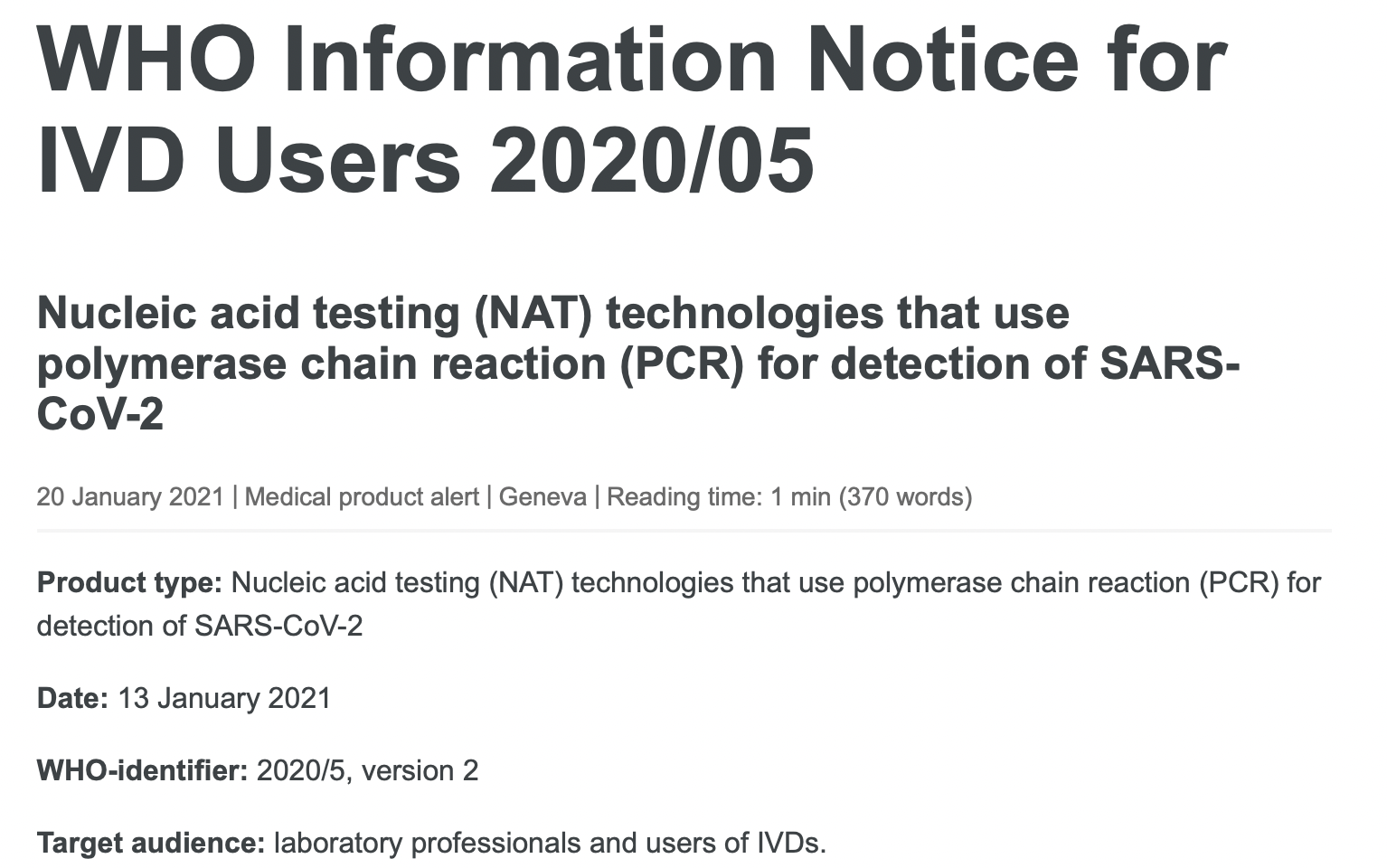 Description of the problem: WHO requests users to follow the instructions for use (IFU) when interpreting results for specimens tested using PCR methodology.

Users of IVDs must read and follow the IFU carefully to determine if manual adjustment of the PCR positivity threshold is recommended by the manufacturer.

WHO guidance Diagnostic testing for SARS-CoV-2 states that careful interpretation of weak positive results is needed (1). The cycle threshold (Ct) needed to detect virus is inversely proportional to the patient’s viral load. Where test results do not correspond with the clinical presentation, a new specimen should be taken and retested using the same or different NAT technology.

Most PCR assays are indicated as an aid for diagnosis, therefore, health care providers must consider any result in combination with timing of sampling, specimen type, assay specifics, clinical observations, patient history, confirmed status of any contacts, and epidemiological information.

Actions to be taken by IVD users:

The WHO Confirms that the Covid-19 PCR Test is Flawed