The biggest financial scam in the world

The Founding Fathers are venerated today as pious, prim and proper gentlemen.

But George Washington was no god – he was a SLAVE OWNER.

CHRIS EVERARD how the Founding Fathers are paraded as paragons of virtue. The mainstream media whitewash three important facts:

FACT 1: Most Founding Fathers kept slaves even though they supposedly campaigned against slavery – in fact BENJAMIN FRANKLIN was a major mover and shaker in the buying and selling of millions of enslaved men, women and, yes, even children and slave babies. George Washington’s home at MOUNT VERNON remained a SLAVE PLANTATION even after slavery had supposedly been abolished.

FACT 2: Many Founding Fathers were from European Hebrew families, steeped in the occult – such as kabbalah – and freemasonry. African saves aboard slave ships witnessed masonic and satanic and kabbalaistic rituals. Some slaves amalgamated the Sigils and Symbols from Kabbala, European witchcraft and Freemasonry with African shamanism – and today we call it VOODOO.FACT 3: The Founding Fathers were imposters who duped the public into thinking a REVOLUTION against the British crown had happened – When in actual fact, the British crown continued to tax – and still taxes Americans to this day.

The reason the deficit never goes away is so that secret taxes paid to the British Crown can continue every day. Most Senators and most congress people know something is very very wrong with the US economy and national deficit.

BUT WAIT – the Pentagon has officially announced that is has ‘lost’ 32 TRILLION DOLLARS – that’s 14 times the current national debt. In fact the Pentagon have lost more money than there exists officially in the whole of the US economy….

And down the street at the Federal Reserve, another staggering NINE TRILLION DOLLARS has gone missing!

A whole year subscription to the ENIGMA CHANNEL is just $30.

Click NEW TV SHOWS after logging in, and scroll all the way to the bottom of the list and then scroll back a bit, you will usually find every single one of our latest TV shows and films.

Copy the entire link including the ” https ” to our log-in in a fresh new tab on your browser.

Keep that tab open so you can watch our films easily.

Use a modern browser which does not have sneaky blocking cookies.

If you have streaming problems then try VIVALDI browser or PALE MOON browser for Linux and/or Windows.

Or you can try OPERA for Mac or PC.

Our streams play on all iOS and Apple devices using SAFARI.

TAP – The JFK scene looks like a movie set with few people looking bored as if it was take 6.  Kennedys owned RKO Studios. 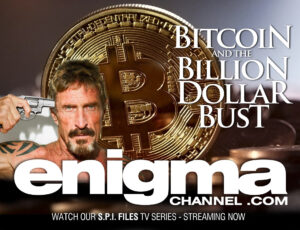 2 Responses to “The biggest financial scam in the world”