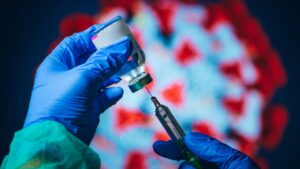 Once adjusted for sex, clinical risk factors, age and being a care home resident, these become relative risk reductions of 44% (Pfizer 1), 55% (AZ 1) and 69% (Pfizer 2). This level of reduction in the mortality rate among the vaccinated over-70s once infected is encouraging. The lack of data on deaths within 21 days of the first jab and seven days of the second jab is disappointing. Why do we have yet another study on vaccine efficacy with no accompanying analysis of safety?

The second study looks at whether vaccination protects against hospitalisation. Unlike the first study, it doesn’t look at those already infected (testing positive) to see whether they are hospitalised, but at those who are hospitalised to see whether they’ve been vaccinated. It analyses 13,907 admissions in trusts participating in a surveillance programme between December 8th and April 18th. It excludes those who caught the virus in hospital. It also excludes those whose positive PCR test was more than five days before admission (1,230 cases), the reason for which is not explained. The breakdown of admissions by sex, age and vaccination status is shown in the table below.

These figures were compared to the vaccine coverage in the population at the time to give the following results in terms of relative risk ratios (“OR” is odds ratio).

These translate to a relative risk reduction of 82% for 70-79 year-olds and 80% for 80+ year-olds after one dose, and 81% for 80+ year-olds after two doses. These are all strangely similar figures when one would expect more differences between the age groups and between being partially and fully vaccinated. It’s not clear the extent to which the declining viral incidence during the study period has been taken into account by the researchers, particularly the fact that the cases among the vaccinated will tend to be from later in the period when viral incidence was lower.

Notice also the same features seen in some earlier studies: a significant reduction immediately on vaccination and a spike in the following 2-3 weeks.

On this occasion, the authors offer an explanation.

Analysis of effects at different time intervals shows transient, lower odds of hospitalisation in the initial period post first dose. This likely represents a deferral effect, similar to that observed in other studies. It is unlikely that individuals would have been well enough to have been vaccinated and then unwell enough to have been hospitalised within one week, given that guidance states that those who are acutely unwell, or have tested positive for COVID-19, should defer vaccination. Patients are therefore less likely to be hospitalised within a short period of vaccination. This deferral effect will gradually reduce as interval after vaccination increases, which is evidenced by the increasing odds ratios in this early period before a clear vaccine effect is seen, starting from around 21 days when the odds ratio starts to decline, with a plateauing effect from day 28.

This is an important point that has been oddly absent from the interpretation of results in earlier studies. The fact that people who currently have symptomatic Covid are less likely to attend their vaccination appointment, both due to being unwell and because guidance states they should not, skews the sample of vaccinated people. It creates a problem for detecting a post-vaccination spike in infections as a spike in onset of symptoms would be expected after vaccination anyway, as those who were pre-symptomatic when attending their vaccination appointment will then immediately begin showing symptoms at the same rate as the background population (now that the selection bias of unwell people cancelling their appointment is suddenly gone).

There’s also the question of why the risk ratio never gets back up close to the unvaccinated baseline level, only to less than 0.5, despite vaccines not being expected to provide any protection for 2-3 weeks.

This study leaves me with more questions than answers. More investigation is needed of what happens post-vaccination and the patterns of infection and hospitalisation we are seeing there. There should also be much more research into the safety of the vaccines and what happens to vaccinated people in more general terms, not just whether or not they get Covid. Vaccine efficacy studies like this also need to be much clearer about how they are taking into account the background decline in viral prevalence, so we can be reassured that vaccine efficacy is not being confounded with natural decline.