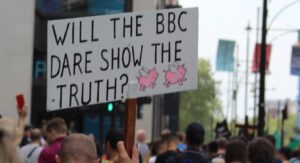 What a day! What beautiful people! What a kick in the teeth for the establishment! And not a mask in sight – except from the police who were forced to wear them. Poor things.

Were you there? If you were you might be able to spot yourself in one of these pictures from the march and rally that yesterday brought central London to a standstill. Or perhaps you can spot the poster you designed and carried.

First about the size of the rally. Some may think it is not the place of a man of my years to be climbing up onto the lions in Trafalgar Square to get some of the best exclusive photographs of a turn in the tide. They might be right. But what the photos show is the rapidly growing movement opposed to the mad perpetration of this new totalitarianism. Everyone demonstrating yesterday was a hero.

As far as the eye could see crowds of marchers filed past Trafalgar Square. 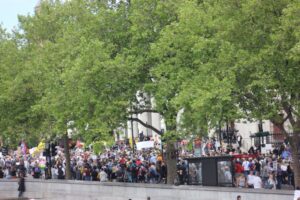 If that looks like a crowd, let me say it is the tip of the iceberg. Look at the size of the crowd coming towards Trafalgar Square from the same vantage point of Landseer’s lion at the south-east foot of Nelson’s column. 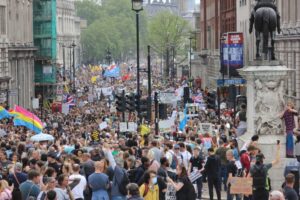 Crowds as far as the eye can see and beyond. If you were there you know just how impressive this demonstration was. If not, why not?

My mission was to distribute 1,000 stickers on behalf of Doctors for Covid Ethics (D4CE) and capture people’s posters as inspiration for future print runs. So the following photos are mainly of posters, with the odd nun or two and the odd heavily-armed riot policeman. Enjoy.

You can read more of John Goss’ work at his blog

One Response to “Loads of people, loads of photos – the demo they want you to think never took place”