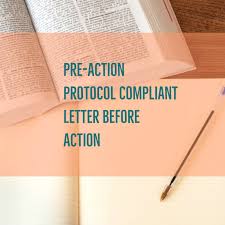 THIS LETTER BEFORE ACTION NOTICE SHOULD BE SENT TO ANYONE WHO IS:

Evidence of all communications should be kept on in a safe place for forthcoming trials.

This legal Notice of Liability Before Action is designed to be used as evidence in court if required and is intended to inform you of the facts, as well as protect you from attracting more serious civil and criminal liability in relation to your own actions and/or omissions in the context of the deployment of experimental technologies including vaccinations, chemical testing protocols, mask-wearing guidance, and medical battery including genocide.

It has come to our attention that you are involved directly or indirectly in supporting the deployment of experimental technologies that are uninsurable in terms of harm and that you are misleading others by communicating false information on the established hazards posed to human health and the environment by those experimental technologies. No adequate risk assessment has been carried out before the deployment of Covid vaccinations, the testing of asymptomatic individuals, and the enforcement of social distancing and mask-wearing. The financial benefit accruing from this agenda and these deployments is directly and indirectly funding politicians and their criminal associates who are using emergency powers to terrorize the population, who have been given falsified test data and lied to by the mainstream media, as verified in the courts.

The Council of Europe, in its resolution 2361 (2021) determined that no coercion should be applied in regard to vaccinations, no one should be discriminated against for choosing not to be vaccinated, and Covid vaccination is not mandatory. The Covid vaccinations are an illegal medical experiment in breach of numerous human rights laws and are likely to be the cause of genocide. We caution you against facilitating, supporting, promoting and administering experimental technologies, as well as mask-wearing and social distancing, all of which cause psychological and physiological harm.

Encouraging the wearing of masks laced with ethylene oxide, which is a known cancer-causing chemical, as well as toxic heavy metal nano contaminants that cause serious environmental and biological harm, especially to children, is a crime. Mask-wearing was the major contributing factor to mortality during the Spanish Flu epidemic due to bacterial pneumonia infection.

Since government guidance was issued without prior risk assessment of the potential short- and long-term psychological and physiological harms, you place yourself at risk of prosecution by following that guidance, the objective of which is provide financial gain for ministers and their advisors. The ministers and scientists driving this agenda are known to have financial stakes in the biochemical companies making the vaccines, as well as in the contracts relating to personal protective equipment and should therefore have recused themselves from any decisions regarding this planned agenda, which we now know is a genocide agenda.

Any claim on your part of ignorance of the planned genocide is no defence in law and we have prima facie evidence linking you to the facilitating of this mass genocide. Be warned that such action in support of this genocide is an indictable crime. We caution you against continuing to further this agenda and appeal to you to come to your senses and oppose the upcoming planned genocide of children in schools that is currently being proposed by domestic and international terrorists, including members of the British government.

The World Economic Forum are the lead actors in this attack on our democracy, rule of law and population to facilitate a one-world government by eliminating all private wealth and small and medium-sized businesses by 2030. This genocide was planned many years in advance.  Thousands have already died and hundreds of thousands have suffered serious debilitating injuries from this experiment, as shown in the British government’s own data on the experimental COVID-19 vaccines.

This communication is intended to inform you and others, and is sent on behalf of the people of this country, who are discovering that their current ill health is being caused by increased exposure to experimental technologies and mask-wearing. These technologies and biochemical weapons companies have been indemnified by governments across the world so that they can profit from the harm inflicted by their uninsurable technologies. Criminal investigations have already begun in a number of countries and papers have been filed in the international courts by prosecutors and law firms on behalf of the victims of these experimental technologies and of the government guidance that you are promoting. Following orders is not a defence in law, as was confirmed at Nuremberg before the execution of those who had done so.

Now that you have been clearly informed of this premeditated genocide agenda, which is intended to include you and your family, friends and colleagues, we expect you to do your duty by acting in alignment with international and domestic law. We expect you to uphold the law by preventing crimes against the people in breach of universally accepted laws and codes of behaviour, of which the following is a non-exhaustive list:

Violations of the Rome Statute can be prosecuted in the national courts of any one of the 123 nations that are States Parties to the Statute and that have adopted the Universal War Crimes Jurisdiction authority for their courts.

Letter Before Claim And Action

One Response to “Letter Before Claim And Action”