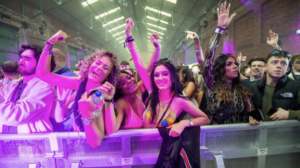 Large events with no face masks and no social distancing are just as safe as dining at a restaurant or going shopping, new data shows – so long as measures such as pre-entry Covid tests are in place. The bad news is that these findings could, according to some reports, persuade the Government to introduce vaccine passports for such events. The Times has the story.

Preliminary data from the events research programme is understood to have found that with screening, improved ventilation and other mitigating factors the risk of virus transmission can be significantly reduced, reducing fears that sports matches and concerts could cause big outbreaks.

The results will boost hopes that the end of restrictions can go ahead as planned on June 21st despite the spread of the Indian variant.

They are likely to strengthen the case for requiring “Covid-status certification” for such events to prove that those attending are at lower risk of being infectious.

The results will be forwarded to ministers in the coming days before a decision on further easing of lockdown measures due next month.

While the research programme took place before concerns over the spread of the Indian variant, it is likely to form a key plank of the Government’s plans for the reopening of society.

A Government source said the results from the trials had been encouraging and further test events were planned for the coming weeks. “We are still waiting for the final bits of data but the results so far have been very encouraging,” the source said.

“It will help make the case that these large events are not inherently more risky than other parts of the hospitality sector. It shows that there are things that you can do to make these settings as safe as other daily activities.

“It is true that they are not going to be 100% safe but you can lower the risk to a reasonable level.”

It doesn’t appear, however, that this study had any control – at least, there have been no reports of events going ahead with no mitigating measures including pre-entry testing against which to compare the results. So how can they know that the measures have “reduced transmission”? A study without a control group can’t tell us anything about how effective and necessary the intervention is.

The Government is said to have already told football’s UEFA that crowd sizes at upcoming events will be limited to 45,000. A review is expected to report on the settings in which domestic vaccine passports will be required later this month.

The Times report is worth reading in full.