I wrote my son’s school by email suggesting that the forehead temperature taking device should be used on the wrist only, in order to avoid damage to the eyes.

Some of these devices have lasers.

While they didn’t reply to the suggested point about the eyes potentially being damaged, they said in reply by return that the practice of taking the temperature of children was to be discontinued as it was no longer required.

This is the link I sent them.

Extract from article on this topic below.
Given that lasers affect the eyes I am not allowing my children to have any temperature guns pointed at their foreheads. I am asking for the wrist to be used instead and this is being accepted by the school.
https://awakeneduk.wordpress.com/2020/06/16/forehead-thermometers-are-they-safe-2/ 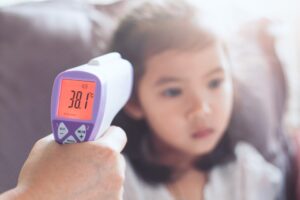 3 Responses to “Forehead temperature taking could damage children’s eyes. Use the wrist. It works equally as well.”