Authored by Martin Jay via The Strategic Culture Foundation, and ZeroHedge

Curiously, it might well be Michel Bernier who emerges as a veiled presidential anti-EU runner in France’s presidential elections in 2022 as his latest whacky idea could be the demise of the entire project.

Hardly a day passes since Brexit, when the EU doesn’t appear to be in some kind of political tailspin. The constant petulant attacks on the UK by both France and Brussels, which only make the EU look like a really sour loser, are trumped by the relentless comical calamity of a vaccine crisis.

Trade wars with the EU is probably what the hardline Brexiteers in the cabinet of Boris Johnson were expecting all along. A whole new crisis of confidence, which EU folk think will push non-Eurozone countries in the EU towards their own exit strategies, while even threatening the giants themselves like France, is happening. And at quite some speed.

Consequently the highest echelons of the EU itself are panicking and are desperate for a solution.

On the 8th of May, the EU launched a grandiose new talkshop which aims to find a roadmap for the EU itself. Given that the EU needs to find a new identity it is perhaps worrying enough, but we shouldn’t forget the last time it did this, exactly twenty years ago, when it was called The European Convention, and it failed. Under the auspices of Valerie Giscard d’Estaing, the only French President refused membership of the freemasons due to him faking his own aristocratic credentials, it imploded under a cloud of graft allegations about the former French president and his dodgy expenses while in the Belgian capital.

What finally did emerge was a new European Constitution but which in the end didn’t make it over the line after French and Dutch referendums. 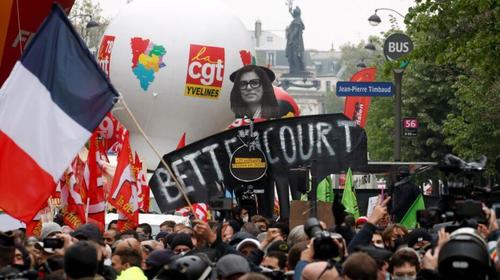 And now Brussels is at it again. Few could argue with its argument that it has a new pile of problems which need to be tackled head on. But the hardcore federalist mentality in the Belgian capital will always argue that the way out of the EU’s problems is always to take more power. This time around, this jaded mindset though met with considerable opposition from a dozen EU member states who wanted the whole conference to be played down and made distinctly low key. In the end, they couldn’t even agree on a former president to run the whole circus. Macron would have been an obvious choice but curiously he was not the man of the moment

Perhaps some in the EU believe that Macron’s inept anti Brexit stunts and blinded dogma that the EU with more power (in particular around the world) is more part of the problem rather than the solution.

The EU has massive problems which stem from its own diabolical management and growing discontent from smaller member states who previously used Britain’s power to do its bidding. Sure, climate change is a huge subject it needs to grapple. But way more importantly are the economies and immigration policies of its own vanguard member, France.

Immigration both in Germany and France has come with huge political consequences on the elite and how they govern. While Germany can weather the storm on the impact of almost 1 million Syrian refugees, Macron is showing signs that he is prepared to get tougher on all immigrants simply to stop Marine Le Pen from taking what everyone expects will be huge gains in the first round of the next presidential elections.

But he stops short of calling the EU’s Schengen policy to be scrapped.

The 1985 accord, which on paper looks like a great solution to Europeans who want free access to move around Europe but in reality is a nightmare for controlling huge swathes of migrants looking for the best asylum deal they can find.

Which is why EU darling Michel Barnier, who is planning to stand as a candidate in France’s presidential elections in 2022, has dropped a bombshell both on the EU and France by his latest declaration: he wants a five-year freeze on immigration in France.

While hacks may argue over whether there is any strong argument that this would help the French economy – some taking the view that it would at least prevent a Le Pen win – others might say that it could help France, but at the EU’s expense. If France can renegotiate its place in the EU immigration deal, then others will follow and the overall implications will be an even bigger crisis for the EU. Critics will say: “If Schengen isn’t working and we can opt out of it, what else should we opt out of?”. It will make the EU look incredibly weak and ineffective. The well worn cliché of the EU being an arbiter of the “free movement of goods, services and people” will have to be downgraded to just goods and services – which many Eurosceptics have argued for years is its best option for long term survival. A trade block. Nothing more, nothing less.

And then there is even the bigger problem of the widening gap between southern EU member states and Brussels itself. A reworked Schengen – or a scrapped one – will mean that EU member states like Italy will be obliged to contain all of their refugees themselves, rather than allow them to cross the border into other countries in their search for a better deal. That alone, could be the spark which ignites a full-on Eurosceptic momentum in Italy which calls for an exit altogether from the European Union.
Jobs for the boys

Combined, the Barnier stunt represents a new nadir for the European Union and its apparatchiks in Brussels. With a radical emergence of far-right parties already threatening to take a majority stake in the next EU elections, lowest ever confidence in the EU in key member states like Italy and Spain and a very real worry that at least one EU heavyweight will follow Britain (watch Denmark, Sweden or the Netherlands), the EU will fall on its knees with a shattered Schengen.

The end of Schengen could mark the end of the EU as we know it. And all for the political ambitions of Michel Barnier who wants to have his cake and eat it in Brussels. Like any good Europhile, Brussels has its own distinct role to play in giving jobs to the boys and this final act of getting the ultimate job at the EU’s expense is certainly going to set a new precedent; usually the EU gets its main officials from member states as politicians lose their seats and look to their own political party to give them a cosy retirement present in the Belgian capital. But Barnier is doing the opposite. The EU actually propelled him into the media limelight via the Brexit so-called “negotiations” and he’s milking it for all he can get. The huge question in the coming weeks will be how the French press treat him and how Brussels will react to this new storm on the horizon. Now the European Union has a new migraine to add to the headache of Brexit. Its demise is guaranteed if more of the big thinking is to keep on pushing for a bigger power grab. A new European constitution is not the answer if the aggregate of this delusional pontificating is that the EU somehow gets bigger. And there simply isn’t time. Something’s got to be done about Barnier.