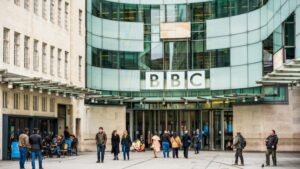 The British Broadcasting Company is the go-to source for trusted news for the majority of the UK population. In fact, “Auntie Beeb” is something of a national treasure.

It’s also the world’s leading public broadcaster and (in their words), impartial and independent.

What’s not to trust?

Most of us, however, are still under the illusion that we pay for this “impartial and independent” service via our TV licenses.

But do you know who really funds the BBC? Who the Top 10 donors are?

In 2019/2020, they funded the BBC to the tune of over £1.5 million. Even if you still think they are a worthy “non-profit fighting poverty, disease and inequity”, don’t you think they might want something in return? A little bias in the news perhaps towards promoting their core business which is vaccines?

(Tip: that old adage “follow the money” will always hold you in good stead.)

But they don’t just stop at the BBC. They also fund another favourite: The Guardian.

Nor do they stop at the media. The Bill & Melinda Gates Foundation has their fingers in lots of pies all over the world. Just take a look on their website at the grants they hand out. And use discernment.

If you think the Bill & Melinda Gates Foundation is a worthy “non-profit fighting poverty, disease and inequity”, you need to do a little more research. Start with Bill Gates. Still Think He’s A Good Guy?

Do you still trust the BBC?