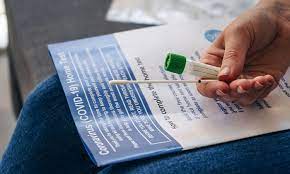 I cannot say it is all 100 percent accurate, but I will say that it is compelling. It appears the swabs under a microscope we have all seen – where they contain black spots are legit. According to this study, the black spots are lithium which assists the growth of what they are calling “hydrogel” that is also on the swab but can’t be so easily seen.

Going over the slides I did recognize one item – a “morgellons” microbe that is a weaponized GMO form of Dictyostelium discoideum which was chosen as a weapons platform because it is so able to withstand harsh conditions and immune to all antibiotics. The only thing that will wipe it out is thymol. I have actually looked into Morgellons deeply but have not posted about it here much. However, after I looked over the slides I noticed two things that are a feature of the morgellons microbe – a hook shaped structure that can penetrate cell walls, and the ability of multiple organisms to bond together and form structures. Dictyostelium discoideum has an ability to penetrate other micro organisms and cells, and it is used for both predatory reasons and sexual reproduction (that microbe has sexual, asexual, and communal reproductive abilities) and for the sexual reproduction ability it stabs itself through the microbe it is going to reproduce with. If it wants to eat another microbe it either engulfs it or stabs it. That structure is visible in one of the microscope slides.

On one of the slides you’ll see the microbes attached to each other to form a larger organism, and the stabber is showing on the one on the top.

Additionally, Dictyostelium discoideum has an ability to bond and form multi-cellular communal structures that are also a feature of morgellons. This is what the fibers and patterns are that people see in morgellons.

Look up what Dictyostelium discoideum can form in the wild, and then compare it to what morgellons forms in the body. It is a match, and there’s no way that microbe belongs on a test swab, GMO weponized form or not.

It was very convenient for the morgellons coverup – “Ah, Dictyostelium discoideum! That can’t prey on people. You contaminated your slide!” That microbe is so common such a ruse would work.