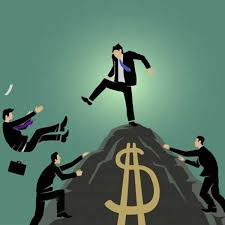 All Collude to Foist the Fifth Reich
on the Entire
Planetary Civilization.

A Thoroughly Tyrannical and Totalitarian Technocracy is
Being Stealthily Shoehorned into Place Around the Globe
by The Powers That Be (see the list above).

TPTB are using the GREAT RESET and THE GREAT SCAMDEMIC, after using THE GREAT STEALECTION to sow seeds of unprecedented chaos and conflict the world over.

The immediate goal of this manufactured disorder and naked warmongering is to divide and conquer the world community of nations as never before.  But first the New World Order globalist cabal is executing their Ordo ab Chao strategy to divide and rule all of humanity.

That’s because TPTB know full well that deeply divided families, such as we have in the United States, translates to divided communities.  In turn, the cities, counties and states are inevitably divided followed by the whole nation, which is then easily collapsed and totally taken over.

The power elite knows that many are onto their game of rape, plunder and pillage of planet Earth where every human being is considered a natural resource to be used and misused, enslaved and oppressed, shackled and subjugated for the benefit of the BEAST System.

That’s why all of humankind is currently being compelled or forced into receiving the “Mark of the Beast”.

Make no mistake, the various COVID-19 injections, shots and vaccines are the primary way in which every recipient will be slowly taken over—mind and body, heart and soul.

The fascist corporatocracy wants slaves to work on their corporate plantations, not employees.  And the power elite will proceed with this New World Order agenda unless they are stopped by We the People.

KEY POINTS: Never in human history have their been so many extremely wealthy and powerful globalists all acting in quiet collusion to conquer all of humanity.  That the power elite can simply print money and use it to carry out any criminal plot, corrupt scheme or nefarious conspiracy is a testament to their unbridled power and influence.  Hence, there is no resident on Earth who is not vulnerable to their multifarious crime waves washing over the planet such as the transparently engineered COVID-19 Plandemic.

But why are they so painfully obvious today where TPTB were quite covert in their their machinations and intrigues of yesteryear?

Because, given the rapid dissemination via the Internet of so much incriminating evidence of crimes against humanity committed by these incorrigible cabals of criminally insane psychopaths, they know that sooner or later, we are coming for them—that’s why.

Which means that raw fear of life-threatening consequences is motivating the individuals that populate the preceding list of satanic entities to a great degree.  Their many actions of extreme desperation and recklessness reflect the power elite’s resolve to ensure their self-preservation at any and all costs.

The biggest concern for “99%” of the human race is that, now that TPTB have crossed so many lines and exposed themselves as never before in world history, they are well beyond the point of no return.  It’s literally do or die for all of them, given that we all know who they are are where they live thanks to the World Wide Web.

BOTTOM LINE: The New World Order is really the Old World Order on Super Steroids… … …because the power elite have no other way out but to complete their NWO agenda.  How they will successfully accomplish this impossible task in the face 7.8 billion people who are waking up fast and furiously remains to be seen.