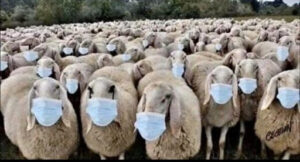 Back in October of 2020, I wrote an essay called The Covidian Cult, in which I described the so-called “New Normal” as a global totalitarian ideological movement. Developments over the last six months have borne out the accuracy of that analogy.

A full year after the initial roll-out of the utterly horrifying and completely fictional photos of people dropping dead in the streets, the projected 3.4% death rate, and all the rest of the official propaganda, despite the absence of any actual scientific evidence of an apocalyptic plague (and the abundance of evidence to the contrary), millions of people continue to behave like members of an enormous death cult, walking around in public with medical-looking masks, robotically repeating vacuous platitudes, torturing children, the elderly, the disabled, demanding that everyone submit to being injected with dangerous experimental “vaccines,” and just generally acting delusional and psychotic.

To understand this, one needs to understand how cults control the minds of their members, because totalitarian ideological movements operate more or less the same way, just on a much larger, societal scale. There is a wealth of research and knowledge on this subject (I mentioned Robert J. Lifton in my earlier essay), but, to keep things simple, I’ll just use Margaret Singer’s “Six Conditions of Mind Control” from her 1995 book, Cults in Our Midst, as a lens to view the Covidian Cult through.

1. Keep the person unaware of what is going on and how she or he is being changed a step at a time. Potential new members are led, step by step, through a behavioral-change program without being aware of the final agenda or full content of the group.

Looking back, it is easy to see how people were conditioned, step by step, to accept the “New Normal” ideology. They were bombarded with terrifying propaganda, locked down, stripped of their civil rights, forced to wear medical-looking masks in public, to act out absurd “social-distancing” rituals, submit to constant “testing,” and all the rest of it.

Anyone not complying with this behavioral-change program or challenging the veracity and rationality of the new ideology was demonized as a “conspiracy theorist,” a “Covid denier,” an “anti-vaxxer,” in essence, an enemy of the cult, like a “suppresive person” in the Church of Scientology.

For over a year now, the “New Normal” authorities have controlled the social/physical environment, and how New Normals spend their time, with lockdowns, social-distancing rituals, closure of “non-essential” businesses, omnipresent propaganda, isolation of the elderly, travel restrictions, mandatory mask-rules, protest bans, and now the segregation of the “Unvaccinated.”

Basically, society has been transformed into something resembling an infectious disease ward, or an enormous hospital from which there is no escape. You’ve seen the photos of the happy New Normals dining out at restaurants, relaxing at the beach, jogging, attending school, and so on, going about their “normal” lives with their medical-looking masks and prophylactic face shields.

3. Systematically create a sense of powerlessness in the person.

What kind of person could feel more powerless than an obedient New Normal sitting at home, obsessively logging the “Covid death” count, sharing photos of his medical-looking mask and post-“vaccination” bandage on Facebook, as he waits for permission from the authorities to go outdoors, visit his family, kiss his lover, or shake hands with a colleague?

The fact that in the Covidian Cult the traditional charismatic cult leader has been replaced by a menagerie of medical experts and government officials does not change the utter dependency and abject powerlessness of its members, who have been reduced to a state approaching infancy. This abject powerlessness is not experienced as a negative; on the contrary, it is proudly celebrated.

Thus the mantra-like repetition of the “New Normal” platitude “Trust the Science!” by people who, if you try to show them the science, meltdown completely and start jabbering aggressive nonsense at you to shut you up.

4. Manipulate a system of rewards, punishments and experiences in such a way as to inhibit behavior that reflects the person’s former social identity.

The point here is the transformation of the formerly basically rational person into an entirely different cult-approved person, in our case, an obedient “New Normal” person. Singer gets into this in greater detail, but her discussion applies mostly to subcultural cults, not to large-scale totalitarian movements. For our purposes, we can fold this into Condition 5.

5. Manipulate a system of rewards, punishments, and experiences in order to promote learning the group’s ideology or belief system and group-approved behaviors. Good behavior, demonstrating an understanding and acceptance of the group’s beliefs, and compliance are rewarded, while questioning, expressing doubts or criticizing are met with disapproval, redress and possible rejection. If one expresses a question, they are made to feel that there is something inherently wrong with them to be questioning.

OK, I’m going to tell you a little story. It’s a story about a personal experience, which I’m pretty sure you’ve also experienced. It’s a story about a certain New Normal who has been harassing me for several months. I’ll call him Brian Parks, because, well, that’s his name, and I no longer feel any compunction about sharing it.

Brian is a former friend/colleague from the theater world who has gone full “New Normal” and is absolutely furious that I have not. So outraged is Brian that I have not joined the cult that he has been going around on the Internet referring to me as a “conspiracy theorist” and suggesting that I’ve had some kind of nervous breakdown and require immediate psychiatric treatment because I do not believe the official “New Normal” narrative.

Now, this would not be a very big deal, except that Brian is impugning my character and attempting to damage my reputation on the Facebook pages of other theater colleagues, which Brian feels entitled to do, given that I am a “Covid denier,” a “conspiracy theorist,” and an “anti-vaxxer,” or whatever, and given the fact that he has the power of the state, the media, etc., on his side.

This is how it works in cults, and in larger totalitarian societies. It isn’t usually the Gestapo that comes for you. It’s usually your friends and colleagues. What Brian is doing is working that system of rewards and punishments to enforce his ideology, because he knows that most of my other colleagues in the theater world have also gone full “New Normal,” or at least are looking the other way and staying silent while it is being implemented.

This tactic, obviously, has backfired on Brian, primarily because I do not give a fuck what any New Normals think of me, whether they work in the theater world or anywhere else, but I am in a rather privileged position, because I have accomplished what I wanted to accomplish in the theater, and would rather stick my hand in a blender than submit my novels to corporate publishers for review by “sensitivity readers,” so there isn’t much to threaten me with.

That, and I have no children to support, or administrations to answer to (unlike, for example, Mark Crispin Miller, who is currently being persecuted by the “New Normal” administration at NYU).

The point is, this kind of ideological conditioning is happening everywhere, every day, on the job, among friends, even among families. The pressure to conform is intense, because nothing is more threatening to devoted cultists, or members of totalitarian ideological movements, than those who challenge their fundamental beliefs, confront them with facts, or otherwise demonstrate that their “reality” isn’t reality at all, but, rather, a delusional, paranoid fiction.

The key difference between how this works in cults and totalitarian ideological movements is that, usually, a cult is a subcultural group, and thus non-cult-members have the power of the ideology of the dominant society to draw on when resisting the mind-control tactics of the cult, and attempting to deprogram its members…whereas, in our case, this balance of power is inverted.

Totalitarian ideological movements have the power of governments, the media, the police, the culture industry, academia, and the compliant masses on their side. And, thus, they do not need to persuade anyone. They have the power to dictate “reality.” Only cults operating in total isolation, like Jim Jones’ People’s Temple in Guyana, enjoy this level of control over their members.

This pressure to conform, this ideological conditioning, must be fiercely resisted, regardless of the consequences, both publicly and in our private lives, or the “New Normal” will certainly become our “reality.”

Despite the fact that we “Covid deniers” are currently outnumbered by the Covidian cultists, we need to behave as if we are not, and hold to reality, facts, and real science, and treat the New Normals as exactly what they are, members of a new totalitarian movement, delusional cultists run amok. If we do not, we will get to Singer’s Condition 6…

6. Put forth a closed system of logic and an authoritarian structure that permits no feedback and refuses to be modified except by leadership approval or executive order. The group has a top-down, pyramid structure. The leaders must have verbal ways of never losing.

We’re not there yet, but that is where we’re headed … global pathologized totalitarianism. So, please, speak up. Call things what they are. Confront the Brians in your life. Despite the fact that they tell themselves that they’re trying to help you “come to your senses” or “see the truth,” or “trust the Science,” they are not.

They are cultists, desperately trying to get you to conform to their paranoid beliefs, pressuring you, manipulating you, bullying you, threatening you. Do not engage them on their terms, or let them goad you into accepting their premises. (Once they’ve sucked you into their narrative, they’ve won.) Expose them, confront them with their tactics and their motives.

You will probably not change their minds in the least, but your example might help other New Normals whose faith is slipping to begin to recognize what has been done to their minds and break with the cult.