Yves here. It may seem odd to commemorate the death of Prince Philip, since the British monarchy is a hoary symbol of [take your pick of positive or negative associations] whose main purpose today is brand-building. Yet even today, the Royals exercise influence over politics (one recent article described the Queen’s extensive but quiet lobbying in defense of her tax havens), opinion, and fashion. A bare minimum, they are billionaires whose deal with the British public is they get to rattle around their drafty castles, have staff and allowances, in return for looking useful and making lots of appearances. One friend explained that the reason Meghan was so quickly unhappy with her new role was that she didn’t understand the job description. No, you do not fly on private jets. Yes, you spend about 100 days a year in Bumfuck England cutting ribbons at hospital openings and the like. Diana loved hobnobbing with ordinary people and basking in their appreciation of attention from a Royal. Meghan can’t abide regular folks.

As this article explains, Prince Philip lived through the long decline of British power and along with it, a reduction in the role of the throne.

By Adam Ramsay (@adamramsay), openDemocracy’s main site editor. @adamramsay. Adam is a member of the Scottish Green Party, sits on the board of Voices for Scotland and advisory committees for the Economic Change Unit and the journal Soundings. Originally published at openDemocracy 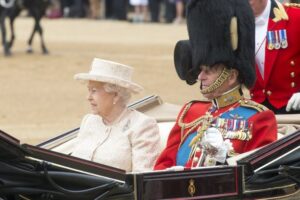 In the year before Prince Philip was born, 1920, the British empire was the largest it would ever be. The year after he was born, 1922, Charles Francis Jenkins demonstrated the first principles of the television.

The changes driven by decolonisation and the invention of the modern media, between them, could easily have ended the reign of the House of Windsor. The fact that they didn’t, the success of the British monarchy in transitioning from the divine rulers at the apex of history’s biggest empire to the celebrities at the centre of a modern nationalist project built on TV and the tabloids, was, in large part, because of the duke of Edinburgh, who died today at 99.

As chair of the Queen’s coronation committee in 1953, Philip proposed a radical idea: why not televise it? The result was the most-watched TV show in history at the time, doing more than anything else to make television a mainstream medium.

The next day, a Daily Express journalist wrote that the show “set up brilliant new standards in linking the crown with the people”; viewers, he said, “virtually rode with the Queen through London and stood near to her in the ancient Abbey itself”.

By grabbing such a vast audience and directly – or so it seemed – involving them in the once-distant rituals of the state, Philip fathered a whole new phenomenon. And the tension between the institutions he pulled together – TV, the tabloids, and the monarchy – became the tripod on which Anglo-British nationalism hung, as the empire fell apart.

Philip also became an icon of this world view: his racist ‘jokes’ were carefully delivered in a cheeky tone as if he was a naughty boy mocking some kind of power, when in reality, he was the one with the power. It’s a tone he perfected: I remember him using it when we joked together on the three occasions I met him. But what they hid was something more insidious.

Philip’s uncle and mentor, Louis Mountbatten, was the man who did more than anyone else to partition India. Indeed it was extraordinary that William Windsor named his son Louis after one of the greatest criminals of late empire and yet has since gone on to say the monarchy is “very much not a racist family”.

The atrocities of the late British empire – from concentration camps in Malaysia to castrations in Kenya – were quietly ignored. The decorative function of the monarchy was always intended to mask the violence of the state, and Philip played a vital role in bringing that screen to life in the 20th century.

If modern nations are imagined communities convened by the media and feudal states were family affairs, then the new relationship he arranged fused the one with the other, giving birth to a gaudy heritage of Churchillism, imperial revisionism, Thatcherism and, most recently, Brexit.

Of course this relationship was always tense. But it was Diana who briefly mastered it, before it killed her. As Anthony Barnett has argued in his book ‘The Lure of Greatness’, she transformed herself into the first celebrity populist, who Trump obsessed over.

Now, the godfather of Anglo-British nationalism has died just as it enters a crisis, with riots in Northern Ireland as Loyalists realise the risk of Ireland uniting, elections in Scotland likely to advance the movement for independence, the Harry-and-Meghan rift and a deep loss of faith in the British ruling class.

And so we can expect the institutions of the Anglo-British nation to desperately peddle their usual message. The BBC’s Nicholas Witchell, a wibbling belligerent of monarchical propaganda, is already prostrating himself on television. Tomorrow, the tabloids will smear themselves in red, white and blue. Conservative politicians and the Labour figures who like to hide behind them will bellow mournful tears of sorrow.

But the truth is that 99-year-olds die, and their eras dissipate.

TV and tabloids are no longer the vivid and exciting formats they once were. They’ve been replaced with social media and streaming websites, which have formed different kinds of audience: audiences who aren’t amazed simply to be allowed to watch the affairs of state, but insist on participating in them; audiences who it’s much harder to bind into national borders and tell which ‘we’ they belong to. Audiences who, through their connections with each other, find their understandings of the world start to shift. Audiences who, in the case of Netflix’s ‘The Crown’ are now able to access a less propagandised version of their history than the British press presents.

Harry and Meghan’s split from the royal family was driven by this divide: they wouldn’t tolerate being bound into the toxic racism of tabloid Britain, and instead launched themselves as a transatlantic king and queen of Instagram. And they represent a generation. Anglo-British nationalism has largely failed to make the leap into modern media. For younger generations on the UK’s periphery, Scottish, Welsh, and Irish or Northern Irish identities are more common. And for England, who knows?

Anglo-British nationalism was already waning. Today, its godfather passed away. And once its mother has gone, who knows how long it will survive?