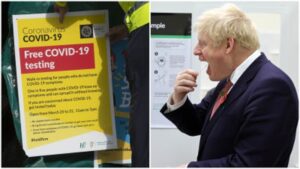 You’ll no doubt be aware of it by now. The Prime Minister wants every man woman and child to to take two covid-19 tests a week. Read my previous article if this is the first you’ve heard of it.

Johnson will address the nation from Downing Street’s new media room at 5 pm. He’ll be flanked by two of the usual SAGE goons. The PM will try and sell his national mass testing plan to a totally fed-up public. It has previously been dubbed the “moonshot.”

It is insane. It is unprecedented and it is 100 per cent tyrannical. Unprecedented because no government in history has asked its healthy citizens to subject themselves to routine testing for a virus. Why would a healthy person take a test? It’s totally illogical. Tyrannical because the government is promising that compliance is the way to hasten the removal of restrictions. 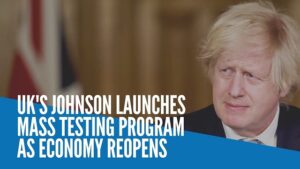 Is there anyone who still believes that this is about a virus? More than half the population has received a vaccine. The so-called vulnerable have all had two doses. Hospitals are quiet (they were never busy), cases numbers are insignificant and there are few deaths.

Last week, UK Chief Medical Officer Chris Whitty said that the country cannot lock down again and that we’ll have to learn to live with Covid just as we live with the flu. Whatever covid is or was, it is on the way out. The vast majority of us either never had it, or if we did, we didn’t even know as the symptoms were so mild.

I strongly suspect  that covid is the flu rebranded. I say suspect, because in the end, what the hell do I know? I do know though, that they told us that the flu disappeared. Again, does anyone believe that? I still chuckle when I think that people bought that horseshit.

So whatever it is or was, it’s nearly done. Yet the government is sending mass testing kits to every home in the country. The government wants us to carry digital covid certificates to get into the pub or the cinema.

I don’t have to tell you what’s really going on or why this is really happening. You know. I’ll tell you what I am going to do when covid tests are dropped through my letterbox.

If you feel as strongly as I do, consider doing the same. I choose peaceful civil disobedience over tyranny. I will never take their dangerous experimental drugs and I will not be coerced into testing myself twice a week for a mythical disease.