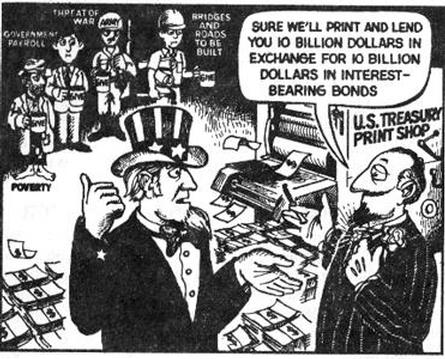 The planet has been hijacked. Our leaders are dupes, opportunists, traitors or all three. Almost everything we know about modern history is a hoax. A stench of moral compromise hangs over our public and cultural life. Anything promoted by the media, education, or government is suspect. This is what happens when we deny Moral Order i.e. God.

“It is absurd to say our country can issue bonds and cannot issue currency. Both are promises to pay, but one fattens the usurer and the other helps the people.”  –Thomas Edison

Not of starvation, disease or war. These are the concerns of children in the Third World.

Bankers are terrified we might object to paying them billions each year in interest for money they create out of nothing, guaranteed by our taxes. (The Federal Reserve Board, a private cartel of mostly foreign banks, finagled this monopoly in 1913.)

The bankers are frightened that, like the homeless man’s dog, we might say, “I can do this myself.”

They are scared the government might go even further and “default” on trillions of make-believe “debt.”

They are frightened of losing “control.” They toss and turn at night.

In order to sleep more soundly, the bankers have taken “steps.”

These precautions help us to understand the world we live in, why it is becoming safer for bankers but less safe and more bizarre for everyone else.

First, people who own money machines tend to have a lot of friends. The bankers helped their friends establish monopolies in oil, chemicals, pharmaceuticals, transportation, media,etc. and took a healthy stake. As you can imagine, these people are thick as thieves. Lawyers, journalists and intellectuals all vie for a piece of the action. (Servicing this cartel of cartels is what passes for “success” these days.)

The bankers’ first precaution is to buy all the politicians. The second is to buy the major media outlets in order to promote the illusion politicians make decisions and represent our interests. The third precaution is to take control of the education system, ensuring that people stop thinking at an early age.

Then the bankers use the government and media to convince us that religion, nationalism and nuclear family are unfashionable, and we want what they want.

We “want” world government (“globalization”). The bankers need to eliminate nation states, freedom and democracy in order to streamline their business and consolidate their power. The UN, the IMF and World Bank, — glorified loan sharks and collectors — will make the laws.

We “want” secularism and the separation of church and state. Even though we were fine with Christianity and Christian values for centuries, the bankers don’t want any authority to challenge their satanic decree.

We “want” diversity. Countries are not allowed to maintain their national identities or traditions. Last Christmas, my provincial Premier tried to rename the Christmas tree at the legislature a “multicultural tree.” Diversity is respecting every culture but our own. Every nation must be heterogeneous as a box of Smarties — no one in a position to challenge the bankers.

Or take “feminism.” Masquerading as equal rights for women, this ideology is designed to spread lesbian dysfunction. If women focus on careers, it means they give less importance to husband and children. They have fewer or no children who will be raised in state day cares.

Under the guise of “womens” and  “gay” rights we are being re engineered to behave like homosexuals, easier to control. Psychological and biological differences between men and women are not “stereotypes.” But signatories to the latest UN “CEDAW” Convention ( passed by the US Senate Foreign Relations Committee) will be required to “take all appropriate measures to modify all social and cultural patterns of conduct of men and women.” (Article 5)

This kind of Communist-inspired social engineering is simply persecution of heterosexuals. It is intended to arrest our natural development: the birth rate has halved while the divorce rate has doubled. An army of highly paid lawyers, social workers and bureaucrats treat the casualties. These self-serving do-gooders are the bankers’ biggest constituency.

People –stunted, love-starved, sex-obsessed — without family, religious or national identity, are easy to control. (They’ll join anything; they’re looking for a family.) But in case of resistance, the bankers have created a bogeyman, “terrorism” to justify a huge security apparatus.

The Office of Homeland Security is designed to control us — the domestic population. Why would this be necessary? We’re “in debt” trillions of dollars and the bankers intend that we pay. One day they will take away our toys. In case that’s a problem, an Orwellian police state will be in place. But first,the Muslims must be subjugated and robbed.

Talking about the United States as if it were an independent country is silly. American politicians pawned U.S. sovereignty in 1913. Ever since, U.S. soldiers have been bullyboys for international bankers, and nothing else.

The American taxpayer and soldier made the First World War possible. It started just six months after the establishment of the “Fed”. Its purpose was to increase debt, cripple the great European nation states, slaughter a generation, and establish two of the bankers’ pet projects: Communism (Russia) and Zionism (Palestine.) After the war ended, banker world government — The League of Nations (a.k.a., “The League to Enforce Peace”) was established.

The US didn’t enter the Second World War in Dec. 1941 to save Western Civilization. England had stood alone against Germany for more than two years. The U.S. entered the war just six months after Hitler attacked Russia. The purpose was to save Communism! [I am indebted to A.K. Chesterton (“The New Unhappy Lords,” 1969) for this insight] For the same reason, the USSR got $5 billion in U.S. lend-lease after the war ended.

After the smoke cleared, Communists instead of Nazis tyrannized Eastern Europe. Soviet agents/ US diplomats Alger Hiss and Harry Hopkins established the United Nations on land donated by John D. Rockefeller. One of the UN’s first acts was to create the State of Israel.

Ben Hecht (in A Child of the Century) wrote “the Twentieth Century was cut off at its knees by World War One.” Before committing suicide in 1942, Stefan Zweig (The World of Yesterday) spoke in the same tones about the demise of Western Civilization.

The planet has been hijacked. Our leaders are dupes, opportunists, traitors or all three. Almost everything we know about modern history is a hoax. A stench of moral compromise hangs over our public and cultural life. Anything promoted by the media, education, or government is suspect. This is what happens when we deny Moral Order i.e. God.

This is what our children will inherit, a world that is safe … for international bankers.

One Response to “Making the World Safe….for Bankers”