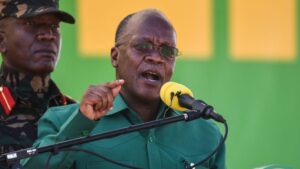 He may have been ridiculed in the West for rejecting lockdowns and encouraging prayer-a-thons. But as ex-World Health Organization scientist Dr David Bell explains, Tanzania’s late president John Magufuli is not seen as a pariah by many in the scientific community – he’s seen as a life-saver.

If you read the BBC website, you probably think Tanzania’s late president was either a rebel, a ‘Covid denier’ or just plain stupid.

In reality, he was none of these.

President Magufuli was actually a highly educated scientist with a PhD in chemistry, who probably saved thousands of lives by refusing to embrace lockdowns and other knee-jerk reactions foisted on the people in much of Africa and the West.

Magufuli’s decision not to lock down was consistent with the evidence-based pandemic guidelines released by the World Health Organization (WHO) in 2019.

He rightly predicted that Covid-19 mortality in Africa would be very low compared to other major killers like malaria, tuberculous (TB) and HIV-Aids, and followed good public health principles in prioritising these higher burden diseases that particularly afflict the young, while telling Tanzanians not to panic.

He also prioritised keeping the economy growing, which is in the long term the most effective way of improving life-expectancy and health. In short, he acted as you would expect a well-trained scientist and rational public health expert to act in the Tanzanian context.

Throughout the Covid-19 pandemic, the media has demanded longer and harder lockdowns, as if they were normal – or helpful.

But they rarely point out that no pandemic plan recommended mass business closures and restrictions on religious freedom, travel, or normal societal function before 2020, because removing these is expected to cause greater harm, and impinges greatly on fundamental human rights.

We never implemented any of these measures during the SARS, MERS or swine flu outbreaks of recent years. People attended places of worship, caught packed buses and trains, the young went clubbing and danced and sang and kissed.

The same was true for Tanzanians during this pandemic too.

Most Tanzanians are young and not obese, and so are at very low risk from Covid-19.

President Magufuli received a lot of bad press for telling his countrymen to go to church at the start of the pandemic to ‘pray’ Covid away.

But mass gatherings would not be expected to put the vast majority of the Tanzanian population at significant risk.

Tens of thousands of sports fans went to stadiums in Florida and Texas recently, and there was no noted uptick in cases afterwards.

Of course, protecting the vulnerable from harm is important in any epidemic, and it’s difficult to say whether the mass prayer-a-thons were a good idea from a purely transmission standpoint, as they may have increased risk to older people early on in Tanzania’s outbreak.

Building so-called ‘herd immunity’ in young people rapidly through such gatherings would however be expected to exert a protective effect, if the vulnerable are well protected until such transmission-suppressing immunity is achieved.

The policy overall was probably far better for public health than strict lockdowns, which led to the first recessions in a quarter of a century in many African countries, as well as a reduction in treatment for major killers like malaria, tuberculous (TB) and HIV-Aids.

The virus that leads to Covid-19, SARS-CoV-2, is likely to become endemic, and as herd immunity is reached through natural infection or through vaccination, severe disease and death will become increasingly uncommon.

Therefore, one would expect Tanzania, like Sweden, Croatia, Belarus and other ‘non-lockdown’ countries, to have similar overall Covid-19 deaths and epidemic trajectories as comparable lockdown countries in the end.

The vehement criticism of President Magufuli in the media is therefore disappointing and highly ignorant. It does appear that Western journalists find it easier to smear leaders in African countries than European leaders. Sweden’s leaders, for instance, have never been labelled ‘Covid deniers’.

This is not new, but perhaps shows how much hypocrisy and prejudice persist in Western society.

Tanzania appears to have done better from a health point of view than most other low-income countries through this last year. While millions of Africans have been thrown into hunger and poverty, Tanzania has seen GDP rise throughout 2020.

Falls in GDP and general impoverishment are associated with increases in all-cause mortality.

This is particularly the case in sub-Saharan Africa, where food security is often a real problem and control of endemic diseases such as malaria, tuberculosis and HIV-Aids is fragile.

It is therefore highly likely that, in maintaining a well-functioning economy, he and his government were responsible for greatly reducing mortality. UNICEF estimate almost a quarter of a million additional child deaths in South Asia in 2020 due to the responses to Covid-19 there.

It is likely that similar tolls will be seen in sub-Saharan Africa but we would expect that Tanzania will now be relatively protected from this.

Let us hope, for Tanzanians’ sake, that this continues with his successor.

Western media may have had a good laugh at President Magufuli – and Tanzanians in general – for thinking they could ‘pray’ away a virus.

But, rhetoric aside, by refusing to lockdown, and by refusing to divert health resources away from malaria and TB to test people with no symptoms for a virus with a very low fatality rate, Magufuli was following an orthodox pandemic response.

He was also orthodox in his approach to human rights. Religious freedom was considered an important human right by most Western journalists only 18 months ago, and fear should not change fundamental human rights.

Honest journalists should acknowledge the benefits of Magufuli’s approach, however much it may contradict their current preferred world view.

Ridiculing religious observances that fall outside their experience, and denigrating public health science that they clearly don’t understand, is not good journalism.

It just highlights how ignorant they are.