The shot is not about simply getting a vaccine into your arm. Ultimately, it’s about getting you tied into the digital system being launched in the form of vaccine passports. As explained by former Clinton adviser and author Naomi Wolf (whom I will be interviewing shortly) in a March 28, 2021, interview with Fox News’ Steve Hilton:21,22

Once this rolls out, you don’t have a choice about being part of the system. What people have to understand is that any other functionality can be loaded onto that platform with no problem at all. It can be merged with your Paypal account, with your digital currency. Microsoft is already talking about merging it with payment plans.

Wolf also points out the horrific history of IBM, which developed a sophisticated system of punch cards that allowed Nazi Germany to create a two-tier society and ultimately facilitated the rounding up of Jews for extermination. Fast-forward to today, and IBM is now a leader in the vaccine passport business. I wrote about this in “IBM Colluded With Hitler, Now Makes Vaccine Passports.”

In Nazi Germany, the obsession with purity — both in terms of hygiene and race theory — drove the genocide of Jews, the old, the handicapped and the mentally challenged. 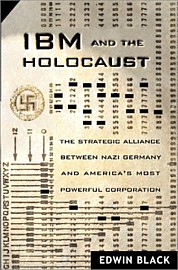 In present day, the public narrative has eerily followed Nazi Germany’s playbook for genocide, starting with the scapegoating of healthy people, as the rapid spread of COVID-19 was blamed on asymptomatic individuals not properly masking, social distancing and self-isolating.

That then grew into the nurturing of prejudice against people who refuse to wear masks, and now we’re seeing the narrative building toward persecution of those who do not want to get the vaccine. It will start with discrimination, and already, we’re hearing talk of how only vaccinated people ought to have the right to partake in certain social activities. If that is tolerated, then outright persecution will be the inevitable next step.

This is why I reject and counter commentaries such as that by Dovere. These half-baked, one-sided, persecutory arguments must be challenged at every turn, because they only lead us one way. And unless you’re part of the technocratic elite, you — regardless of how you feel about vaccination right now — do not want to end up there.