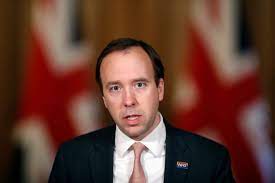 The MHRA have finally admitted that the AstraZeneca vaccine is to blame for the reported cases of rare blood clots associated with low levels of platelets, but have only ‘advised’ that people aged between 18 to 29 are offered a different vaccine, and Matt Hancock has had the cheek to say the jab is “perfectly safe”.

The AstraZeneca viral vector vaccine is so safe that up to the 31st March 2021, there have been 79 reports to the MHRA Yellow Card scheme of specific type of blood clot in the brain, known as cerebral venous sinus thrombosis (CVST) occurring together with low levels of platelets (thrombocytopenia) due to the jab.

Meanwhile Matt Hancock has been on the mainstream media 24/7 repeatedly insisting that the AstraZeneca jab is still safe, and those that have had their first dose should definitely go and have their second. Why? Because the Health Secretary has said there is “no evidence” of rare blood clots after the second dose of the vaccine.

There is no evidence because they’ve barely got going with the second doses of the AstraZeneca vaccine, the bulk of the second doses so far have been the Pfizer / BioNTech mRNA jab. Is this guy for real?

This is the MHRA summary released earlier today –

‘The MHRA has undertaken a thorough review into UK reports of an extremely rare and unlikely to occur specific type of blood clot in the brain, known as cerebral venous sinus thrombosis (CVST) occurring together with low levels of platelets (thrombocytopenia) following vaccination with the COVID-19 Vaccine AstraZeneca. It is also considering other blood clotting cases (thromboembolic events) alongside low platelet levels.

These reports have been analysed by the Government’s independent advisory body, the Commission on Human Medicines (CHM) and its COVID-19 Vaccines Benefit Risk Expert Working Group, which includes lay representatives and advice from leading haematologists.

Up to and including 31 March 2021, the MHRA had received 79 UK reports of blood clotting cases alongside low levels of platelets following the use of the COVID-19 Vaccine AstraZeneca:

As a precaution, administration of COVID-19 Vaccine AstraZeneca in people of any age who are at higher risk of blood clots because of their medical condition should be considered only if benefits from the protection from COVID-19 infection outweighs potential risks.

We’re sorry but this is a disgrace. To try to play down the severity of this and only advise that under 30’s be offered the choice of having a different vaccine is disgusting. Matt Hancock can say what he wants, but the evidence is there in black and white that the AstraZeneca jab is causing some extremely serious averse reactions (see our previous report).

The troubling thing about this is around only 1% of adverse reactions are actually reported to the MHRA Yellow Card scheme, with many people not even knowing of its existence. So how many more cases have actually occurred? We’ll never know because the authorities and the mainstream media will remain silent.