The mainstream media barely reported on the huge Unite for Freedom protest in London this weekend. And what they did report was largely completely untrue.

Here’s a quick debunking of the main lies the MSM are telling.

The scant few news stories offering coverage of the protests are are agreed on one point: there were not many people there. “A few thousand”, some sources say, or “five to ten thousand” for others.

10,000 seems be the absolute ceiling, and that’s what Reuters, the Guardian and others settled on.

All the visual evidence suggests that’s a massive – massive – underestimate.

Look at this drone footage:

Or this video of Oxford Street:

Or this time-lapse of protesters marching toward Trafalgar Square:

Clearly the numbers are much bigger than being reported. With people present reporting anything from 100,000 up to 1 million.

CLAIM 2: “THEY WERE VIOLENT”

Although the vast majority of the protests were entirely peaceful, and the organisers were keen to keep the tone positive, non-combative and inclusive: 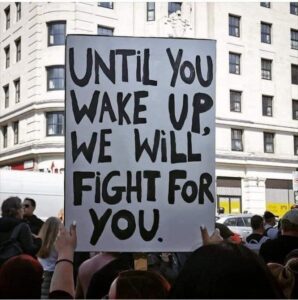 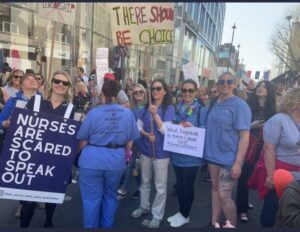 There was one scuffle with police in Hyde Park, late in the day. Many outlets jumped on the chance to portray the protesters as violent thugs, reporting “8 police injured in clashes with anti-lockdown protesters” or something similar. The Guardian quotes the “angry” head of the Met police, without quoting a single non-police witness.

One witness, That Nurse Who Asks Questions on Instagram, reported it was the police who started the violence:

If you don’t believe her, then take the word of one of the police officers involved that it was a “minority” who “spoiled the day” and didn’t “reflect on the majority of the group, or their cause”:

Then compare and contrast this to the coverage of the “Kill the Bill” protests, that actress being arrested last month, or the “fiery, but mostly peaceful” BLM protests last summer.

CLAIM 3: “THEY WERE RACIST”

This is more an implication than a direct lie, but it’s out there. Some protesters were wearing yellow stars, similar to ones Jews were made to wear in Nazi Germany: 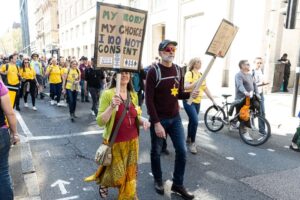 The Mirror (and some others) jumped on this fact to attempt to paint the protests as somehow anti-semitic.

Of course, that’s nonsense. They were making an argument about the dangers of segregation, and those choosing to take umbridge or be offended by it are using dishonest tactics to get around dealing with the comparison.

CLAIM 4: “THEY WERE WASTING THEIR TIME”

The general vibe of the media coverage has been eye-rolling. Like this piece in the Evening Standard, for example, which quotes several people saying “why are they protesting, lockdowns are over”. This Guardian piece says the same thing.

You can find the same sentiment all over, attempting to argue that protesting lockdowns now we’re opening back up is a silly waste of time.

This argument is seriously flawed in three key ways:

This is good exemplar to use when discussing how the media covers protests. At least, protests which don’t have Deep State backing. It’s a simple checklist:

It’s funny, the first story I ever wrote for OffGuardian, a lifetime ago, was about how the BBC had literally not said a single word about a protest march of 50,000 people walking past their own offices…until two days later, when they lied about the numbers.

Debunking MSM lies about the Unite for Freedom protests