If you want to actually learn things, you are going to have to find some other ways to do it. I would suggest a library pass, an Ebay account, and an Abebooks account. You need some old books, written before the modern age.

Rutgers and Cornell, as well as several other universities, have now stated they will require vaccines for enrollment in the fall. In response, I am calling for students at those universities to unenroll and demand a full refund. That also goes for any colleges, universities, or other schools requiring vaccination that may join that list between now and August. It also goes for any public or private schools at any level.

I remind students and their parents that they are the customers here, and the customer is always right. You are the ones paying big money for an education. You are not paying to be treated like the subjects of a dictatorship. Beyond that, you are not guinea pigs for dangerous experimental gene therapy masquerading as a vaccine. These universities, like the state and local governments, have simply caved or been bought out by Big Pharma, Bill Gates, and the other criminal billionaires and trillionaires running this country. Any college or university that has caved to these people can’t possibly give you a decent education, so you better figure that out now. These institutions only exist to shovel propaganda down your throat on a wide variety of issues, including science, the arts, politics, medicine, and anything else they are involved in. That has been true for a long time, but it is now so obvious everyone should be getting it.

So if you want to actually learn things, you are going to have to find some other ways to do it. I would suggest a library pass, an Ebay account, and an Abebooks account. You need some old books, written before the modern age. 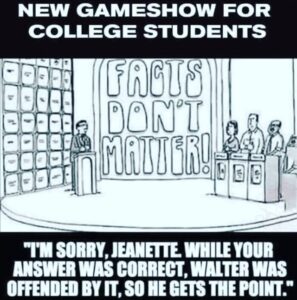 You will say you need a degree to get that job you want. But that job is hardly worth dying over or getting some chronic illness over, is it? If your immune system crashes, you won’t be able to hold down any job, not even one at Walmart. You will be bedridden the rest of your short life, wishing you had listened to me. But hopefully it won’t come to that. I seriously doubt that every university in the country will require vaccines. Choose one that doesn’t. Or take a year off. This will probably blow over by then, and these places like Rutgers and Cornell will realize what a mistake they made. When half their students unenroll or die, maybe they will get the ******* message.

And if you have younger kids in public schools, the same thing applies. Do not allow your kids to be vaccinated or to wear masks all day under any circumstances.

Now is the time to start that homeschooling program you have been thinking about. Join with your neighbors and hire a teacher. If your state doesn’t allow it, move. If things get really hopeless and you are worried about the state stealing your children, take the year off and travel with the whole family. Live in a camper and keep moving if you have to. Again, even Bill Gates is admitting this thing will probably die out in another year, so you will probably only have to flee vaccinations that long.

I don’t think the vaccine passport will fly, but if it does it will be easy to walk around. You won’t get to go to concerts or ballgames, big deal. I don’t go to them as it is, so no loss. You won’t get to fly. Fine, bankrupt the airlines as well. Tell Coca-Cola, Delta, United, Major League Baseball and all these other companies to bite you. You don’t need them. You are better off without them. I haven’t had a soda in 30 years, and don’t miss them. I’m almost 58 and my teeth and gums are in great shape. That’s the main reason why.

Which is all to say that if corporate America wants to play hard ball, tell them to bring it on.

It is time we divested from about 3/4s of this shit anyway, so now is a good time to get started.

4 Responses to “Boycott the Universities!”