The quarantine isn’t being extended because of the virus.

It’s being extended to destroy the income of as many small family-owned businesses as possible.

That’s why small family restaurants on the continent of Europe are forced to close whilst burger chains have business as usual.

The ’emergency rescue’ financial package promised by the prime minister is hogwash.

NHS staff complained they haven’t even got protective masks… They didn’t need any – most UK hospitals were empty for most of 2020!

This, ladies and gentlemen, is what you call a POKER DOUBLE BLUFF.

QED: How long can the illuminati hold the quarantine before a critical mass of people AWAKEN and realise that it benefits the DEEP STATE?

Billions of dollars have already been made by the Elite in the first wave of stock market and currency crashes.

They engineered the crash, bought the stock and are now twisting the knife in the wounds inflicted on small businesses.

Look around you and THINK.

How can it be logical for STREET MARKETS to be banned, but SUPERMARKETS owned by the Elite still to be open?

It investigates the NAZI-style stringent laws which were suddenly introduced by many governments around the world – and these laws were introduced even though major health institutes had already declared that COVID19 was NOT, repeat NOT, a major pandemic!

MESSAGE FROM THE AUTHOR, CHRIS EVERARD:

“DARK PLANET is the sequel to my book DEEP STATE – and it shows that Bio/Chemical Weapons have been engineered in labs by NAZIS – and that the children and grand-children of many Nazis are now prominent politicians.

I take you deep behind the scenes of the TAX HAVEN ‘Foundations’ which have been developing GENE DRIVES – which are a dangerous new technology partly funded by BILL GATES and JEFFREY EPSTEIN”.

GET ALL OF CHRIS EVERARD’S BOOKS FROM HIS GUMROAD BOOKSTORE: 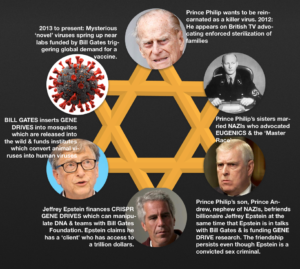