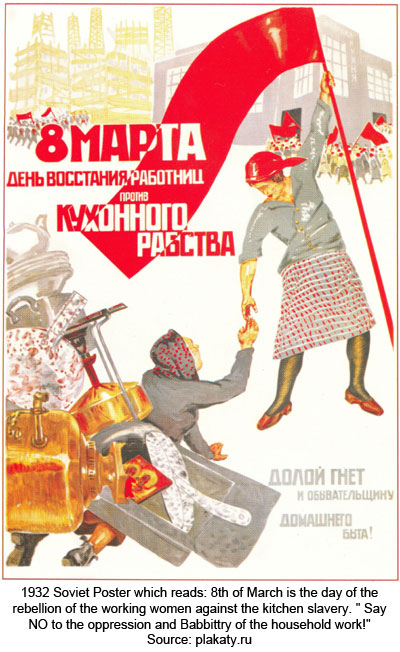 March 8, International Womyn’s Day, originated in the USSR. From Wikipedia:  “Following the October Revolution in 1917, the Bolshevik Alexandra Kollontai persuaded Vladimir Lenin to make [March 8th, International Women’s Day] an official holiday in the Soviet Union….Kollontai believed that, like the state, the family unit would wither away once the second stage of communism became a reality. She viewed marriage and traditional families as legacies of the oppressive, property-rights-based, egoist past.”
This proves that Communism is a fait accompli in the West. By controlling credit, the Illuminati (Cabalist) Jewish central bankers also control business, government, culture and media. The satanist goal is the destruction of Christian Western civilization and the enslavement/dispossession of mankind.
The Illuminati subject us to the same social engineering as the USSR. We have de facto Communism and don’t even know it.  Take a look at the corporate sponsors.  The central bankers only need to own 3-5% of the stock to control a corporation.

Feminism is designed to undermine Western society by breaking up the family. Similarly, diversity, migration, miscegenation, pornography and gender dysphoria are designed to destroy the West The goyim are oblivious to this relentless occult attack because the MSM portrays it as “progressive” instead of “suicidal.” Maybe when they lose their toys, the goyim will take notice. Related – What is Communism?
———-Betty Friedan- Mommie Was a Commie
———-How the US Communist Party Created Feminism
——— Gloria Steinem – How the CIA Used Feminism to Destabilize Society

(re-posted every year since 2009) International Women’s Day  ( March 8) is a longtime Communist propaganda tool. What does it say when an official Soviet holiday is enshrined in our mainstream culture? Clearly, Communism isn’t dead; it has just morphed into other forms like Feminism.

It confirms Norman Dodd’s famous claim that Ford Foundation President Rowan Gaither told him, in 1954,  that the agenda was to “socially engineer” US life so that “that it can be comfortably merged with the Soviet Union” as part of banker-controlled world government.

Every year the supposedly capitalist media echo the old Soviet bromides about women’s oppression, and every year I post this rebuttal. 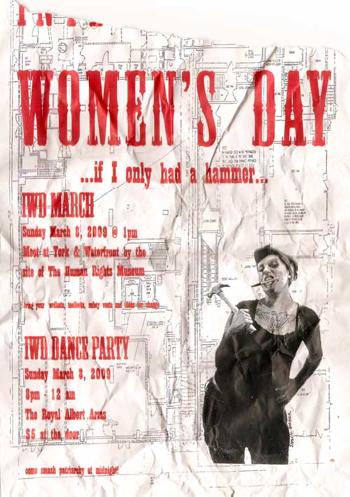 “Women’s Day” pretends to celebrate women but the poster near my Winnipeg home shows an ugly, surly shrew brandishing a hammer. She looks demonically possessed. The caption reads, “if I only had a hammer..”

She’d what? Hit men over the head? Tear down society?  Smash women who want husbands and children?

This isn’t far-fetched. Under the dance notice, the poster actually says: “Come smash patriarchy at midnight!”  She doesn’t look like she has much to fear from a man.

Women participating in the march are asked to bring “your hardhats, tool belts, safety vests and ideas for change.”  Typically Communists celebrate women by redefining them out of existence, as males, i.e. carpenters and pipe fitters.

Through its feminist surrogate, Communists have stripped women of a secure and honored social identity as wives and mothers and made them workers and sexual commodities, hostages to the economy, psyops like the caronahoax and the ravages of age.

Obviously, this day is not about recognizing women for their grace, beauty, charm, and intelligence. It is about cultivating a false sense of grievance and entitlement in order to manipulate them.

They used the same tactic with Jews, Blacks, students and workers and harnessed these groups to their agenda. The ultimate goal is to concentrate all wealth and power in the Illuminati (Masonic) central banking cartel which is colonizing the whole world. The real meaning of “change the world” is the establishment of a totalitarian New World Order.

International Women’s Day is hate against women and society perpetrated by the traitorous banker colonial establishment, which includes most “feminist” politicians, educators and the mass media. Women who participate are dupes and “useful idiots.”

It is a vestige of Communist “popular front” movements first organized in the 1930s to ensnare naive idealistic people using feel-good platitudes like “equality,” “peace” and “human rights.”  These rubes didn’t know that the movements were funded and run by Moscow. The purpose was to alienate the intelligentsia from their own society and make them amenable to the Communist agenda, ultimately “world government.” This seems to have largely succeeded.

Communism is about divide and rule. International Women’s Day began in Copenhagen by “The Socialist International” (i.e. Communists) to promote “women’s rights.” As the poster on the right indicates, it was celebrated in Soviet Russia.

Here is a Manifesto for International Women’s Day published in the German “Die Kommunistin” March 2, 1921:

“To all working women! You who make demands and struggle count in the millions…In all countries where the disinherited surge forward under the sign of Communism against the exploiting and subjugating power of capitalism. On International Women’s Day, mothers filled with pain, housewives bent with worry, exhausted working women, clerical workers, teachers and small property holders flow together.” (Weimar Republic Sourcebook, 1995)

Women’s Day is designed to make women feel oppressed.  For example, a page of gender facts tells them that “women do 2/3 of the world’s work but get only 10% of the world’s income.”  Thus, western women, the most favored generation in history, get a chip on their shoulder vicariously.

Women are brainwashed to think their interests are separate from their own fathers, husbands, brothers and sons.

Thousands of events are planned around the world. For example, at the Unitarian Church in London Ont. an organization for Afghanistan women and girls “will honor and celebrate our local women with music, singing, dancing, and refreshments. All women and girls are welcome. Free event!” Sounds lesbian to me.

In San Francisco, there will be a cocktail party and movie to highlight the plight of the women of Gaza. What about the men and boys of Afghanistan and Gaza? Don’t they count? In the name of equality, these Communist dupes are practising inequality. By breaking up families, they will leave Muslim women and girls more vulnerable than ever.

This timeworn Communist agitprop is proof we live in a closet Communist society. Most people are not socialist, let alone Communist.

As long as a secret Illuminati clique (Communists, Zionists, Freemasons) is allowed to control government credit, subvert nations and plot world government, society is complicit in its own destruction. We will have no one to blame but ourselves.

Related: A Rockefeller Explains they Created Feminism to Destroy the Family

“Our demands are practical conclusions which we have drawn from the burning needs, the shameful humiliation of women, defenseless and without rights. We demonstrate thereby that we recognize these needs, and are sensible of the humiliation of the woman, the privileges of the man. That we hate, yes, hate everything, and will abolish everything which tortures and oppresses the woman worker, the housewife, the peasant woman,  It wins us the confidence of the masses of women who feel themselves exploited, enslaved, suppressed, by the domination of the man, by the power of the employer, by the whole of society.” 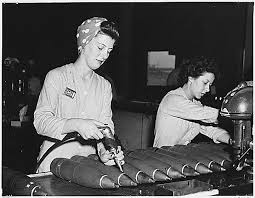 reedom for the woman from the old household drudgery and dependence on man.”)

“Could there be more damning proof of this than the calm acquiescence of men who see how women grow worn out In petty, monotonous household work, their strength and time dissipated and wasted, their minds growing narrow and stale, their hearts beating slowly, their will weakened! The home life of the woman is a daily sacrifice to a thousand unimportant trivialities. ”

“In law, there is naturally complete equality of rights for men and women. And everywhere there is evidence of a sincere wish to put this equality into practice. We are bringing the women into the social economy, into legislation and government. All educational institutions are open to them so that they can increase their professional and social capacities.  That will mean freedom for the woman from the old household drudgery and dependence on man.”