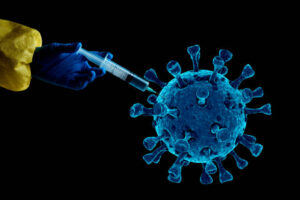 I was a full time media doctor for several decades after I resigned from the NHS on a matter of principle.

I was the doctor on TV AM, the breakfast station, and until I was banned I presented network and regional TV and radio programmes on the BBC and commercial stations. I wrote columns for national newspapers for over thirty years.

I always believed that my first duty was not to the medical profession, the Government, the drug industry or even the company employing me – but to my readers and viewers.

As far as I was concerned, being a media doctor simply meant that I was providing advice wholesale rather than retail.

I always got upset when I saw media doctors promoting propaganda which had originated with the Government or a drug company. All doctors have a duty to question everything they are told by the men and women in grey suits.

The events of the last year have shocked and appalled me. I admire enormously those doctors who have spoken up about the coronavirus hoax and the ensuing frauds. But I have been deeply saddened by the fact that many doctors have supported the official line without ever daring to question what they have been told.

For example, my attention has been drawn to an article in the Daily Mail by someone called Dr Amir Khan, who is described as a GP in Bradford, England. The article is illustrated with a picture of a young man with one of those fancy sticky up hairstyles.

The headline was `I vaccinated 100 people over a 48 hour shift in Bradford. Every single one of them was white.’ Dr Amir Khan delivers a stark illustration of the problems being caused by misinformation on social media.’

Now, we will put aside the idea of a 48 hour shift. I’ve worked 48 hour shifts but I don’t think doctors are allowed to do that these days. And we’ll put aside the thought that vaccinating 100 people in 48 hours would be ridiculously slow since it would mean giving just over two jabs an hour. There are much more important things to deal with here.

`The moment I realised what we were up against was when a student nurse…told me that she wouldn’t have the vaccine because it might prevent her from becoming a mother in the future,’ wrote Dr Khan. `She had been told that the vaccines trigger an immune reaction which could damage the placenta in a pregnant woman – something that was entirely incorrect.’

`I was surprised,’ continued Dr Khan. `I expect this kind of misinformation from patients, not from a fellow medic. I took time to explain the science to her and made her promise two things. First that she would have the jab and second, that she would tell her family, to encourage them to follow her lead.’

Dr Khan goes on to say that a man he knows told him he was too scared to have the vaccine. `We don’t know the long-term consequences,’ he told me.

`I attempted to allay his fears,’ wrote Dr Khan, `saying any side effects of vaccines present themselves earlier, not later, and they are almost always mild.’

Well, I’m sorry, Dr Khan, but perhaps you need to do some more research of your own – rather than merely repeating what you may have been told by the politicians and the drug companies. In my view the sort of reassurance you are sharing with your readers is the sort of reassurance I usually associate with uneducated celebrities. I think you should be ashamed.

There are three points I want to deal with and I’ll deal with them in reverse order.

First, you say that the side effects associated with vaccines are `almost always mild’.

That is not true. Here are some facts you should know.

1. Governments have paid out billions of dollars in compensation to patients who have been severely injured by vaccines – or to the relatives of patients who have been killed by them. Drug companies have been fined billions of dollars for fraudulent activities.
2. Recent papers in medical journals have suggested that vaccines may do more harm than good.
3. The CDC in the US reported early on that the covid-19 vaccines (and I’ll use the word vaccines though you should know that the definition of vaccine has had to be changed to accommodate these new medications) caused a huge variety of dangerous side effects. Indeed, the incidence of death and serious side effects were reported to be over 2.5% . Logically, that means that if you vaccinate 100 people then two and a half of them will die or have notable side effects.
4. Look at my website www.vernoncoleman.com and you will see a long list of some of the people who have died or been seriously injured by the covid-19 vaccines. Everyone thinking of having the vaccine should read it. You can share it from www.vernoncoleman.org I may be old-fashioned but I don’t regard `death’ as a mild side effect. The side effects involved include serious neurological problems, heart attacks, strokes, blindness and many other disorders. I think it is an insult to the patients who have been damaged to describe their side effects as mild. All this is particularly relevant when you remember that covid-19 has a mortality rate which is much the same as that for the ordinary flu. And, as I am sure you know, the WHO said early on that the vaccines don’t stop people getting covid-19 or passing it on.

Second, Dr Khan says that the side effects of vaccines present themselves early rather than later. That’s not true, either, I’m afraid. Side effects can develop long after a vaccination was given, and this is why when vaccines are first introduced it is usual to test them for several years. And the covid-19 vaccines – which he was writing about – are experimental vaccines which are currently still in a trial. The trial will last until 2023. I assume that he is aware of the immune system dangers that many doctors are talking about. It is possible that many patients will fall seriously ill when they come into contact with what is called the `wild’ coronavirus. I don’t know what the risks are. And you don’t know. So providing false reassurance to your patients is irresponsible.

Third, you reassured a young woman that her plans for motherhood would not be damaged by the vaccine. You said that she was incorrect to suggest that the vaccine might damage the placenta of a pregnant woman.

Well, since the operative word there is `might’, I think she was right and you were wrong and I think you owe her an apology.

According to the latest yellow card reports from the MHRA in the UK, a total of 20 women have now had miscarriages and lost their unborn babies after having one of the mRNA vaccines. You might argue that some or all of those women would have lost their babies without the vaccine. But you don’t know that. No one knows. When the vaccines were first introduced, the UK Government said, for example, that the Pfizer vaccine was not recommended during pregnancy and that women of childbearing age should be advised to avoid pregnancy for at least two months after their second dose. The UK Government has, rather inexplicably, recently updated its advice to saying that administration of the vaccine should only be considered when potential benefits outweigh any potential risks for the mother and foetus.

In America, the Vaccine Adverse Event Reporting System had, by the 12th February already received 111 reports of adverse events experienced by women who were pregnant at the time of their Pfizer or Moderna injections. Nearly a third had miscarriages or preterm births. One woman who had a placenta known to be healthy was found, a week after vaccination, to have a placenta which had calcified and aged prematurely. It is true that Dr Anthony Fauci, the Biden Administrations Chief Medical Officer, has said that pregnant women can be vaccinated. It is also true that Dr Anthony Fauci is a director of the National Institute of Allergy and Infectious Diseases which will receive royalties for the Moderna vaccine.

You will know, or should know, that in December 2020, a petition filed with the European Medicines Agency suggested that there is plausible evidence to suggest that the spike proteins in the mRNA vaccines could trigger an immune reaction against syncytin-1, a protein which is responsible for the development of a placenta in mammals and humans.

What you should, perhaps, have said is that you don’t really know what the risks are and that anyone who has the vaccine is taking part in a clinical trial, an experiment, which is still in its early stages.

But that, of course, is not the official government line. And nor is it the line taken by the pharmaceutical industry.

Finally, it is, of course, worth remembering that according to the journal Nature, for every 1,000 people under the age of 50 who are infected with the coronavirus, almost none will die. Indeed, the risk of a young, healthy woman dying of covid-19 is not very different to the risk of her being struck by lightning. I assume that you do not recommend that your young patients carry lighting rods around with them.

In my view, being a media doctor means more than just having a fancy haircut, Dr Khan.

In my view, someone should report Dr Khan to the General Medical Council for spreading what I believe is misinformation. The address of the GMC is easily found on the internet.