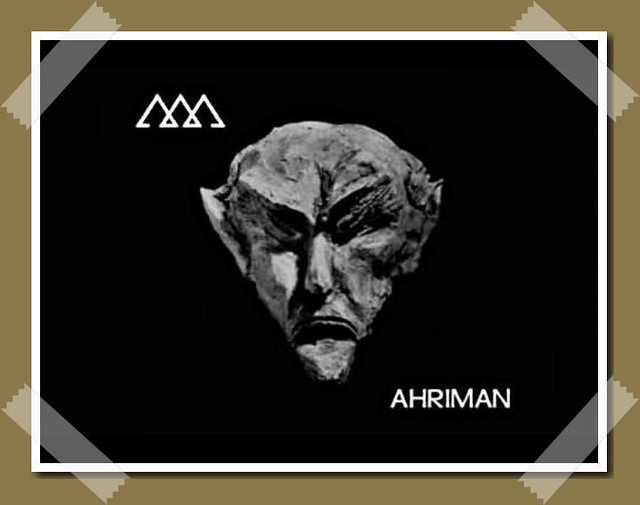 Who would deny that a truly terrible evil has been let loose across the land?

2020 saw the three unparalleled cataclysms devastate the planet as no other year in modern history—THE GREAT SCAMDEMIC, THE GREAT RESET, and THE GREAT STEALECTION.

From the very beginning, it was self-evident that each of these highly organized, manmade catastrophes was meticulously planned and executed with cold and calculating precision.

Many Plandemic deep researchers have even speculated an overwhelming AI entity, known as Autonomous Superintelligence, is really behind the deliberate mass genocide of humanity. See: Welcome to the COVID-19 AI Simulation! Brought to you by your AI ‘friends’ at DARPA.

The critical point is that whoever, whatever, is the driving force behind these immense global criminal conspiracies, it quite obviously exerts complete command and control over the entire world community of nations.

In other words, the only way that THE GREAT SCAMDEMIC, THE GREAT RESET, THE GREAT STEALECTION—as extraordinarily reckless and brazen and desperate as each of them was and still is, the countless co-conspirators would only have undertaken them if they were fully supported by a highly hidden power that [temporarily] controls the destiny of the human race.

Who or what is the prime mover behind the free-fall collapse of nations and societies everywhere?

Clearly, this utterly demonic force is not human; clearly it is an off-planet entity that controls by remote its many minions who are totally subservient to its nakedly satanic agenda.

Evil entities have existed in the world since time immemorial.  Some of them live as EBEs — Extra-Terrestrial Biological Entities — in other realms or planes of existence.

One such leader of the forces of darkness was identified by the great Austrian philosopher, social reformer, esotericist, clairvoyant Rudolph Steiner.  Steiner contemplated the nature of evil in the world long and hard over the course of his lifetime.  Because of his exceedingly enlightened work, he often confronted the raw power and influence of a dominant evil entity he called Ahriman, also known as Lucifer.

AHRIMAN: The Root of All Evil on Planet Earth

The preceding exposé is a MUST READ for any individual who wants to correctly comprehend both that malevolent entity and its MO, which is behind the ongoing destruction of the biosphere and mass murder of humankind.

Once this vital knowledge of the existence of a diabolical prime mover who sits at the very pinnacle of the peak of the world power structure pyramid, it’s much easier to understand how whole nations can be moved to lock down without legitimate cause or administer deadly Covid injections despite scientific evidence of their lethality. 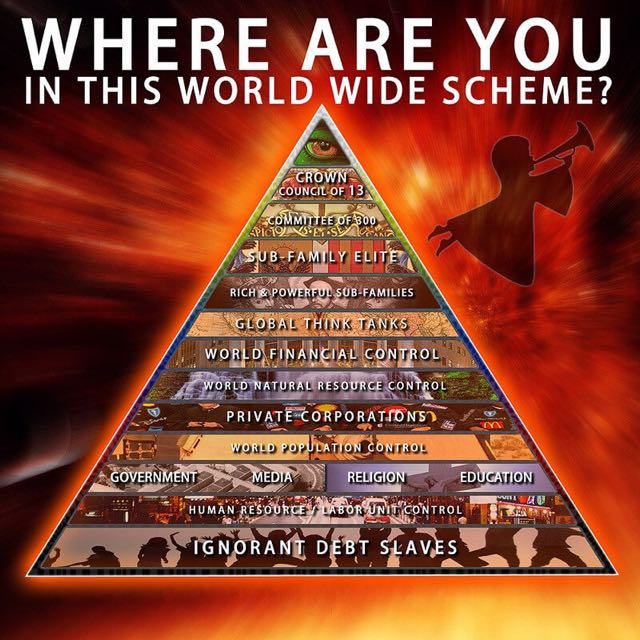 The real power structure on Earth is much too concealed to properly delineate here.  However, the overt power structure, that has been presented by conspiracy realists over several decades, clearly reflects the clandestine architecture of the Global Control Matrix (GCM).

Corporate America or the Fortune 1000 companies provide a perfect starting point for teasing out the way in which so many corporations and other prominent organizations march in LOCKSTEP with orders delivered from the top of the GCM.

All Ahriman has to do is strategically position loyal mercenaries in every corporation that matters to carry out his nefarious New World Order agenda.  Whether that highly compromised human being is placed as the CEO, COO or CFO in the company, once they are firmly situated they can rule with an IRON FIST as though they were Ahriman itself.

So, for example, as long as the CEO or President or Chairman of the Board or all 3 of these positions at Amazon.com are occupied by Ahriman zealots, the entire corporate entity can easily be controlled to carry out the NWO globalist agenda.

In other words, the 1,298,000 employees of Amazon as of December of 2020 must march in lockstep with the dictates of the corporate officers issued from headquarters in Seattle, Washington.  Failure to do so by any worker always occurs on pain of immediate dismissal, forced retirement, false prosecution for real or falsified criminal activity, or much worse.

Pretty simple, yes?  An entire corporation or government department or NGO can be completely controlled from the top down in this totalitarian manner.

The Government-Corporate Complex Takes
Complete Control Of The USA

Of course, there are also the numerous interlocking directorships between virtually all Fortune 5000 companies, especially within the Military-Industrial Complex.  That reality makes it even easier to control all of Corporate America.  The Company, also known as the C.I.A., has the primary responsibility of keeping all of those corporate entities in check and on the same page of music 24/7.

Let’s not forget the multi-century power centers of the Vatican, the Sanhedrin and the Caliphate in Mecca.  For they control the religious life and spiritual pursuits of billions of adherents around the world and can also be taken over in many ways to do the iniquitous work of Ahriman.

KEY POINTS: The Central Banking Cartel and International Banking Crime Syndicate are but funding and financing entities that are responsible for the financial backing of so many dangerous endeavors and destructive projects the world over.  That means the Rothschilds and Rockefellers, Morgans and Mellons, Gianninis and Schiffs were relatively low on the totem pole.  And Soros is but a two-bit bagman.

Then there are the myriad secret societies that have existed from time immemorial, most of them created by the dark side.

It’s of paramount importance to be aware that many secret societies were created by forces for good, but they were ultimately taken over by their ill-intentioned enemies.

The essential point here is that the vast majority of today’s secret societies work feverishly for the dark side.

Whether it is the Committee of 300, the Bilderbergers, or one of thousands of Freemasonry Lodges scatters across the planet, they are all beholden to Ahriman.

Likewise, the more public Council on Foreign Relations or Royal Institute of International Affairs, Chatham House in London or Skull and Bones at Yale, the Society of Jesus or Opus Dei, Knights of Malta or Knights of Columbus, are each dominated by dark souls whose only mission is to serve the NWO globalist goals of Ahriman.

There are also the numerous much more furtive secret societies whose stealthy members have infiltrated every powerful organization on Earth.  Ordo Templi Orientis and Knights of Maccabees, Bohemian Club and The Black Hand, Council of Rome and Council of 30 are just a few that have been forever influencing the affairs of men in extremely negative ways.

Lastly, there are the most feared groups of Ahriman fanatics who are trained from childhood to carry out the most odious agendas in the world.  These include the Illuminati Families, Black Nobility, Khazarian Mafia, British Crown, the Bavarian Thule Society, among many more.  These exceptionally sinister and malicious and murderous organizations have been in the direct employ of Ahriman over many centuries.

KEY POINT: There are other ultra-secret societies which have been marching to the orders of Ahriman over millennia since the very beginning of the present 5125 year age.  Most of these have never even been named because of how concealed their members and surreptitious their movements are.

Given this stark reality concerning the Global Control Matrix and World Shadow Government, pulling off the GREAT RESET or THE GREAT SCAMDEMIC is easy as pie.

However, Ahriman is a wicked entity that is continually blinded by intense arrogance and profound ignorance.  Hence, it makes a LOT of bad decisions and then tries to clean up each and every mess by dint of force or sheer overwhelm, which it can do on demand.

Therefore, the whole world has turned into an unprecedented mess (and unadulterated disaster area) of truly epic proportions.  This pivotal point in human history actually represents a very rare inflection point.  Once this civilization turns the corner toward the light and rejects the descending darkness all around, the way forward will be made clear.

But first every resident on this blue orb must apprehend the pervading current reality due to the vile workings of Ahriman as follows: Ahriman: Occult Annihilation of the Soul.

KEY POINT: More to the crucial point for souls who have already been captured or who are vulnerable to being held hostage (e.g. by their smartphone), interaction with all Internet technology must be conducted in the right way; otherwise, it will be done in a negative way.  This is Ahriman’s primary way to annihilate the human soul.  It’s also why Internet-based pornography is the most viewed content on the World Wide Web today.  Think about it, if the shoe fits.

Lastly, what we are all witnessing and/or experiencing is the final battle of the final war between the forces of light and the forces of darkness for this particular race of humanity.

Look around and see the raw power and eery pervasiveness of Cultural Marxism worldwide.  It’s as thought the entire planetary civilization is undergoing a full-blown Cultural Revolution Red China-style.

This intentional collapse of society must be arrested post-haste before the we collectively pass the proverbial point of no return.  The more folks who comprehend the following essay, the quicker we can unify and reverse course BEFORE IT’S TOO LATE!

The Spiritual Battle Between Humans and Machine

FINAL POINT: Ahriman is just one name that many have given, down through history, to the Big Enchilada which oversees the meetings of the grand poobahs who run this planet.  Ahriman is also known as the Prince of Darkness, Satan, Lucifer, the Antichrist, the Beast, Father of Lies, Mephistopheles, Angel of Darkness, King of Hell, Beelzebub, etc.

Nothing happens in the earthly realm outside of the universal laws of agency and cosmic paradigm of hierarchies.  Just as a government has it’s president or prime minister, congress or parliament, supreme court or high court, so, too, do organizational structures and hierarchies exist in both the heavenly and infernal realms.  During this final “Age of Conflict”, Earth basically becomes a prison planet of sorts where every inhabitant is dealt their karmas, especially very difficult trials and tribulations marked by great pain and suffering.  The demoniacal agents, who ensure that we go through these adversities, all work for the dark side.  Just as God directs the light, Ahriman or Satan rules the forces of darkness.  Similarly, there are many levels of agency between Ahriman at the top and his multitude of devils below.

Exactly WHO or WHAT is behind the wholesale destruction of the entire planetary civilization?