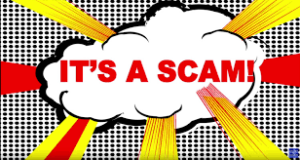 So many of us have said, in increasingly exasperated and occasionally expletive-ridden tones (yes… even me…), “why can’t people see what’s happening, it’s SO obvious!”.

It’s obvious once you see it. When you don’t (to state the obvious…), it’s not, and that’s why so many people fall for your more “conventional” scams, even when everyone around them is screaming, “hello?! Can’t you see you’re being taken for an absolute ride?!”.

The “beautiful stranger on the internet who can never get their camera to work” scam is so common, it has spawned a whole new cultural genre, the ‘catfish’ (if you’ve never seen the film of the same name, I can’t recommend it highly enough).

“Catfishing” relationships can go on for months or even years, including the victim sending the catfish money, buying plane tickets to meet, and even accepting proposals of marriage – never having seen this person face-to-face, or even heard their voice. The duped victim almost invariably has friends and family urgently warning them this person is deceiving them, but they cannot and will not see it.

The same is true for the insurance scams, the pension scams, the Nigerian Prince scams – whether someone is seeking your attention, your love, your money, or all three, great feats of deception to manipulate other people are not uncommon, and millions of people every year – including perfectly intelligent and sane people – fall for them.

It’s because healthy human beings have an inbuilt hardwiring to trust and feel empathy towards others. In short, we are programmed to expect other people to be honest and decent, because we’re honest and decent, and so we simply unconsciously project our own motivations onto others.

Which, in a modern environment run by ruthless intergenerational psychopaths, is one of the most foolish and dangerous mistakes we can make.

Low-level scammers simply after a quick buck operate by gaining people’s trust and exploiting it: that’s why scams are also referred to as confidence tricks (‘cons’). Con artists gain someone’s trust with a number of time-honoured tricks of the trade, and then they seamlessly get what they want, often multiple times. This is because, once that trust is there, it’s very difficult to break, because the victim simply cannot believe that somebody they ‘know’ and have placed faith in could possibly so brutally deceive them – so they will rationalise and justify the behaviour, often allowing themselves to be strung along for months or even years (again, see: Catfish).

We are currently witnessing the exact same phenomenon, but on a mass global scale, and in a situation where the scammers have access to infinite money, unlimited resources, and an enormous catalogue, perfected over many decades, of human psychology expertise.

Just imagine what your average back-alley scammer could achieve with those kinds of tools in their arsenal.

Well, you don’t have to imagine – it’s unfolding in front of you right now.

I mean, just think about it: You know that scammers exist. You know that ruthless people who will say and do anything to get what they want are a reality. You know that people can weave elaborate webs of lies as part of a plot to manipulate and control others. This happens.

So is it really such a leap of logic to believe this is going on on a mass global scale? In short, is it really so implausible to suggest that politicians and their ultra-wealthy sponsors are consummate liars?

All that is happening right now is that the ultra-wealthy con artists who run the world are using your own psychology against you, in exactly the same way the back-alley scammers do. Just on a bigger scale. They gain your confidence by posing as trusted figures (doctors, scientists, ‘experts’). They trigger your empathy by manipulating your emotions (showing stark images of human suffering, and telling you, ‘don’t think about yourself, do it for them!’). They create a sense of urgency with carefully constructed emotive language (“anyone can get it, anyone can spread it!”).

What is cleverer about this scam than the average variety, however, is that scammers are usually after money, even if that isn’t their sole motivation (‘catfishes’ may ask for money, and many do, but the primary motivation of a catfish is usually loneliness – as in our atomised culture, companionship and connection can carry a much higher premium than cash).

Most of us know to suspect something is amiss if we start getting strange and insistent demands for money.

But what if the scammer never asks you for money? What if, like catfish, your money isn’t really what they want? Are you still confident you’d be able to spot a scam then?

The ruling classes don’t want our money. They already have all the money in the world, and if they want more, they just print it.

They want something much more valuable than your money. They want YOU – body, mind, and soul. They want to dramatically reduce the lifespan of your body – which shouldn’t be too hard to believe, given the entirety of the wealthy classes are openly committed to depopulation – and they want to possess and re-programme your mind, in order than you can function to better serve them. Again, shouldn’t be hard to believe, with all the open, mainstream coverage on transhumanism and “upgrading” humans by way of technology. None of this is far-fetched or “conspiracy theory”, it’s all out there in the open (cf. Elon Musk and ‘neuralink’, etc.)..

So, just think, if you were a cabal of ultra-wealthy con artists, hell-bent on dramatically depopulating the world so there are more resources for you and your insatiable friends, and on re-engineering the remaining humans to be more efficient slaves for you, how would you do it?

Would you tell the masses explicitly and clearly exactly what you had planned, knowing they would instantly rebel and resist?

Or would you lie about it? Would you scam them?

The Psychology of the Scam – Why People Fall For It