The Mathis Diana theory was less of a struggle for me Tap.

A few years ago I’d seen detailed work, by a blogger called Chris Spivey, who demonstrated extensive use of photoshop in all the media Paris tunnel photos of the crash scene. He clearly showed that the media aspects of the event were staged so, logically, her death was not proven. Mathis certainly gives plausible reasons for the psyop. His photo analysis also points out this staging in the tunnel although it is far less detailed than Spivey’s was [Sadly Spivey’s site is now defunct. He was memory holed like so many others]

Diana’s death also fell into the same category of blanket media coverage didn’t it, in fact of a whole order of magnitude greater than this Harry/Meghan baloney. It lasted for weeks, months years in Diana’s case. This Harry story is a pale echo in comparison but it has quite a few similarities with the Diana Royal “complaints” story that ran for a few years before her dramatic exit. Seems that they are doing a script re-run of sorts, primarily the so called revelations about the Royals old fashioned social attitudes. The 2 senior Royals are both in their 90’s damn it, what does anyone expect from them? Modern 21st century “woke” nonsense from two nonagenarians? Do me a favour… Even Big Ears is a septuagarian….

As regards covid vaxx morbidity then you final comment sums it up Tap, “…bumping off your granny and grandad”. I just saw this comment elsewhere on the Mathis vaxx paper:
“Just look at the average age of those victims. If true, it seems obvious vaccine jabs are taking care of the elderly population – the same population of our society, that PTB have marked as problematic in terms of population ageing. The same population is targeted by yet another extermination methodology – isolation, loneliness and extreme fear. So what we’re experiencing globally, is population reduction targeted at the elders. The mentioned paper confirms such thesis”
This seems to be the main agenda. All the more reasons for seniors to shun the vaxx and kick back against the “guidelines” which are mainly optional masks included…..just say NO!

The Royal Flap is the ultimate non story. I feel it is covering up a much bigger story or stories. For example, it lends more support to Miles Mathis’ analysis of the fake assassination of Diana.  Read the Miles W Mathis analysis of the famous car crash in Paris. http://www.mileswmathis.com/diana.pdf

This post is about the ‘Royal Flap’.  These paragraphs are extracts from Miles W Mathis’ articles which cover his belief that Diana never died but was conveniently ‘moved on’ by agreement, and the assassination/accident in 1997 was a massive fake.  Here is Mathis’ summary.

As a tack-on, I want to mention the “Royals flap”. I am getting questions in emails about it. According to what we are told, Harry and Meghan have decided to give up their royal income and duties, moving to the US or Canada. One article I read went on and on about what they were going to do for a living, now that they had given up suckling on the British treasury. Since the article admitted they already had about 40 million pounds squirreled away, I had to laugh. They hardly need to worry about money, do they? At my current levels of spending, I could live on that for about. . . oh, 2000 years?

I don’t see any of the Windsors scrambling for rent anytime soon.

My guess is they want to get as far away from the old Queen as they can. She has always been a bear, and people don’t get easier to get along with as they age, even if they aren’t worth trillions. They likely want to get away from Charles as well, who probably treats Harry like yesterday’s garbage—due to the obvious lack of a blood link. The only reason Harry hasn’t been publicly thrown to the wolves as another man’s son is due to the controversy it would create. The royals of the past thrived on controversy but the present ones shy from it. The less attention of that sort the better. In fact, though Harry is claiming he is giving up the inheritance, it is possible he had been denied it, and the current story is only a cover. He has plenty of money from his mother (who is still alive) and the Spencers, so he doesn’t need it. And Meghan is wealthy on her side as well. So my best guess is that the Queen and the other royals are only pretending to be miffed. Most likely they are happy to get rid of him, and it is they who initiated the break.

EXTRACT 1- According to the peculiar mainstream timeline, Diana allegedly
moved from Khan to Fayed in the same month. More indication of a fake. You don’t get over “Mr.
Wonderful” that fast. Which indicates Diana was probably still with Khan after the faked death, having
never split from him. So that is probably where we can place her in late 1997. Khan was living in
London at the time (working at London Chest Hospital), so it would appear that Diana never left
London— or didn’t go far. I am not saying she is still with him, since he remarried in 2006. But my
guess is that is where she was in late 1997. When they split and where she is now is anyone’s guess……

EXTRACT 2 – Let us return to Rees-Jones. His injuries also don’t match the story. We are told his face was
crushed, requiring total reconstruction using old photos as reference. 150 pieces of titanium were used
to hold the bones together. Nonetheless, his face never looked that bad, and was “nearly back to
normal with a year”. Really? Does this look like someone who has had his face completely rebuilt
from photos?

Not to me. Here is what he looked like in his 20s:

Amazing that his face was crushed but his nose suffered no damage at all. His mouth suffered no
damage at all. His jaw was supposed to have required major reconstruction, but we see no sign of
damage. The only damage is slight, to his left eye. That could have been acquired before the crash,
during his time in the army. 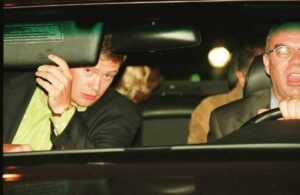 Also curious that we have pictures of the passengers just before the crash:
But that’s just a continuation of the joke. The driver is making faces, and neither Diana nor Dodi can
be identified in any of them. Do you really think that was taken by paparazzi driving in front of them?
I say it is staged. Why? One, because I have never seen a windshield that clean. It is being shot
through by a bright flash, but we see not one speck of dust, not one bug splat, not one streak. Also,
look at the hood. The car is supposed to be a black Mercedes. It looks brownish to me. Here is one
from the same staged photo set:

EXTRACT 3 I found that at National Enquirer, sold as pictures just before the crash. Henri Paul, the driver, is
wearing the same clothes and the same glasses, and that is supposed to be Diana in the back. But
again, does that car look black to you? And look closely at Diana. What is blocking the view of her
face? It isn’t the rearview mirror or the seat. It looks like she is wearing a half-helmet. Why?
Also note that Rees-Jones makes sure to turn his head away to his left in every single photo in the set.
Why? Because that hides the fact that he already has a scar over there.

Advance the clock 24 years and what could be more natural than Harry wanting his children to be near his mother’s home?  Harry and Megan have moved to Bel Air and that must be where Diana now is – or at least nearby.

Run a long saga about Meghan being a bit bossy with the staff or whatever, but obviously the Diana fake death cannot be reversed, and the separation of his parents is a real factor is Harry’s choices.  His real father is James Hewitt, of course.  Maybe he’s in Los Angeles as well, and not dead as reported.

Harry wanting to live near his mother in LA (Belair) would clearly need a big cover story.  The timing of all the brouhaha is another thing.  Why is it hitting the worldwide headlines now when the world is engaged in a massive vaccine rollout?  The subject of the vaccine rollout I deal with in my other post on January 11th 2021 and why the vaccine launched on that date in the UK, and also the cover-up of the numbers of vaccine deaths.