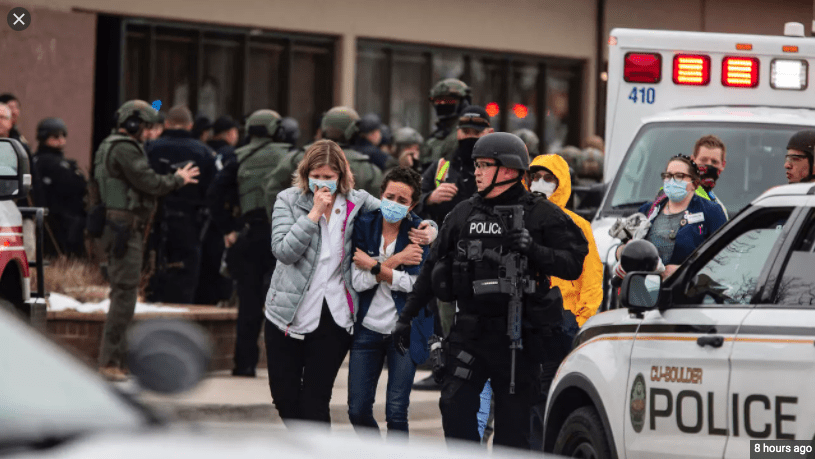 It was only a matter of time before the first major false flag mass shooting took place on the watch of POTUS imposter Joe Biden.

How predictable that this alleged massacre would be perpetrated in Colorado just as the Columbine High School massacre was carried out by a similar OPERATION GLADIO 3 conspiracy in April of 1999.

Of course, the intention is quite similar: inflame anti-firearm sentiments in a once very conservative state where gun ownership is at an all-time high because of the brazenly stolen 2020 election.

Colorado is also a state that greatly captures the attention of both the Left Coast and the East Coast where the gun-hating, ultra-liberal ‘intelligentsia’ reside.  Now wait for the chorus of “GUN CONTROL NOW!” that will soon reverberate in the MSM echo chamber.  The CIA’s Mockingbird Media will most assuredly milk this purported massacre like there’s no tomorrow.

Why are these super-dramatic false flag mass shootings
always carried out in Colorado?

It has repeatedly been established by the SOTN over the years that The Powers That Be (TPTB) always take advantage of “March Madness” to execute society-altering schemes that need to transpire in order to significantly advance the New World Order globalist agenda.

There is absolutely nothing more vital to that nefarious NWO agenda that the effective nullification of the Second Amendment.  Until the American people are stripped of their guns, the USA will experience an unending spate of false flag mass shooting—PERIOD.

The Democrats know that eventually, especially after being under the influence of multiple doses of the various mind-altering COVID-19 injections, a critical mass of U.S. citizens will coalesce around a draconian gun control regime in all 50 states.  This is called stealthily manufactured consent by way of government-sponsored domestic terrorism…and it was made speciously ‘legal’ under Comrade Obama.

“FALSE FLAGS” are LEGAL PROPAGANDA Produced
by the Department of Defense

In light of this top-priority NWO globalist goal, the communists who own and operate the Democrat Party will conspire with Deep State and the NWO cabal to implement every gun-grabbing initiative possible during March and through the end of April. (The Columbine black operation was carried out on April 2oth.)

As for Operation Gladio, the terrorist arm of NATO (aka the North Atlantic Terrorist Organization), March Madness black ops and psyops are always carried out right through to the end of April.  Hence, the American people can expect to see a series of false flag mass shootings conducted specifically under the rubric of OPERATION GLADIO 3. 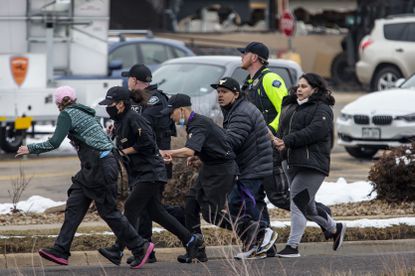 KEY POINTS: It’s virtually impossible to determine if this Boulder supermarket slaughter even occurred.  These Gladio psyops are so meticulously staged by all the usual suspects that it’s would be mere speculation to comment on this egregious act of domestic terrorism.  The mass shooting crime scenes are now so controlled by all levels of foreign-controlled law enforcement that any meaningful facts are never released to the taxpaying public.  Therefore, this mass shooting could have been completely real, totally fake or a hybrid of reality and fakery.  There’s no questions that there are always crisis actors present after the heinous crime is committed who will be interviewed with great melodrama stressing the need to ‘outlaw guns’.  Likewise, the reactions from the locals over the coming days will all be choreographed so that the prevailing sentiment presented by the MSM will be in favor of immediate gun control.  Of course, the post-mass shooting interviews — for weeks — with select globalist-controlled politicians will be orchestrated to maximize the extremely favorable impact on draconian gun control measures that will be expeditiously rolled out.  Such legislation was actually written years ago for this very moment of betrayal of the American people.

If there is one reason that reigns supreme why naked election thief Joe Biden was installed by his globalist masters, it was to finally strip Americans of their guns.  A highly compromised career political criminal like Biden can be quite easily bribed and/or blackmailed, especially in view of how cognitively debilitated, transparently demented and overly medicated on psychoactive pharmaceutical drugs he is at this very moment.

Manchurian Candidate Barack Hussein Obama was similarly installed into the Oval Office with the explicit purpose of removing the constitutional right to bear arms, which he failed to do.  Even a cursory examination of the countless false flag mass shootings that were purposefully conducted on Obama’s watch indicates just how desperate they were to cancel the 2nd Amendment.  Biden was intentionally positioned as Obama’s VP because his handlers knew he could be coerced into doing anything in service to his globalist masters, just as he will today—ANYTHING! ! !

Well, that “anything” translates to nothing less than “The GREAT GUN GRAB of 2021″.

Look it, people, TPTB have already pulled off THE GREAT SCAMDEMIC, THE GREAT STEALECTION and the ongoing GREAT RESET.  What, pray tell will stop them from attempting the GREAT GUN GRAB of 2021?

It’s clearly time to arm up, ammo up and protect the sacred constitutional right to bear arms in order to protect our families and communities, YES?!?!?!?!

2 Responses to “The GREAT GUN GRAB of 2021 Begins with the Staged, False-Flag, Mass Shooting in Boulder CO”