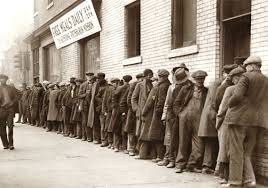 [Since this post is blowing up, here’s a link to my blog if anyone wants to subscribe: https://jenwalker.substack.com]

Economic depressions are planned and executed by the ultra-wealthy. Millionaires lose everything and commit suicide. Billionaires get richer.

Why would anyone want something like the Great Depression to happen? Four words: buy low, sell high.

Ever see that movie The Producers? Billionaires accumulate wealth and power much more quickly with a periodic boom-bust cycle than they ever would with non-stop growth. Long periods of continuous growth cause wealth to redistribute downward over time, and they certainly can’t have that.

Wealth is only the means. Their really aim is control. Money is something the ultra-wealthy invented to keep poor people fighting over useless scraps of paper. They don’t even pretend that the paper is attached to anything valuable anymore.

ADDENDUM: Someone asked me how the ultra-wealthy do this. There are multiple methods but one of the most common is to create runs on stocks they own to boost their value. Since 90% of media outlets are centrally controlled by the ultra-wealthy, this is very simple and generates the illusion of genuine buzz around the stocks since “everyone’s talking about them.”

Next, the wealthy sell off their stocks at the peak of the feeding frenzy and then direct their media outlets to start questioning if the inflated stocks are overvalued. This triggers panicky investors to sell off their stocks which creates a chain reaction resulting in an economic bust. Rinse and repeat.

For a good example of this process in action, look at the dot-com bubble of the late 90s.

[deleted by user] from conspiracy