Kids are due to return to school on Monday 8th March and authorities have demanded that they take part in an asymptomatic testing nightmare by taking a Lateral Flow Test twice a week. The returning pupils must also wear face coverings in the classroom and the corridor, meaning they could be wearing the harmful and ineffective garments for up to 8 hours a day.

But the Royal Statistical Society have major concerns about the reliability of the Lateral Flow Test kits, especially when used to test someone showing no symptoms whatsoever of the alleged Covid-19 disease.

They have demanded transparency about roll-out and detailed data on both secondary pupils’ voluntary compliance with and results from twice-weekly asymptomatic screening.

As well as stating the risk of inaccurate test results by stating ‘while the usual concern with LFTs is false negatives, when infection-prevalence is low there is also a risk that the majority of ‘positive’ tests could be false positives’.

The credentials of INNOVA LFTs in the context of mainly adult asymptomatic screening were evaluated in Liverpool in
November/early December 2020 when twice weekly screening was offered to the citizens of Liverpool. Uptake was
modest with only a quarter of Liverpool’s citizens attended at least once for screening. Around 0.5% were LFT-positive for the alleged SARS-CoV-2 virus.

But the Royal Statistical Society state that ‘corresponding LFT credentials for children are lacking. Children have a lower tolerance than adults for dual testing as shown by pupils’ low participation rate when staff and pupils at appropriately sampled schools were invited to take part in the Schools Infection Survey designed by the Office for National Statistics (ONS). Only 15% of 50,000 eligible pupils
(secondary or primary) and 43% of 22,000 eligible staff provided at least one of two requested samples (for antigen and
antibody testing respectively).’

‘The INNOVA LFT test is highly specific, at least 99.8%, so that at most 2 false positives are expected per 1,000 pupils
tested. However, if the true infection rate reduces from 5 to 2 per 1,000 LFT-pupils before Easter, then more LFT positives will be false-positives than true positives.

Then, of these 2,000 infected secondary school pupils, LFTs may signal positive in only 40%, or 800. The 1,200 missed
true-positives are just that – missed. Meanwhile, of 998,000 LFT-tested secondary pupils who are uninfected, 1,996 pupils may receive a false-positive. 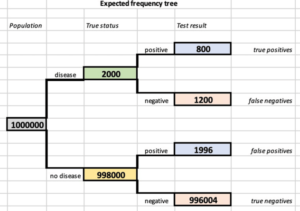 If the Government continues with this disastrous policy, which it no doubt will, then we are going to see thousands of pupils having to remain at home and miss out on even more of their education for no reason at all.