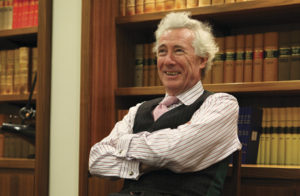 Jonathan Sumption was once the epitome of the Establishment — a brilliant barrister who represented the Government in the Hutton enquiry, Supreme Court Justice, supporter of the Remain campaign and esteemed historian of the Hundred Years’ War. But then Covid happened.

Over the past year, his unabashed criticism of lockdown policies has turned him into something of a renegade. It is a development that mystifies him; as he sees it, his views have always been mainstream liberal, and it is the world around that has changed.

In the course of our conversation, the retired judge doesn’t hold back. He asserts that it is becoming morally acceptable to ignore Covid regulations, and even warns that a campaign of “civil disobedience” has already begun.

You can read what he really thinks below. And watch our interaction on Lockdown TV — it was a fascinating conversation.

“Sometimes the most public spirited thing that you can do with despotic laws like these is to ignore them. I think that if the government persists long enough with locking people down, depending on the severity of the lockdown, civil disobedience is likely to be the result. It will be discrete civil disobedience in the classic English way — I don’t think that we are likely to go onto the streets waving banners. I think we will just calmly decide that we are not going to pay any attention to this. There are some things you have to pay attention to: you can’t go to a shop if it’s closed. On the other hand, you can invite friends round for a drink, whatever Mr Hancock says. People are doing that to some extent already.

“Everyone will have their own different threshold. But I think that in the eyes of many people who disapprove of the lockdown, and some people who approve of it, we’ve reached that point quite a long time ago.”

ON THE ETHICS OF LAW-BREAKING:

“I feel sad that we have the kind of laws which public-spirited people may need to break. I have always taken a line on this, which is probably different from that of most of my former colleagues. I do not believe that there is a moral obligation to obey the law… You have to have a high degree of respect, both for the object that the law is trying to achieve, and for the way that it’s been achieved. Some laws invite breach. I think this is one of them.”

“[Thomas] Hobbes believed in the absolute state — it didn’t have to be a monarchy, but it had to be absolute. He said that there was nothing short of the state actually killing people that the state should not be entitled to do. He was not, let us say, a believer in liberty. This is because of his experience of the anarchy which flowed from the civil war in England. Hobbes believed that we resign our freedoms unconditionally and permanently into the hands of the state, in return for security. Now, this is a model which ever since the rise of a recognisable form of modern Liberalism in the middle of the 19th century, has been almost universally rejected. But we have tended to revert to it during the current crisis. And I think that that is a very striking and very sinister development.

ON THE DANGERS OF PUBLIC FEAR:

“John Stuart Mill regarded public sentiment and public fear as the principal threat to a liberal democracy. The tendency would be for it to influence policies in a way that whittles away the island within which we are entitled to control our lives to next to nothing. That’s what he regarded as the big danger. It didn’t happen in his own lifetime; it has happened in many countries in the 20th century, and it’s happening in Britain now.”

ON THE FRAGILITY OF DEMOCRACY:

“Democracy is inherently fragile. We have an idea that it’s a very robust system. But democracies have existed for about 150 years. In this country, I think you could say that they existed from the second half of the of the 19th century — they are not the norm. Democracies were regarded in ancient times as inherently self-destructive ways of government. Because, said Aristotle, democracies naturally turn themselves into tyranny. Because the populace will always be a sucker for a demagogue who will turn himself into an absolute ruler…

“Now, it is quite remarkable that Aristotle’s gloomy predictions about the fate of democracies have been falsified by the experience of the West ever since the beginning of democracy. And I think one needs to ask why that is. In my view, the reason is this: Aristotle was basically right about the tendencies, but we have managed to avoid it by a shared political culture of restraint. And this culture of restraint, which because it depends on the collective mentality of our societies, is extremely fragile, quite easy to destroy and extremely difficult to recreate.”

ON BEING A LIBERAL:

“I regard myself as a liberal with a small L. Until the Covid outbreak, that was a very middle of the road position to be in. Since the outbreak, it’s become controversial, even in some people’s minds extreme. This is, I think, some indication of how far our national conversation has moved.”

ON WHAT THE GOVERNMENT SHOULD LEARN:

“My first proposal is that governments should not treat information as a tool for manipulating public behaviour. They should be calmer than the majority of their citizens; they should be completely objective. My second lesson would be that governments dealing with scientific issues should not allow themselves to be influenced by a single caucus of scientists. They should always test what they are being told in a way that, for instance, judges test expert opinion by producing a counter expert, and working out which set of views stacks up best.”

“I would very much have preferred the kind of points that I have been consistently making for the last year to have been made by just about anybody else. Those colleagues or former colleagues who disapprove of what I’ve been doing have got a perfectly good point. But there are some issues which are so central to the dilemmas of our time, which are so important, where I think that you have to be prepared to stand up and be counted.