By MARTIN ROBINSON and MARK DUELL FOR MAILONLINE

ITV has released its first branded clip of the Duke and Duchess of Sussex’s interview with Oprah Winfrey as the broadcaster vows to release the two-hour show despite Prince Philip’s ongoing health problems.

The channel released a trailer at 4pm today ahead of the two-hour show next Monday, which featured the same footage put out by CBS in the early hours of this morning – but this time with ITV’s branding in the corner.

The video clip from Meghan and Harry’s interview – which was filmed last month in California, and has been licensed by CBS owner ViacomCBS to be shown in 63 countries in addition to Britain and the US – saw the Duchess say she could not be expected to stay silent if the royal family played a part in ‘perpetuating falsehoods’ about her and Prince Harry.

ITV has faced furious backlash at its decision to push ahead with broadcasting the interview while Harry’s 99-year-old grandfather Prince Philip  recovers from heart surgery in hospital – where he is set to remain ‘for a number of days’.

Today’s clip was in an updated press release – which had first been issued with words only at 12pm yesterday – with ITV confirming in a tweet today: ‘Oprah With Meghan and Harry broadcasts at 9pm on Monday, March 8 on ITV.’

The interview will first be shown by CBS in the US at 1am UK time on Sunday night. Meanwhile Buckingham Palace said at 1pm today that a special Commonwealth programme would be aired just hours beforehand on the BBC.

The Queen and the Royal Family have turned their attention to the global impact of the coronavirus pandemic for the show which will be on BBC One in the UK and globally on the BBC’s YouTube channel from 5pm on Sunday.

Meghan’s ramping up of the war of words with the palace came as: 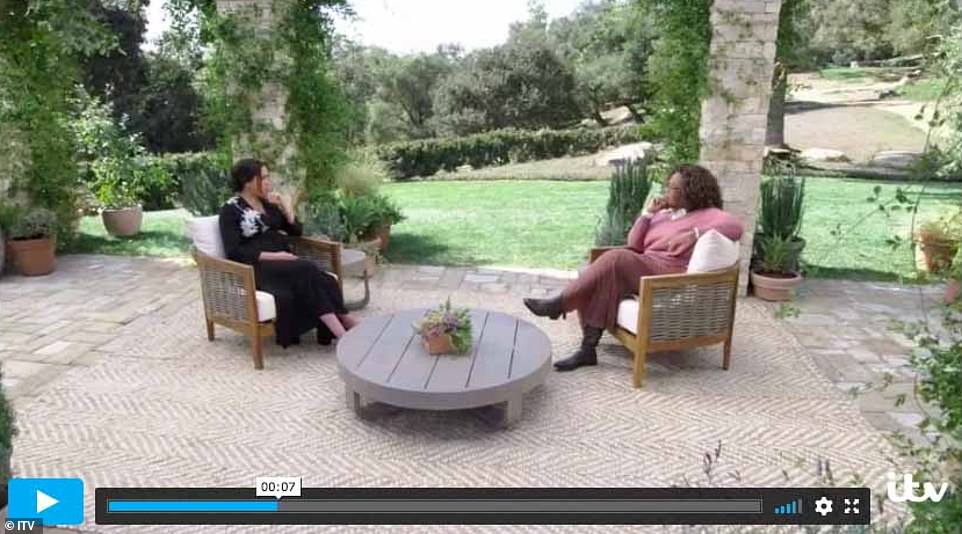 ITV released a trailer at 4pm today ahead of the two-hour show next Monday, which featured the same footage released by CBS in the early hours of this morning – but this time with ITV’s branding in the corner (bottom right)

3 Responses to “Is Prince Philip’s emergency heart surgery due to the accusations of killing Lady Di or new allegations from Meghan Markle?!”