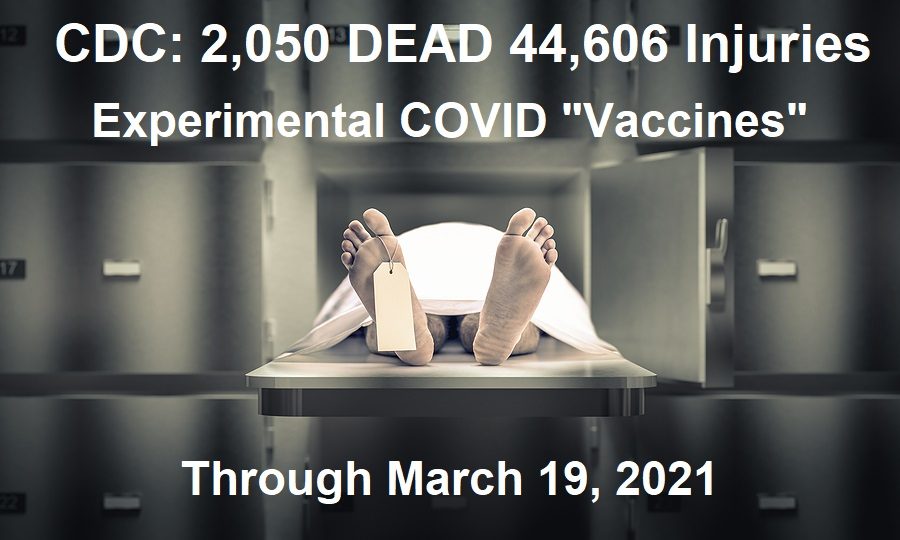 The data released by the CDC today goes through March 19, 2021, with 44,606 recorded adverse events, including 2,050 deaths following injections of the experimental COVID “vaccines.” 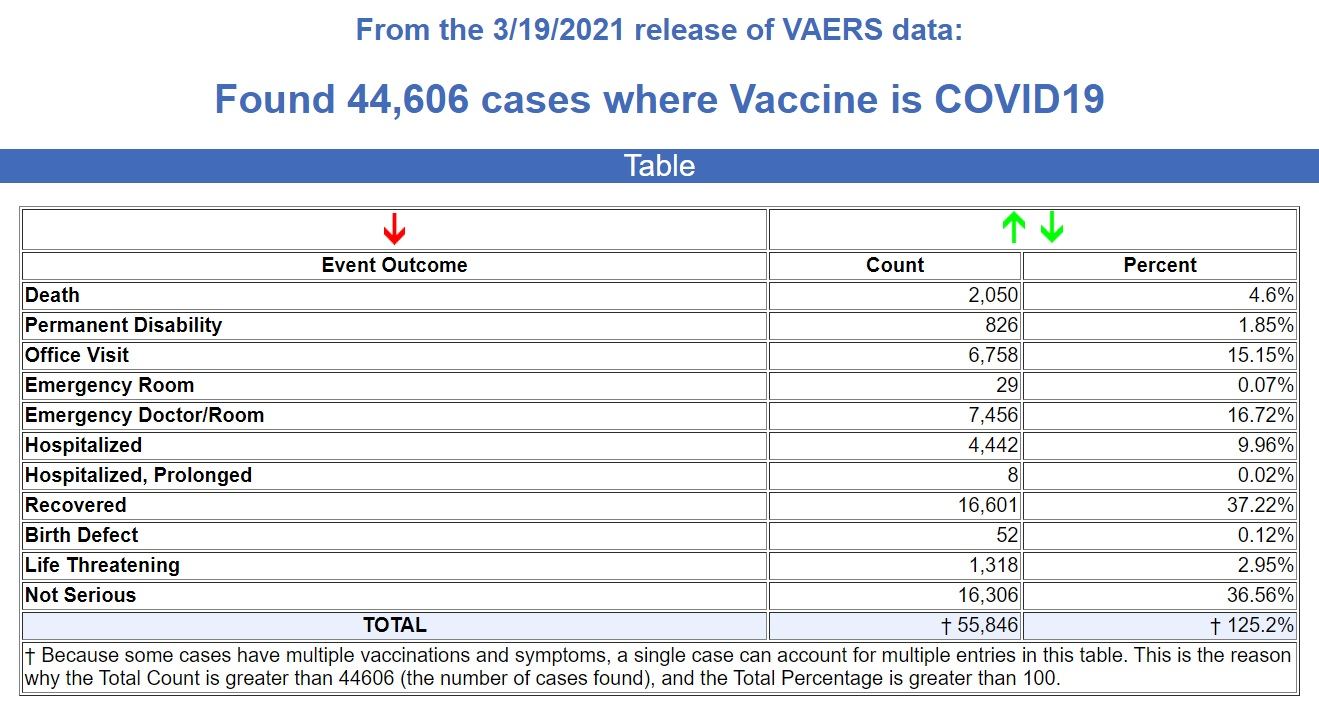 Besides the recorded 2,050 deaths, there were 7,485 visits to Emergency Room doctors, 826 permanent disabilities, and 4450 hospitalizations.

There are now 1,107 adverse events including 16 deaths reported following the third experimental COVID vaccine to be granted emergency use authorization (EUA) by the FDA at the end of February, the Johnson and Johnson Janssen COVID vaccine.

I have not seen any report yet from the CDC regarding this third experimental COVID “vaccine,” which is the agency tasked with monitoring adverse effects on new experimental vaccines that are not FDA approved and given emergency use authorization (EUA).

But from the data released today in VAERS, there are some troubling signs, especially from the 16 deaths reported.

Two of the deaths reported stated that the patients exhibited signs of symptomatic COVID, and a third death also reported symptoms similar to COVID.

VAERS ID: 1111699 – Patient developed symptomatic COVID infection with symptoms starting 3/13, was admitted to the hospital for respiratory failure on 3/16 and expired on 3/18/21

VAERS ID: 1102815 – Patient presented to hospital on 3/11 with shortness of breath. History of chronic oxygen dependency at night. Became more sob over last several days and was not able to make it to md appointment. Had a recent abnormal stress test. Family states she was febrile at home. Was low on oxygen level on 2LNC, placed on non-rebreather and then BIPAP. Positive for Rhinovirus. Chest xray showed bilateral lower infiltrates. Patient detiorated through the night and was intubated and placed on vasopressors for septic shock. Patient was made DNR and family refused hemodialysis. Family then made decision to withdraw care.

Another case of death reported that the patient had “Respiratory arrest” before suddenly dying.

VAERS ID: 1112122 – Patient was admitted for Multi drug resistant UTI (for which he has been admitted many times before). Was hospitalized for 3 days while awaiting cultures, hemodynamically stable, with no lab abnormalities. On the day of discharge (sensitivities to UTI came back, pt to be discharged on cefepime, had PICC line) pt got up from bed, sat on the edge of the bed and was being given belongings by the nurse, alert and oriented and in a pleasant mood, when suddenly pt grabbed at his chest and stated “I can”t breathe” and became combative and altered when O2 was attempted to be placed on pt”s face; then pt had PEA arrest x3 and unable to achieve ROSC.

The CDC’s position remains that these mRNA type of “vaccines” cannot cause COVID, but the epidemiological evidence so far contradicts this “fact” by the CDC. See:

Fully Vaccinated People Testing Positive for COVID – So How Does the “Benefit” of Experimental Vaccines “Outweigh the Risk”?

Three of the deaths recorded after the Janssen experimental COVID injection were reported to be due to sudden cardiac arrest.

VAERS ID: 1110099 – 3/12/21 Sudden cardiac arrest at home; unable to be resuscitated at scene (Brother) Caller is a family friend who was asked by family to call and report incident. If f/u is needed, please contact him first.

VAERS ID 1098028, a 32-year-old male from New York who died from cardiac arrest, appears to be Benjamin Goodman’s case that we reported on earlier this week from The COVID Blog.

However, the second victim in that story, 25-year-old Desirée Penrod from Connecticut, does not appear to be listed yet, so who knows how many other deaths have not yet been recorded or released yet by the CDC.

The CDC continues to maintain that none of these deaths were caused by the vaccines. They are all “coincidences.”

A review of available clinical information including death certificates, autopsy, and medical records revealed no evidence that vaccination contributed to patient deaths. (Source.)

Please be aware that because the CDC’s position is that the experimental COVID “vaccines,” which are NOT FDA approved, are safe and effective, that if you do suffer an injury due to one of these injections, that you are pretty much on your own to try and find any relief, as these are experimental products that have never before been tested on humans, and there are no health care professionals, either in the medical system or in alternative health, that have any knowledge about how to treat injuries from these injections.

There is no going back and undoing the damage they may cause. And there is no hope for financial compensation because the pharmaceutical companies basically have legal immunity due to the “pandemic.”

The CDC is not concerned with your health or the health of your family. They are concerned with protecting Big Pharma and their experimental products.

The U.S. Centers For Disease Control – A History of Corruption

The Corruption of Science: Who Funds Vaccine Safety Studies?