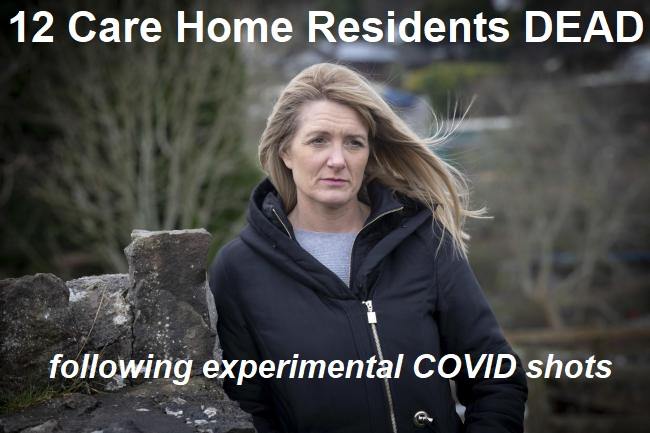 In a tragic story that has been repeated multiple times here at Health Impact News, a nursing home for people with dementia has seen 12 of their residents die shortly after they received one of the experimental COVID vaccines, while 36 residents and 54 staff are now testing positive for COVID.

And as in all previous stories we have published like this, the experimental vaccines are not even being considered as a cause. The North Wales Chronicle reported:

A DEVASTATED care boss who fought a valiant battle to protect her care home from the grip of Covid has spoken of the painful “empty feeling” after 12 much-loved residents died.

Jodie Jones, manager of Fairways Newydd Nursing and Dementia Care Centre in Llanfairpwll, Anglesey has described the shattering outbreak at the home as the worst experience of her long career.

The home, which has enjoyed a renaissance since being saved from potential closure by Fairways in 2017, had taken great steps to try and prevent any outbreak of Covid and all residents had recently had their first vaccine.

Home bosses remain in the dark about how the virus broke out in the home, given the stringent measures they put in place to prevent any outbreak which had been acknowledged in inspection reports.

Mrs Jones has expressed her anguish at seeing the impact the outbreak has had at the home, which caters for residents with dementia as well as others such as the elderly.

“It is heartbreaking to lose so many residents,” she said. “All of them were very popular with staff and we are devastated to have lost each of them.

I’ve always said it is not like working in a hospital, where patients come and go. The residents are with us for months and years

A proper bond is built up and the residents become like family. We see them more than we do our own families.

So, when any resident passes away it hits the staff hard. It upsets them to walk past the bedrooms and realise a resident is no longer with us.

Our thoughts are very much with their families at this incredibly difficult time.”

Mrs Jones, 40, has spent all her adult life working in the care sector and has been at Fairways Newydd since 2017. She became manager the following year.

“This is without doubt the worst experience I have ever had in my career,” she said.

“There’s such an empty feeling. The people who live here are not just a number, they are part of our lives.

Whenever I am interviewing staff, I always tell them that I want them to look after residents the same way they would their nain, taid, parents or any other close family member. They treat them with the care they would for their own family.

It really has hit everybody hard. The staff are grieving for the residents we have lost.”

The home had reportedly suffered a COVID outbreak last year that they handled well. So how do they explain this current outbreak that occurred just after injecting the residents with the first dose of one of the experimental COVID shots, which has resulted in so many deaths?

She believes the new variant of Covid-19 is likely to have been responsible for the outbreak in recent weeks, which has led to a total of 36 residents at the home testing positive along with 54 staff.

The home has not yet received confirmation that the positive Covid tests were for the new variant of the virus.

However, Mrs Jones believes the way the home was able to successfully contend with a small Covid outbreak last year is a clear indicator that something has been different this time around.

“We dealt with this outbreak in exactly the same way as the previous one and were confident we knew what to do,” she said.

“However, the fact that this has been so different suggests it may have been the new variant.”

As we have repeatedly seen in these stories, so strong is the belief in vaccines that they are never considered to be the cause of death, even when given in close proximity to the deaths.

Instead, in this case they are blaming it on the “new variant” even in the absence of any testing or data to back up such a belief.

Are Senior Home Staff being Threatened to Keep Quiet about the COVID Vaccines?

We have published a couple of stories now on whistleblowers who have come forward to explain what they are seeing with these deaths, and they are saying that there is pressure to cover this up. See:

It seems strange that someone like Mrs Jones, who obviously cared deeply for her residents and appears to be going through emotional trauma, would not at least question the possibility of the vaccines having some blame.

The Health Impact News reader who shared this story with us wrote:

This appeared in our local Chronical, and it was also reported in our Daily Post with one subtle difference. In the Chronicle version it mentions that the residents had recently had the Vaccine (but not in the Post version.)

So in some of the reporting on this tragic incident the fact that the residents were vaccinated with an experimental COVID vaccine was apparently removed from the original text. It certainly appears that they want to promote the narrative that there is a new killer strain of COVID out there causing these deaths instead.

There is no doubt a lot of pressure now to censor this kind of information as the pharmaceutical industry ramps up to produce more COVID experimental vaccines that need to be used up in a certain amount of time.

I myself have received death threats from people (cowards, because they never use a legitimate email address I can respond to) emailing me as Editor of Health Impact News.

And some family members of the people who died following these experimental injections have also emailed me and threatened to sue me if I do not take down their stories.

But these stories are not coming down. At least not by me. I am standing on the principles of the First Amendment which gives me a legal right to publish these stories, and my faith in God to protect me as I continue to publish the truth.

This is the verdict: Light has come into the world, but men loved darkness instead of light because their deeds were evil.

Everyone who does evil hates the light, and will not come into the light for fear that his deeds will be exposed.

But whoever lives by the truth comes into the light, so that it may be seen plainly that what he has done has been done through God. (John 3:19-21)